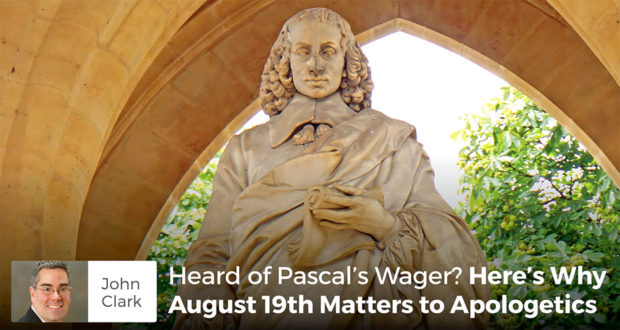 John Clark breaks down Pascal’s Wager into handy thoughts. It’s a challenge to live as though God existed, and it’s infuriated atheists for centuries.

August 19 marks the anniversary of the death of Blaise Pascal.

An indisputably brilliant French mathematician, Pascal also made one of the most enduring—if not endearing—apologetic arguments in history. It is known as “Pascal’s Wager,” and it goes something like this.

Though reason alone cannot definitively tell us either way, this much we know for sure: “either God exists, or He does not.” With your existence, you were born into the game; not playing is not an option. As to whether God exists or not, you must place a bet, or wager.

Each option contains its own risks and rewards. If you wager that God DOES NOT exist, you will live your life as though He does not exist. The REWARD of that wager is that you don’t have to honor God, nor keep the commandments, nor pray, and so forth. The RISK is that, if you’re wrong, you will spend eternity in Hell.

If you wager that God DOES exist, you will live your life as though He does exist. The RISK is that you must live a generally moral life on earth, meaning that you might miss out on some sins you’d like to commit, waste some time in prayer, and so forth. (We come back to this point in a minute.)

The REWARD of that wager is eternal happiness in Heaven.

In many ways similar to Aristotle’s claim in the Nicomachean Ethics two millennia earlier, Pascal’s position is that the person who believes that God exists and lives accordingly will likely be happier than the one who does not; therefore, he is surrendering nothing.

As Pascal puts it, “Now, to what harm will you come by making this choice? You will be faithful, honest, humble, grateful, generous, a sincere friend, truthful.”

For Pascal, the Wager was not only about belief; it was about living a virtuous life.

Almost since the moment it was penned, Pascal and his Wager have had their share of critics, as we shall see.

From a Christian perspective, Pascal’s Wager seems askew. It’s easy to view Pascal as a card counter at the Blackjack table of theology, and it seems inappropriate to reduce man’s relationship with God to a game. Further, Pascal seems to make vital concessions to the atheist opposition.

In his defense, we should observe that Pascal is making a rhetorical concession, not a personal one; after all, Pascal professes Christianity.

But Pascal is essentially saying: My friend, I, as a Christian, and you, as an atheist, are struggling to find common ground. Can we find something—some logical principle—that we agree on? At minimum, can we agree that a being either exists or does not exist?

Can we further agree that God either exists or He does not? Can we proceed on that basis?

At that point, Pascal proceeds to analyzing the wager on a risk/reward basis, and on that level Pascal concludes that in the entire history of risk management, nothing has ever been clearer: choose God.

They often argue that even assuming Pascal is correct, that does not aid them in discovering the true God. Therefore, they claim, the argument is faulty.

That’s an unfair criticism. The Wager does not purport to be a full-blown theology; rather, it suggests the importance of investigating God—seeking answers about God and overcoming ignorance.

While Pascal’s Wager implies that we be should be informed about God, it is often the atheist/agnostic who promotes ignorance or indifference.

In fairness, many atheists admit that it is impossible to prove that God does not exist. (Those who do not make that admission often fall into some version of the fallacy of ignorance, i.e. “I’ve never seen God; therefore He does not exist.”) Their thought process goes: Since He probably does not exist, I’m not wasting my precious time investigating anything about God.

Ironically, though Christians are often accused by atheists of being ignorant, many atheists practice the darnedest example of lazy incuriosity of which a human is capable.

What If You’re Wrong?

Some years ago, celebrity atheist Richard Dawkins gave a presentation about atheism, after which someone asked him a very pithy and entirely appropriate question: “What if you’re wrong?”

Faced with that question, Dawkins delivered his mocking answer, to which the audience cheered and applauded and snickered and giggled. I’ll say this for Dawkins: he knows how to win over a crowd of college students in post-logic America; which is to say, he doesn’t win the rhetorical argument, just the sophomoric crowd.

In under sixty seconds, Dawkins committed the circumstantial ad hominem, straw man, and non sequitur fallacies. And why not? After all, once you’ve taken logic off the table, anything goes. As they might say in his native land, “in for a penny, in for a pound.”

But within this primordial soup of fallacies, Dawkins makes a startling admission: “Anybody could be wrong.”

What? Your rebuttal to Pascal’s Wager is “anybody could be wrong?” Really? Um, that’s not a rebuttal of Pascal—that’s a restatement.

The fact that Mr. Dawkins and his audience find the very idea of God laughable or incomprehensible is not an argument.

As Blaise Pascal put it, “Everything that is incomprehensible does not cease to exist.”

One of Many Arguments

Pascal’s is probably not the favorite argument for many Catholics; in his list of twenty arguments for the existence of God, Peter Kreeft lists it last.

It proceeds more from mathematics than from love; further, it is theologically imprecise.

Yet, what it lacks in precision, it makes up for in inescapability.

Perhaps that is why it also tends to be the most unpopular argument for atheists.

As an apologetic tool, perhaps we can attempt to employ elements of it to speak with those who refuse to listen to better arguments.