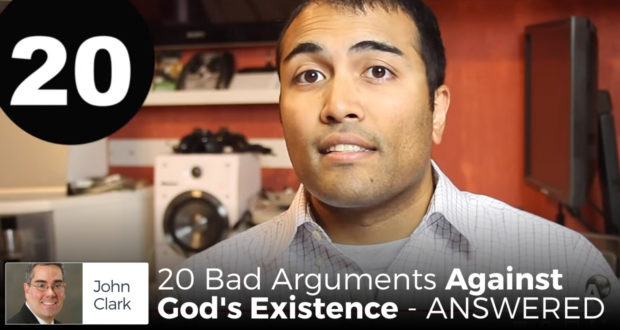 I quickly dismissed it as something that should have been called 20 Bad Arguments Against God’s Existence. (Clearly, I wasn’t consulted on the title.)

But the more I thought about it, the more it struck me that videos like this are how young people often form their thinking. For the most part, our young people are no longer reading Plato, Aristotle, Augustine, Aquinas, Cajetan, Duns Scotus, Bonaventure, or Boethius.

They are watching vlogs that ignore the totality of the Western Canon. Therefore, since some people might view this video—and videos like it—and be unaware how to answer these objections, I decided to take a few moments between home school lessons and answer all twenty.

Before we discuss the actual arguments, we have to address the statements that contain the most flagrant fallacies:

Number 11 begs the question too, and can therefore be logically dismissed, but it’s too tempting to just let it go by. The argument is that every thing that is thought to be a miracle “gets debunked eventually.”

Just for fun, let’s play out that hand. The argument is meant to prove something that cannot be proved or disproved. If you are going to make these comments, you might also consider making these:

You might find these statements hard to swallow, but you cannot disprove any of them.

“Sure, that tilma at Guadalupe should have disintegrated in twenty years, much less five hundred years. But eventually…even if it takes a million years to disintegrate…eventually, that tilma will disintegrate. And then those Christians will feel foolish.”

It’s still a rather silly argument, but at least it refers to real life.

Numbers 10 (love should be unconditional) and 14 (equivalence between non-existence and invisibility) fall under the fallacy of ipse dixit, which translates to English as: “He himself said it.”

Sometimes, you can feel yourself falling into this fallacy when you begin to sound like the worst line from a cheesy romance or a bad sci-fi movie. “Love shouldn’t come with a list of conditions” and “The invisible and the non-existent look very much alike” fit the bill.

Ipse dixit is a statement whose value rests solely on the authority of the person making it. It is pontification for the common man. Sometimes referred to as the less catchy (or at least, less Latin) fallacy of “bare assertion,” ipse dixit is not an argument; it is the absence of an argument.

Not that there isn’t a place for ipse dixit; there is. Madison Avenue loves ipse dixit. Case in point, Calvin Klein’s advertising campaign famously proclaimed: “Between love and madness lies obsession.”

It’s short on logic, but then again, they weren’t trying to win any philosophical arguments; they were just trying to sell perfume.

Numbers 13 (Christian media has a subpar entertainment value) and 18 (religious people “sound crazy”) are ad hominems and non sequiturs. In other words, they are irrelevant character attacks.

They’re easy to make, and they might produce a chuckle, but they are not actual arguments. If I were at a Creation conference and I claimed that the eleventh plague was the show-stopping halitosis of atheists, I would probably make a lot of the audience laugh, but I wouldn’t be making an argument in any meaningful sense.

The logic of number 12 (the Decalague failed to mention some obvious moral evils) goes like this. Unless God explicitly prohibited something in the verbiage of the Ten Commandments, God does not consider it a sin.

Therefore, since some morally objectionable things are not explicitly mentioned in the Ten Commandments, the Decalogue is actually offensive.

He would have to be unaware of the many teachings of Jesus regarding sin, such as Matt 5:28, which reads: “But I tell you that anyone who looks at a woman lustfully has already committed adultery with her in his heart.”

He would have to be unaware of the Epistles as well, such as Corinthians 11:29, which reads: “For those who eat and drink without discerning the body of Christ eat and drink judgment on themselves.”

In reality, neither Judaism nor Christianity claims that all forbidden actions are confined to the explicit statements of the Decalogue. For someone to claim otherwise is to commit a fallacy known as the straw man fallacy. The straw man fallacy occurs when someone restructures an argument to make it easier to argue against. This is exactly what occurs here.

Statement number 7 (Geography dictates belief) is verifiably inaccurate; mere observation tells us otherwise. Statistically, in America, you probably have a different faith than your next-door neighbor.

Here’s an example: “Of course John thinks Pete Rose was a good baseball player. John is a Reds fan.”

Of course, if 7 is true, it’s true for atheists also. If an atheist says to you: “You only believe that only because you were born in a Christian country,” you can respond by saying: “No, I believe that because reason and my Faith both lead me to the same conclusion.

“But if your point is that people believe something just because of where they are born, and you are an atheist, can I inquire as to whether you were actually born on a college campus?”

There is one objection (number 8) that regards metaphysics. He asks, “Who created God?”

This three-word question requires exactly two words to answer: no one. Nothing can create itself. Oh, and while you’re digesting that idea, remember that primordial soup can’t create itself either.

As the saying goes, “Soup’s not a meal.” Nor it is an explanation for the material universe; alas, there was no consummation of consommé.

Turns out, Rodgers and Hammerstein were quite the metaphysicians when they wrote: “Nothing comes from nothing. Nothing ever could.” Something or someone had no beginning. And there’s no way around that fact. This question was asked and answered by Greek philosophers over 2,300 years ago, centuries before the advent of Christianity.

These objections fall under the heading of the problem of evil, which is sometimes referred to as “theodicy:”

Stated a bit more academically, the question is thus: How do we explain the presence of suffering in a world created by a good God? It’s not a new question, nor is it one asked only by atheists. Most famously, many years ago, it was asked by a man named Job.

Where were you when I laid the foundation of the earth? Tell Me, if you have understanding, Who set its measurements? Since you know….
Have you comprehended the vast expanses of the earth? Tell me, if you know all this….
Do you know the laws of the heavens? Can you set up God’s dominion over the earth?…
Do you give the horse its strength or clothe its neck with a flowing mane?…
Does the eagle soar at your command and build its nest on high?

Whether one believes the above are the words of God or not, this makes a terrific point. Here’s why. The atheist who is troubled by evil insists that a good God would not allow evil. Yet, this very statement implies that the atheist understands what is ultimately good and ultimately evil. Does he? How did he come upon this knowledge?

Ultimately, the essence of the atheist argument is that every aspect of God must be understandable to him; otherwise God must not exist. That’s the kind of hubristic statement that might make a certain Friedrich Nietzsche blush, isn’t it?

Regarding misfortune, we have all had things happen in our lives that seemed bad at the time, but turned out to be good, or even great. St. Thomas Aquinas explains that while man sees only a small portion of the road, God sees the whole road. And because He sees the whole road, He is in a unique position to determine what evil to allow.

Is it possible that an omniscient God allows some evil (or, as a Thomist might say, a “lack of good”) with His permissive will so that He may bring a greater good out of it?

Ultimately, I may never understand it fully, either in this life or the next; but my lack of understanding does not negate God’s existence.

Number 6 ponders how you know you are worshiping the right God.

Now, under different circumstances, this would be a fair question. But remember that the author’s intention is not to actually answer this question; otherwise, the title of the video is hard to explain.

The question parades as an interrogative sentence, but is actually a declarative one, essentially declaring this: Some people worship false gods; therefore, every God is false. How does that follow?

But let’s take the argument at face value. Phrased more completely, the argument goes: With all these thousands and thousands of different religions, how can you possibly conclude that you, of all people, practice the right one? But the truth is that there aren’t too many. In fact, more half of the world’s population belongs to a total of two religions.

Not a thousand. Not a hundred. Two.

Hinduism has 900 million followers, and it finishes third. To imply that there are thousands of different religions is largely false.

As far as atheism vs. theism is concerned, consider this. For atheism to be wrong, billions of people who profess a faith in God do not need to be right. Only one of them does.

Then we return to the initial question: How do we know that we are a member of the right Faith?

In her two-thousand year history, the Church and her members have devoted considerable literature to answer that very question.

It’s a branch of theology we call apologetics. It is where faith and reason, which never contradict each other, unite.