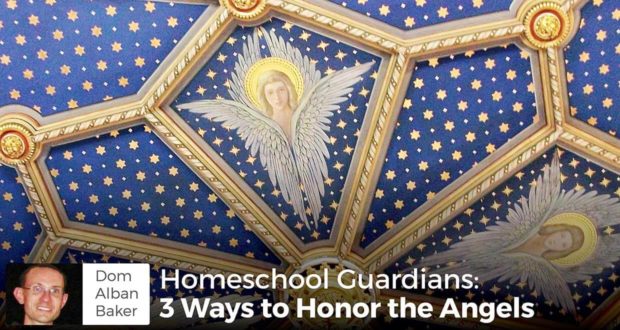 Dom Alban Baker advises making efforts to honor our Guardian Angels, recognizing and increasing the important role they play in our homeschooling endeavor.

In the opening verses of the eighteenth chapter of the Gospel according to Matthew, Our Lord speaks about children and the kingdom of heaven.

After noting the importance of becoming children on the spiritual plane, Jesus praises receiving children in His name while condemning those who cause them scandal.

For a reason why we should always protect and honor children, He gives as evidence their guardian angels.

It is no coincidence that the locus for the Church’s teaching on guardian angels is also a powerful testimony to the value of homeschooling. This aspect of Our Lord’s teaching ought to motivate us, in this month dedicated to the angels, to increase our personal and familial devotion to them.

Thomas Aquinas, in union with the Fathers of the Church, especially Jerome, teaches that each human being has his/her personal guardian angel from birth. Thomas says this is because God has ordained that variable beings be moved and guided by invariable beings; we as humans can and do change as regards our fidelity to truth and goodness, while the good angels never waver.

Therefore God appoints them to guide us to beatitude, since they already behold His face, which as Augustine explains, should be understood as “the manifestation of Himself.”

The angels’ guidance of us has two aspects, both in line with our nature: the one is on the intellectual plane, the other on the moral plane. Aquinas notes that whereas we as humans have the principles of reality (such as non-contradiction) firmly in our mental grasp, we often differ regarding the conclusions we draw from such principles.

All may agree that something cannot be and not be in the same way at the same time, but when that must be applied to a controversial topic such as the nature of God, man’s duty of religion, societal norms, or marriage, to name a few, humans vary greatly in their inferences.

Hence the value of guardian angels. Gregory the Great writes,

The angels that watch over us from our birth always see the face of God, meaning they see His essence and see all reality in His essence. Does this sound like a useful resource for homeschooling? Yes!

Our angels can help guide the minds of both the teacher and the students, moving them to helpful insights, keeping perspective, ordering all things to higher levels of reality, ultimately to God. It is the mark of a wise mind that all intellectual subjects are seen in relation to others, and the angels excel at this, given that they see all things in God, the source of all things.

As for the moral plane, it’s obvious that we waver constantly. We make firm resolutions not to sin again, and then when a temptation arises or an unexpected event occurs, we’re fatigued or downcast, we fall into sin again. Our intellectual commitment to God is strong; our moral commitment is less so.

Again, the guardian angels assist us here. Thomas teaches that for us to do good actions, we must first be inclined toward good, which is accomplished by grace and the infused virtues, and second, we must “discover the proper methods to make perfect the good of virtue.” It is the latter that our appointed helpers do for us: God teaches us through the angels how to make good on our moral resolutions.

St. Paul teaches that the ten commandments came to Moses through the ministry of angels; our angels help us to take those commandments that we know so well in theory, together with the precepts of the Church and the teachings of the Gospel, and put them into action with consistency and ever greater charity.

Aquinas uses the analogy of traveling on a road: while we are on earth, we are going towards heaven, but the path is wrought with danger, both from within and without.

“And therefore as guardians are appointed for men who have to pass by an unsafe road, so an angel guardian is assigned to each man as long as he is a wayfarer.”

The angels, then, help guide the homeschooling family to heaven by directing each member along the right path, reminding him or her of the divine precepts and counsels when the time is appropriate, when the mind needs illumination, when the will needs strengthening, when the passions need to be quenched.

And since a good homeschooling family is more concerned about producing saints than scholars, the moral aspect should be especially treasured.

How can these truths be put into practice? Three simple ways: first, formally pray to your family’s guardian angels each day when beginning school and encourage students and teachers alike to silently invoke them throughout the day, especially when insight is needed or emotions are threatening.

Second, devote each Tuesday or one Tuesday a month to the guardian angels. In the Roman Missal, the votive Mass in honor of the angels is suggested on Tuesday, so that’s a fitting day to honor them. Think of a fun way to do so, perhaps reading the biblical stories that feature angels and then acting them out or having the children comment on what they like about the stories.

Third, read more about the angels from solid theological writers, whether Aquinas or Benedict Ashley, and if possible, incorporate this reading into the children’s curriculum.

By contemplating the role of the guardian angels and making some small effort to honor them and acknowledge and increase the important role they are already playing in your homeschooling endeavor, those who always look upon the face of the Father will lead us to gaze upon His face as well.