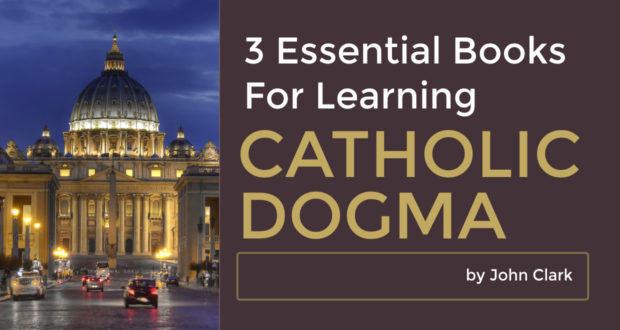 With the commotion surrounding the synod in Rome, the topic of Catholic dogma has risen to the fore. While this ensues, it is worth remembering that dogma is not the exclusive domain of the clergy. We, the laity, have a responsibility to learn dogmatic teaching ourselves. We have a duty of apologetics — that is, we must learn our Faith so we can defend our Faith.

Bishop Fulton Sheen is reported to have said that it is the laity who will save the Church. If that is true, the laity must learn their faith.

To that end, I suggest the following works. These are my “go to” books for researching Catholic dogma. I hope they help you as well.

The Catechism of the Catholic Church

Many Catholics are aware that the Catechism exists; far fewer seem to have read it or have even used it for a reference. That’s too bad.

The Catechism, promulgated by Pope Saint John Paul II, is obviously authoritative, as well as being clear and concise. Moreover, there are sections of the Catechism that are beautifully written. The Catechism of the Catholic Church wastes no time in expressing God’s love for man. In Chapter One, Section One reads:

“For if man exists it is because God has created him through love, and through love continues to hold him in existence. He cannot live fully according to truth unless he freely acknowledges that love and entrusts himself to his creator.”

“Man’s faculties make him capable of coming to a knowledge of the existence of a personal God. But for man to be able to enter into real intimacy with him, God willed both to reveal himself to man, and to give him the grace of being able to welcome this revelation in faith.”(35)

Many Catholics have formed study groups to read and learn the Catechism together. Many others could do the same. You could do the same. If you offer donuts and coffee — the virtual fifth food group of the American Catholic diet — you might have a rousing success on your hands.

Heinrich Denzinger was a priest and a professor of dogmatic theology in nineteenth century Germany. In 1854, he released the first edition of his famous book that contained a wealth of the dogmatic teachings of the Roman Catholic Church.

Since that time, Denzinger’s work has undergone dozens of editions and multiple language translations. It is a common reference for theologians and contains a vast amount of authoritative, dogmatic teaching. It is organized chronologically, meaning that dogmatic teachings are presented in the order they appeared. One could, for instance, look up the dogmatic teachings of the seventh century.

The work is rarely referred to by its title. Instead, it is almost always referred to by the name of the author. Say the word “Denzinger” in a crowd of Catholic theologians, and you’re letting everyone know that you’re about to bring out your queen. It’s the shorthand way of saying: “OK. Playtime’s over. Let’s find out what the Church actually teaches.”

As you may imagine, it is hundreds of pages long, and dense. You’re not going to finish reading it over a few nights. Still, it’s a fantastic reference to have available.

In the preface, Ott says that his “aim was to present the essentials of Church teaching and the foundation of such teaching in clear and concise form.” Judging by its reception among orthodox Catholic theologians, he seems to have succeeded admirably.

In some ways, Ott’s presentation is much easier, more accessible, and more digestible than Denzinger. It is organized according to subject rather than by chronology, and provides a wealth of useful commentary. The typical formula goes as follows. The dogmatic teaching is clearly stated in bold. It follows with where this dogma is defined, and then provides Scriptural references, conciliar references, papal statements, and writings of the fathers and doctors of the Church that pertain to the teaching. Ott then provides his own commentary. From the book:

Further, God’s love for creatures is a benevolent love (amor benevolentiae), that is, God loves creatures not with a receiving, but with a bestowing, and therefore a most unselfish love. (p. 45)

So there you go. The Catechism, Denzinger, and Ott.

Many theologians of the highest regard refer to them often, and the layman may benefit from their reference as well.

Of course, the added benefit of familiarizing oneself with dogmatic statements is that you begin to recognize what is dogmatic and what is not — which sometimes proves to be a helpful skill indeed.