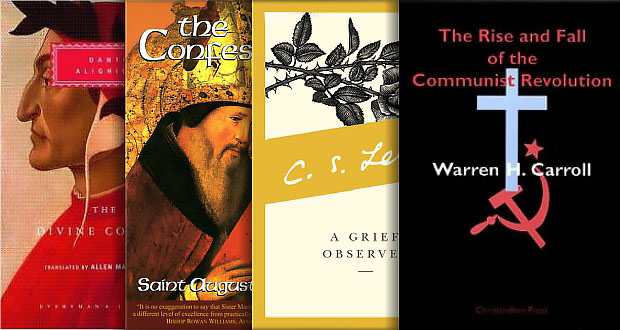 As I was recently helping my son Athanasius order and assemble his books for his first year at Christendom College, I began thinking back to the books that have changed my life. It’s a happy memory, because I grew up in a family of readers, and we all lived in a library of sorts.

My mother, who holds a master’s degree in Library Science, not only owned hundreds of books, but also had them cataloged on the shelves of our home. My father, an accomplished carpenter, always seemed to be building “one more bookcase” to meet the literary demands of his wife. For all the things that our large Catholic family did not have, we had a treasury of books. My mother’s consummate genius in homeschooling pedagogy reached its zenith with a simple rule for her children: you can stay up as late as you want as long as you are reading.

Hence, we all read.

We all respected—we all loved—the printed word.

During those years, I learned an important lesson. There are books that remain with you forever and help you determine both who you are, and who you want to be.

Since I’m going through this period of nostalgia, it seems appropriate to share a list of those books that changed my life. Putting together a list like this is tough. For one thing, it does a disservice to some other books. Plus, it invites criticism, as in: “How could John Clark have left out X?” Please keep in mind, this is not an exhaustive list. It’s also isn’t necessarily my list of favorite books. My favorite Shakespeare play, The Merchant of Venice, does not appear on this list. It’s a great work of literature, but I don’t think it changed my life. I also left out the terribly obvious books, such as the books of Sacred Writ.

I could have devoted the list to works of theology, but this is an eclectic mix, containing both fiction and non-fiction, Christian and non-Christian writers, and contemporary and ancient works.

Perhaps this list will spur a discussion in your family as to ten books that changed your life.

‘The Divine Comedy’ by Dante

Friends still marvel about how diligently I chased my future wife, Lisa, when we were in college. Dante inspired me.

Dante’s tale of going through Hell to be with the woman he loves in Heaven is the stuff of rapture and romance, of theological precision and literary perfection. I read it over twenty years ago, and still think about it frequently. If you have never read Dante, drop everything you’re doing and get a copy.

And “She, where is she?” instantly I said;
Whence he: “To put an end to thy desire,
Me Beatrice hath sent from mine own place.
And if thou lookest up to the third round
Of the first rank, again shalt thou behold her
Upon the throne her merits have assigned her.”
Without reply I lifted up mine eyes,
And saw her, as she made herself a crown
Reflecting from herself the eternal rays.
(Paradiso, Canto 31)

One of the most gifted writers of any age, St. Augustine’s autobiography gives hope to the sinner. The initial attractiveness of sin, followed by the remorse and hatred of wickedness, is examined in detail. There are many moments of poignancy, including the tenderness with which he refers to his mother, Saint Monica, along with stories of his boyhood friends. For me, his philosophy of friendship was very moving. In one of my favorite passages, Augustine laments losing a close friend:

At this sorrow my heart was utterly darkened, and whatever I looked upon was death. My native country was a torture to me, and my father’s house a wondrous unhappiness; and whatsoever I had participated in with him, wanting him, turned into a frightful torture. My eyes sought him everywhere, but he was not granted them; and I  hated all places because he was not in them…

‘A Grief Observed’ by C.S. Lewis

Frankly, just about anything I ever read by Lewis could appear on this list. (For me, the world of Narnia impressed me far more than the middle-earth envisioned by his contemporary, Tolkien, with whom Lewis is often compared.) A Grief Observed is a lesser-read work dealing with the loss of Lewis’ wife and how it affected his own relationship with God. This book is hard to read for all the right reasons. It has certainly developed in me a deeper sense of compassion toward my acquaintances who have a lost a loved one, and a greater appreciation for time spent with my own family.

Sorrow, however, turns out to be not a state but a process. It needs not a map but a history, and if I don’t stop writing that history at some quite arbitrary point, there’s no reason why I should ever stop. There is something new to be chronicled every day. Grief is like a long valley, a winding valley where any bend may reveal a totally new landscape.

‘The Rise and Fall of the Communist Revolution’ by Warren Carroll

Warren Carroll viewed history as St. Augustine did: history is the struggle of those who love God versus those who hate Him. Perhaps this was most evident in the rise and fall of communism, and never explained more powerfully than in this text. It is a book of the worlds greatest heroes and villains. I’m not ashamed to say that I had nightmares while reading this book.

I was lucky enough to have the late Dr. Carroll as a professor at Christendom College; that fact certainly contributed to the book’s impression on me. But, for those who never met him, this book is a revealing look at the person of Warren Carroll; his personality is embedded in every page.

One more item regarding Warren Carroll’s books that is rarely mentioned. He is one of the best pure writers I have ever read. In fact, I have adopted many of his techniques and styles in my own compositions. This book not only deepened my resolve as a conservative; it made me a better writer.

Consider the following quote, in which Carroll details Pol Pot’s takeover in Cambodia.

Imagination quails before the horrors of that march. Hospitals were emptied, some patients being pushed into the choked streets on beds with needles still in their arms. But most of them had no beds; if they could not walk, they crawled, like worms. The roads could not begin to hold all the expelled. People were pushed together in vast clumps like seaweed in the Sargasso Sea, so densely packed that they could move only a few hundred yards an hour. The soldiers shot any one who lagged—and any they felt like shooting. The very small children, the old, the sick soon began to fall. They died where they lay, and the driven hordes trampled their corpses.

Communism had come to Cambodia.

Your turn:  Have you read these books? Got a favorite quote from them? What are your top three books that impacted/impressed you?
alighieri augustine carrol clark comedy communism confessions dante divine fall grief john lewis observed rise saint st the father's role tolkien warren 2013-09-14
John Clark