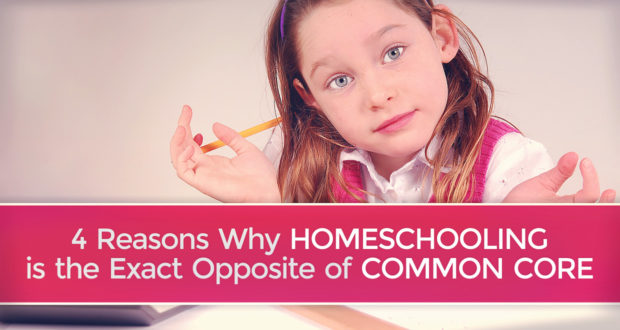 4 Reasons Why Homeschooling is the Exact Opposite of Common Core

I had the misfortune lately of researching the topic of Common Core learning.  Though I would have rather been attempting to repair my weed-whacker for the nineteenth time or cleaning out my septic tank, I knew that I had to delve into this topic, like it or not.

And the more I researched, the more I realized something: homeschooling is the exact opposite of common core learning.  Here are just a few observations to illustrate my point.

1) Common core is about testing.  Homeschooling is about learning.

From the first day of school to the last, common core academics focuses on “teaching to the test.”  Teachers know this and must focus on tests, rather than on their favorite teaching methods.

By the way, this is not a criticism of teachers by any means.  Common core is unfair to students, but it might be more unfair to teachers.  In fact, understandably unwilling to teach using common core methodology, an increasing number of teachers are simply leaving the profession.

Heartbreaking letters abound from teachers who are forced to leave their field because of these changes.  One such letter observes:

“…“data driven” education seeks only conformity, standardization, testing and a zombie-like adherence to the shallow and generic Common Core…

After writing all of this I realize that I am not leaving my profession, in truth, it has left me. It no longer exists.” (My Profession No Longer Exists)

Contrast this with homeschooling, which allows parents to continually adopt methods that prove successful for teaching each individual student, and it allows them to learn.

Most of the crucial decisions for the common core curriculum are made at the federal level.  They are made by panels often composed of bureaucrats who, among other things, seem hell bent on expanding sex-education into a thirteen-year (K-12) course.

3) With common core, creativity is snuffed out in favor of egalitarianism. Homeschooling allows the highest levels of creativity.

In many ways, common core is constitutionally opposed to independent thinking.  (It’s also constitutionally opposed to The Constitution, but that’s another matter.)  It specifically disallows creativity.  Much like Keynesianism did to the financial world, stifling the creativity that supply-side economics would have fostered, common core does the same disservice to academic creativity.  As the ability of parents to avoid common core diminishes every day, it is becoming less demand-side education than it is command-side education.  Yet, we are constantly told how great it is.

One website claims: “It’s a Common Core Revolution — Ensure complete coverage”.(Why On-Core Mathematics) It’s as though Common Core is a sunscreen, protecting all from the carcinogenic rays of competing pedagogic methods.  No thanks.  I need the vitamin D that homeschooling allows.  By contrast, one could cite many studies that show how homeschooling produces natural leaders and entrepreneurs.

What about common core: does it encourage parental involvement?  Many say “no,” and with good reason.  As one author recently observed:

“Since most parents don’t understand the Common Core techniques, students are becoming more dependent on their schools and teachers for their education, and less on help from their parents. This is like a dream come true for progressives who hope to continue to minimize the role of parents in the lives of their children.” (Beck, Glenn (2014-05-06). Conform: Exposing the Truth About Common Core and Public Education (Kindle Locations 1330-1333). Threshold Editions. Kindle Edition.)

“There can be no greater stretch of arbitrary power than is required to seize children from their parents, teach them whatever the authorities decree they should be taught, and expropriate from the parents the funds to pay for the procedure.” (Paterson, Isabel. God of the Machine. Transaction Publishers. 1993, page 255)