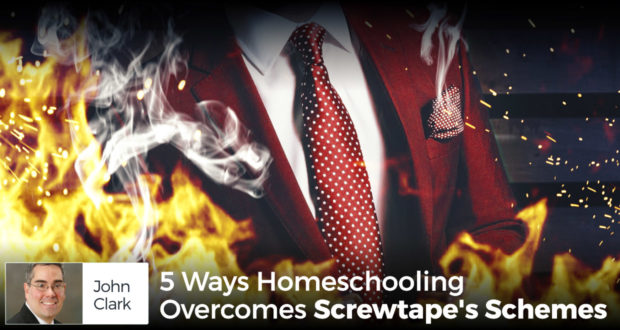 In his classic book, The Screwtape Letters, C.S. Lewis envisions what the tactics of the devils might be in their efforts to lead men to Hell.

To make his point, the Letters are the fictional correspondence from a master devil to his nephew, a devil apprentice.

As I re-read it recently, it struck me that the book provides an apologetic for homeschooling, and how homeschooling is a powerful response to many of these demonic tactics. Below are several of the quotes that caught my eye.

“It is funny how mortals always picture us as putting things into their minds: in reality our best work is done by keeping things out.”

The problem with non-Catholic education is often not only what is taught, but what isn’t taught. The primary truths of Catholicism are largely disallowed in most primary schools.

That doesn’t mean that the family is not involved in the child’s school; the family is often more involved than they know. In a sense, wherever a child goes to school, the rest of his family goes there, too.

From the workbooks the children bring home to the social mores of a child’s peers that find their way into his discussions with his siblings and parents, school influences the whole family.

“Jargon, not argument, is your best ally in keeping him from the Church.”

Lewis observes that argument—even that ever-popular American-style of argument that stinks of informal fallacies—might cause one to think. Therefore, rather than appeal to argument or to principle, political slogans—free of logic—are introduced.

The terms “war on women,” “abortion rights,” and “love wins” come to mind.

In my thirty-five years of being around homeschooling, it is clear that homeschoolers are taught principles, not jargon. They are taught to argue, not to deride. They are taught logic, not fallacies. (In my house, I read sections from liberal newspapers and we all play a game of “Name That Fallacy.” Bonus points if you can find three fallacies in a single sentence.)

Homeschool children are taught not only to diagram sentences, but to diagram thought—a fact noticed by college faculty members and employers nationwide.

And for apologetics to have much success at all—indeed, for us to be able to rationally defend our own beliefs—we need to be people who can think.

At Home in Earth

“Prosperity knits a man to the World. He feels that he is ‘finding his place in it’, while really it is finding its place in him. His increasing reputation, his widening circle of acquaintances, his sense of importance, the growing pressure of absorbing and agreeable work, build up in him a sense of being really at home in earth, which is just what we want.”

The devils in hell must enjoy the “work first, family second (if at all)” ethic that has overtaken the Western world.

Isn’t it time we fathers stopped pathetically scraping, groveling, and desperately begging for approval from a world gone mad?

Simply put, a father’s home should be… home.

“The best thing, where it is possible, is to keep the patient from the serious intention of praying altogether.”

The homeschooling life allows prayer to be at the center of the student’s (and the family’s) life.

The morning offering, grace at lunch, divine mercy prayers in the afternoon, and Rosary in the evening are pretty common for the average Catholic homeschool family.

In fact, you could say that a prayer life is the “common core” of Catholic homeschooling.

“Keep everything hazy in his mind now, and you will have all eternity wherein to amuse yourself by producing in him the peculiar kind of clarity which Hell affords.”

Hell has its own doctrine. It’s called “radical skepticism” and it’s everywhere around us. It proposes that there is no natural law, no set of moral principles, no way of distinguishing “right” from “wrong,” no way of knowing when life begins, and no way of knowing whether it matters that it begins.

In diametric contrast, Catholic homeschoolers learn what Hell fears most: the clarity of truth.

There’s single no cure-all to the temptations that we face in this life.

Yet it’s worth pondering that Catholic homeschooling can help create a loving and supportive environment that celebrates virtue, and keeps all of us—parents and children alike—focused on God.