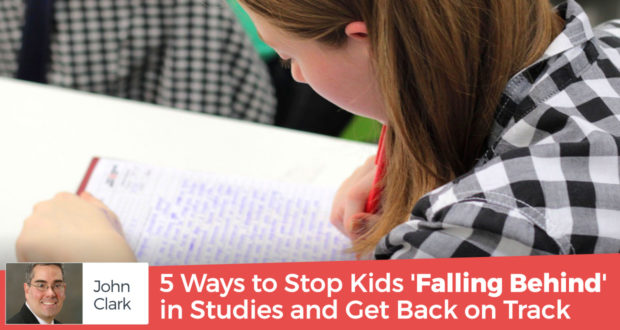 Homeschool dad John Clark explains that catching up is a process, not an event. Sometimes taking time to explain the concepts makes a big difference.

One of the thoughts that plague homeschool parents is that their children are “falling behind” in their studies. The constant activity that we parents undertake doesn’t seem to alleviate our concerns. Something I recently saw reminded me of this.

In the 1960’s, there was a comedian on The Ed Sullivan Show who tried to get five or six plates spinning on poles. The trick was to get all the plates spinning at the same time.

He would get most of them spinning and then one would fall, and he would have to start over, again and again, until he accomplished his task.

Falling Behind Happens to Everyone

Home schooling is a lot like spinning plates. Your five-year old daughter needs help with Phonics, so you spend a few minutes showing her how to do her workbook pages. Next, your sixteen-year-old son needs to order some new software for music composition class, so you order it and start downloading the software.

Your fourteen-year-old daughter misplaced her history book, so you spend a few minutes looking for it in the car, in the truck, and in the pantry. While you’re searching for the book, your five-year-old calls for you and asks why you’re not helping her with her Phonics.

Home schooling is not a well-oiled machine.

Console yourself with the fact that no human endeavors are flawless. Also, don’t kid yourself that things are going swimmingly at the local Catholic school. They aren’t. They have their problems, too.

“Falling behind” is not the exclusive domain of home schooled students.

Public and private schooled children fall behind, too. There are snow days, parent-teacher conference days, disruptive classmates, and so forth. In addition, every case study I have ever read about how time is spent in schools documents that a vast amount of time is wasted every day.

If you home school long enough, there will be times when you feel you have not accomplished as much as you intended, so I have included a few strategies to get back on track.

Have a parent-teacher conference.

Known more commonly as a “date,” here’s how a parent-teacher conference can work in your family. Take your wife out for a good dinner.

Why at a restaurant? Because if you ask your wife “How ’s the homeschooling going?” after a long day with the children, your question seems offhand, and you will probably get an offhand answer.

However, if you hire a babysitter and have a date with the intention of finding out how the homeschooling is going, it shows concern.

It doesn’t have to be elegant, but if the restaurant provides you with plastic-ware in a cellophane baggie and contains a single utensil that looks like the cross between a fork and a spoon, you’re in the wrong place.

Until dessert, spend the time at dinner discussing the homeschool situation. Take a legal pad and devote a page to each child. Have your wife provide you with an update of each child: strengths, weaknesses, and academic interests.

At this conference, the two of you can assess where each child is, and determine how to help them with each subject. This discussion will be much smoother than having the same talk after a hard day of homeschooling.

If your son is behind in Algebra, take some time to work on that together. When I was learning Algebra, I hated it until I understood it. I couldn’t figure out what sadistic mind it took to come up with the idea of using letters to represent numbers.

I remember being confronted with problems such as: “If Billy left Detroit at 8 p.m. traveling 40 MPH, and Joe left Minneapolis at 10 p.m. traveling at 80 MPH, what time would they meet?”

I had a far deeper philosophical question: “Who cares?”

Then, one day, a flash of genius occurred—I got it. I attribute it to actual grace, but it also may have been the night my dad sat down with me and explained some algebraic concepts to me.

Today, as an adult, I like math. I read books about theoretical mathematics. My brother visited me a few nights ago, and after dinner, we spent an hour arguing about a mathematical theory. We broke out a pen and paper and were arguing with each other with equations.

If your son is behind in algebra, he probably feels the same way I did. Consider ordering some new math software or videos to help him understand the concepts. Spend two nights a week and a few hours on Saturdays to explain the concepts to him.

Work out the problems together. It’s all right if you are not very good at algebra yourself. You can learn it together.

Your son may be inspired that you have taken the time to learn something for his sake.

Establish Goals and Celebrate Them.

Incentives are important for all areas of life. I’m not sure, but I think that’s why they provide donuts after Mass.

Let your daughter know that if she meets the goal for her history term paper, you will take her to a movie. Celebrate accomplishment.

Whatever your system for getting caught up academically, remember that getting catching up by Tuesday is probably not realistic, but catching up in the next 90 days is more realistic.

Catching up is a process, not an event. Also remember that you can get back on track. Recommit yourself to your goals.

You will get there.