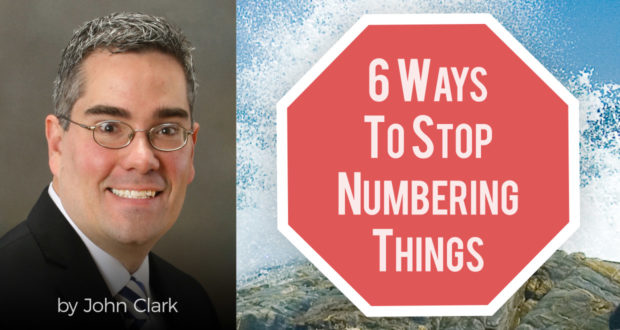 As I look back on my columns, I realize that I have been numbering things too much. In order to address this problem, I have created a self-help list.

Feel free to use it yourself.

1. Admit to yourself that some things cannot be quantified.

One by one, we love to number things. But admit to yourself that, nine times out of ten, life’s activities cannot be expressed numerically.

2. Pick out 10 things that you are numbering right now, and stop!

Make a list of ten things to stop numbering, and look at it every 24 hours. If you get stuck in the middle of making your list, take a ten or fifteen minute break and come back to it.

Don’t insist on perfection—it’s hard to bat a thousand when doing this kind of thing.

When I was home schooling at age fourteen, I usually organized my 6 hour day to include math class between Spelling 8 and English 9. I studied hard because I wanted to get a good nine-to-five job after twelfth grade.

Starting at about 1:30PM, five days a week, I studied a book called Saxon Algebra ½. After eighteen weeks (or one-half a traditional 36-week school year), studying the book felt like a Catch-22.

Even though it took me twice as long as usual to complete, ever since finishing 100% of that book, I have only felt half-done.

Putting two and two together, and worried that this book served as a reminder that my life was only a fraction of what it could be, I’d lie awake nights thinking about it, so I had to count sheep before I could catch forty winks.

Quick question, Mr. Saxon: Where’s the other half?

It’s become part of our physiological lexicon to say things like: “I’m not feeling one hundred percent right now.” From now on, if someone asks how you are doing, try to respond by saying: “I am feeling less than perfect, thank you!”

See what I mean?

If you give 110 per cent, you can explain how you’re feeling without using numbers at all. And while we’re on the subject, who the heck feels 100% all the time, anyway? Three or four days a week, I’m on cloud nine if I feel 80%.

5. For the next 5 columns or blogs you see with a number in the title, refuse to read them.

Do this ½ out of principle and ½ out of the desire to spend an extra fifteen or twenty minutes with two or three members of your family.

When you get to the 6th column, only spend 2/3 of the time you would normally spend reading it. After about 30 days, you will have cut your reading time by 33%.

After a recent 3 o’clock wedding that Lisa and I were ten minutes late for, our eleven-year-old daughter requested we pick up some ice cream. So there stood the two of us—dressed to the nines—looking for half-gallons of ice cream in aisle twelve. I discovered that some ice-creams have half the sugar and some have one-third of the calories of the regular versions.

But I spent two or three minutes thinking about a more important question, namely: is it me, or is a half-gallon of ice cream no longer as filling as it once was? This is a trick question, dear reader, because as it turns out, you can’t even buy a half-gallon of ice-cream any more. You can buy 1.75 quarts. (Is nothing sacred? Who decimalizes ice cream?)

This makes calorie-counting maddening. On the back label, it tells you how many calories are in 8 ounces, but 1.75 quarts isn’t divisible into eight-ounce increments.

I have half a mind to think this is a conspiracy.