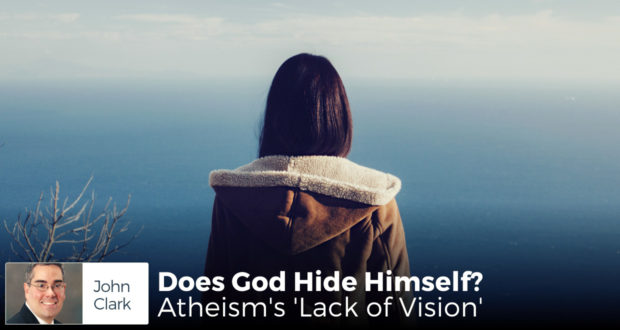 Does God Hide Himself? Atheism’s ‘Lack of Vision’

Celebrity atheists such as Richard Dawkins like to say that if they ever met God, they would ask God why He tried so hard to conceal Himself.

This has become a popular question in atheist circles; so popular, in fact, that it has even radiated into Christian circles, prompting some to wonder: Why does God make Himself so difficult to see? Wouldn’t this life be easier if we could see Him? Wouldn’t we stand a greater chance of salvation if God at least revealed Himself more fully to us?

Implicit in these questions, at least from a Christian perspective, is that the more confident people are about God’s existence, the more likely they are to embrace Him. But is that the case?

Consider this. It is often speculated that one-third of the angels fell with Lucifer, and there wasn’t a single atheist in the lot. Though these angels did not yet enjoy the Beatific Vision, they all knew quite well that God existed.

Their difficulty was not determining whether God existed; their trouble was that they could not bear the thought of serving God. Lucifer did not say “non fidem” (“I do not believe”), he objected: “non serviam” (“I will not serve”).

More to the point, these angels fell because they could not tolerate the thought that they were not God.

Modern man seems to have similar problems. Nietzsche, one of the most lauded thinkers of our time, encountered similar Luciferian thoughts. In fact, Nietzsche did Lucifer one better, as he attempted to bridge the gap between “non serviam” and “non fidem.”

In his dizzied and dizzying Thus Spoke Zarathustra, Nietzsche writes: “But let me reveal my heart to you entirely, my friends: if there were gods, how could I endure not to be a god? Hence, there are no gods.”

Whatever you think of Nietzsche’s “proof” of atheism (and, by the way, it’s not the worst one I’ve heard, which says a lot about the rest), it’s remarkably honest in some ways. As he illustrates, the problem for some men is not that God is difficult to see. The problem is that some men have a difficulty seeing that they are not God.  The problem often lies in the will.

Whenever you hear an argument like, “There can’t be a God, because if there were, things would be a lot better than this,” you’re hearing echoes of Nietzsche that were once uttered in the chambers of his insane asylum, but now reverberate into corridors of the 21st century. What they are often saying is: “If I were God, things would be better than this!”

If God has taken pains to conceal Himself, what of Lourdes, Fatima, motion, causation, the double helix, Guadalupe, order, love, the Shroud of Turin, design, Lanciano, the incorruptibles, matter, non-matter, and conscience, or a myriad of other phenomena?

The Catholic moral response to both natural and supernatural revelation is simple: Catholic moral theology attempts to outline an ethical code based on Who God Is.

But modern man is tempted to invert the process. As some ardent disciples of Nietzsche might put it: God does not endorse my sin; hence, there is no God.

If learning about God includes a pedagogy of ethics, it follows that some insistently unethical men would want to know less—not more—about God. And this desire often causes them to disregard the pursuits that lead to the knowledge of a Creator.

The intellectual lifeboat of atheism must eventually jettison metaphysics, philosophy, and logic. All the while, it must deny many evidences that are so clear to see.

Quote from The Portable Nietzsche. p. 198.