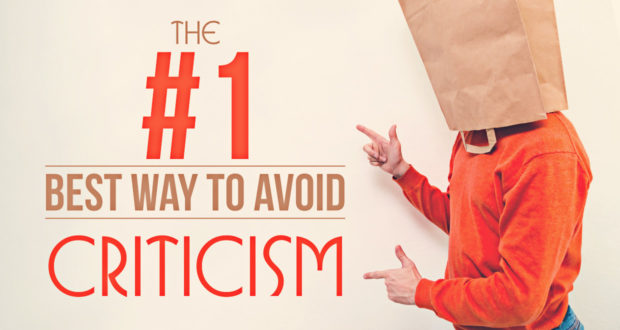 The #1 Best Way to Avoid Criticism

There is a saying that has been attributed to Aristotle, but like many such quotes, no one seems to know who first said it. The saying is: “If you want to avoid criticism: do nothing, say nothing, be nothing.”

Whoever said it, it goes hand in hand with a quote that is attributed to Edmund Burke, but again, we don’t know who first said that either. That quote is: “All that is necessary for evil to triumph is for good men to do nothing.”

Good men can be tempted to think that doing good just isn’t worth the inevitable critique. It is a fact of life that any and every attempt in life opens you to criticism. What’s disastrous is this: the noblest of attempts open you, not to the least criticism, but to the most.

This tends to be true in homeschooling. Criticisms abound:

“Martha’s children are behind in Math. Maybe she should have thought of that before she pulled her kids out of school.”

“His daughter went off the deep end. Homeschooling didn’t help that girl any. Big mistake.”

I’ve never done a formal survey, but anecdotally, I can guess that Moms and Dads sometimes think: “If we simply stop homeschooling, at least we won’t be criticized for the education of our kids any more. Someone else will.”

When you shift responsibility, you shift criticism. The world may be lacking a lot of things, but criticism isn’t one of them. If we honestly assess our own lives, many of us would have to admit that, at times, we have refused to do good because we thought we might be criticized for it. I know I have. This is sad, but there is something we can do about it.

Obviously, there are times when we must speak up against others; there are times when we need to stand up for our faith. The kind of criticism I am speaking of here regards personal relationships, and in my experience, criticizing is rarely done for the sake of actually helping someone. We often do it to make ourselves feel better at the time, although we tend to feel badly about it later.

Overall, it tends to help absolutely nobody. If someone is doing something that you believe warrants criticism, try this instead: say one Hail Mary for them. I am positive that this prayer will help them… and yourself. It might not happen right away, but it will happen.

Somehow along the line, some of us Catholics have come to believe that we should be very critical of ourselves. Sometimes we act as though Jesus said “Love your neighbor, not yourself” instead of “Love your neighbor as yourself.” Of course, we should always be trying to better ourselves, but we have to understand that this is usually a gradual process.

Some of us seem willing to give everybody a break except ourselves. Is that what God wants from us? Our self-criticism can often prevent us from doing good. Confess your sins and move along with your life. Let yourself off the hook.

Take it from me (or pseudo-Clark, as I may come to be known): all that may be necessary for more good to triumph is for us to stop the criticisms.