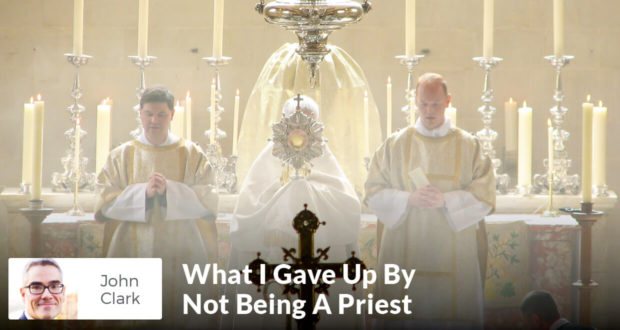 What I Gave Up By Not Being A Priest

John Clark turns the too-often used counsel for young men upside down with this advice to his sons: ‘Think of what you will give up by not being a Priest’.

Like many Catholic fathers, I often pray that if my boys have vocations to the priesthood, they accept their callings.  Sadly, as Jesus told us, many do not.  The corollary to my prayer is the additional plea that I be given the graces to properly assist them along their way.

There are some obvious ways to do that: talk about my (very imperfect) love of God, pray with them, and take them to liturgy and the sacraments.  But I also believe that part of that grace is the ability to explain the priesthood in a positive and encouraging light.  Historically, we fathers might not be too good at this.

Given the dearth of seminarians in America, I wonder if we fathers are presenting the priesthood to our children in the right way.  I’m guessing that, far too often, we begin with talking about the perceived negatives of the priesthood.  Specifically, we may not be doing justice to the vocation by starting with saying that, as a priest, “you are giving a lot up.”

This has become a Catholic cliché.  “You’re thinking about becoming a priest, Billy?  Sounds great, but just remember, you’re giving a lot up to become a priest!”

My sixteen-year-old son Demetrius and I were talking about this recently.  And I explained to him that every commitment involves giving up something else. Even on a natural level, things like becoming a good basketball player require the time and effort of practice.  Shooting one-hundred free throws means giving up something that might be more fun.  But if you hadn’t given those things up, you wouldn’t end up hearing too many cheering crowds.

I explained to Demetrius that when his mom and I were married, we both gave things up, too.  We were giving up regular sleep (although we didn’t quite understand how much at the time).

We were giving up many freedoms.  For instance, once you have children, your freedom of travel is quite restricted.  You can no longer hop in a car and drive to Atlantic City for the weekend.  You are also giving up a lot of time you used to spend with your friends—time that is now devoted to your family.

You are giving up the financial rewards known largely to the single life.  Had I never gotten married, for instance, I could easily have afforded to travel the world and drive a Mercedes.  But, as I explained to Demetrius, his mom and I don’t sit around and wonder what it would have been like if we had never surrendered those freedoms.

We believed that we were receiving something better in return: the unique form of friendship that is found only in marriage, the cooperation with God to create life, and the love and happiness of children.  And that is what we received.

We call that fulfillment.

I would conclude that, for their own states of life, priests have that feeling of fulfillment, too.  I am not a priest, so I can’t speak as though I am.  But I can speak as a man who seems to be gaining an increasing understanding of what it’s like not to be a priest.

I’ll never know the joy of forgiving the sins of the penitent.

I’ll never know what it is like to regularly bring babies into the state of sanctifying grace in Baptism.

I’ll never know the unique intimacy with God that is accomplished in confecting the Eucharist.

I’ll never know what it is like to comfort one in death with the Sacrament of Anointing of the Sick.

I’ll never know the happiness of helping husbands and wives unite in love before God in a wedding ceremony.