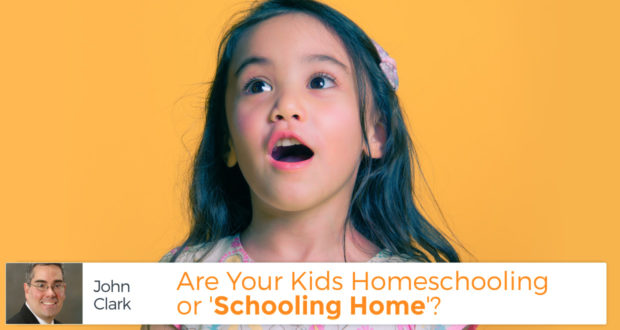 Are Your Kids Homeschooling or ‘Schooling Home’?

A few days ago, I came home from the gym and noticed that my twenty-two-year-old son Athanasius was having a conversation with my twelve-year-old daughter Dominica at the breakfast table.

As I cooked my eggs, I overheard some of the conversation and realized that he was teaching her about metaphysics—specifically about the Four Causes.

As he taught her about causality, using the example of a drinking glass, Dominica seemed to grasp the concepts pretty well; after all, no one told Dominica that this was a difficult subject to understand.

No one told her that was an atypical conversation between brothers and sisters in America, regardless of their age. She didn’t know she was learning metaphysics—she was just having a conversation with her brother.

Athanasius, who is rarely happier than when he has a philosophy book in one hand and a cup of coffee in the other, didn’t find this conversation particularly noteworthy, either. He loves to talk about what he is learning.

Though our children read Aristotle and St. Thomas Aquinas in their high school years, Athan’s philosophy classes at Christendom sparked an even greater desire to know, and that, as Frost put it, “has made all the difference.”

As Athan explained to all of us the contemporary confusion about the notion of final causality, something else became clear to me. Eventually, especially if you are a close family, if one of your children goes to school there, they all go there.

Wherever your children go to school, you parents go there, too.

Eventually—and often, almost immediately—the ideas that a child learns in school are communicated to the other children, and to the parents. This can be a wonderful thing, whether it’s kindergarten, fourth grade, or college.

“Tell me what you learned today” is probably—and hopefully—one of the best parent-child conversation starters of them all.

In the little homeschooling world that Lisa and I have fostered, this is our normal, everyday conversation. The beauty of it is that we already know what our children learned because, in many cases, we learned it too; or at least we learned more about it.

For their part, as someone once put it, the children “learned how to learn.” And—if Saturday’s breakfast was any indication—they learned how to teach.

We learn together, with a pedagogical style in which each subject is Catholicized. This is a rule in our house. We don’t drink decaf coffee, we never leave a game or practice without thanking our coaches, and we Catholicize everything. Our children’s school, homeschool, is where we all go; and that’s a pretty wonderful thing.

Of course, not everyone has the luxury of this experience. Across the Western world, the most frequent pedagogical style is one in which Catholicism is a strange and foreign notion which is eagerly and gleefully deported. In fact, there seems to be an intense desire to redefine or simply muzzle what was once viewed as the moral nomenclature of the West.

It’s worth noting that C. S. Lewis saw this coming three-quarters of a century ago. Speaking of some textbook writers in his book, The Abolition of Man, Lewis speculated about their goal: “They may be intending to make a clean sweep of traditional values and start with a new set” (13).

Some may have doubted Lewis’ words in 1943. Does anyone doubt his words today?

There are good schools. There are good textbooks. But there are also schools and textbooks that stand in philosophical opposition to those truths and beliefs that you hold most dearly. Examples abound.

The blackboard often begins as a window that allows the students to peer into atheism, socialism, and modernism, and gradually becomes a mirror that reflects back what has been taught for twelve years.

Of course, the parent can object to his child learning the “wrong things.” He can sit his child down and say, “Listen Billy, I know that you have spent the last three months reading Friedrich Nietzsche and Karl Marx. But it’s important that you understand that they’re wrong. I know that your teacher adores Richard Dawkins. But with apologies to Mr. Dawkins, he misunderstands all five of Aquinas’ arguments.”

Yes, you can say all this to Billy. But if a parent winds up rejecting the ideas that a child is learning in school, that prompts a fairly obvious question, like: “Why are you sending me to a school where I am learning so many things with which you fundamentally disagree?”

I’m not sure how you answer Billy.

Whether or not their names ever appear on the roster, all the children in the family go to Billy’s school. And so do the parents.

In this scenario, Billy is not homeschooling. Billy is schooling home.

It is beyond my authority to tell parents what to do about the education of their own children. But we should at least be willing to recognize the massive influence of school—whatever type of school that may be—on our children. And on everyone else.