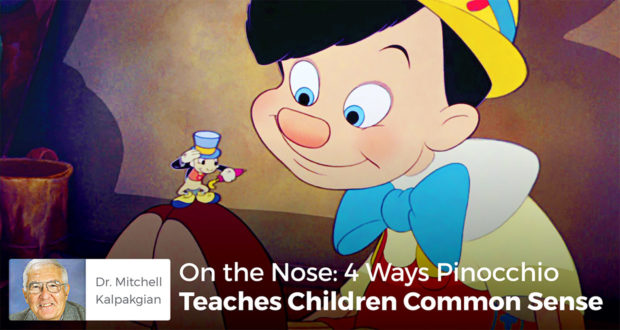 In a world needing more common sense, Mitchell Kalpakgian finds priceless lessons in Pinocchio to teach our children how to live virtuous and rewarding lives.

While all human beings inherit a rational human nature and the power of intelligence to govern their lives, many live without using their ability to think.

Although all persons possess common sense, this virtue is more rare than common.

Why is common sense not as universal or prevalent as it ought to be when all men have minds capable of seeing the truth and recognizing the difference between sense and nonsense?

All cultures have proverbs passed down through the generations which summarize the basic lessons of common sense. In Carlo Collodi’s Pinocchio, a primer of common sense for both children and adults, Gepetto and the wise cricket persist in educating Pinocchio in this perennial wisdom with proverbs like “Hunger is the best cook,” “Children who do not follow the advice of those who are wiser than they are, always come to grief,” “Idleness is a dreadful disease, of which one should be cured immediately in childhood; if not, one never gets over it,” “Beware of evil companions,”

“We should treat everyone kindly as far as is possible, that we ourselves may be treated kindly when we need it.” With regard to common sense, no one can plead invincible ignorance because of the storehouse of the world’s wisdom.

First, common sense thinks ahead, foresees consequences, and makes preparations for the future. No one goes into a grocery store to make purchases without a supply of money, yet many students enter a classroom without books, pencil, paper, a receptive state of mind, or the completion of homework.

Common sense dictates that people purchase the necessary items first and buy accessories or luxuries only if the budget allows, yet adults live in a state of perpetual credit-card debt that never diminishes, because of spending habits that lack good judgment.

Pinocchio goes to school but does not study; he associates with bad companions, like the Fox and the Cat, who cheat him of his money, and with Lampwick, who tempts Pinocchio to leave behind books, masters, and lessons and travel to Playland, where every day is a Saturday to be spent in amusements until he turns into a donkey.

Common sense always thinks of tomorrow and does not live only for the pleasure of the moment—as Pinocchio does, to his great regret.

To refuse to eat leftovers or to be guilty of fussiness breeds habits that violate all sense of economy. When Pinocchio complains of hunger but refuses to eat the pears unless they are peeled, or bites into a pear and throws it away, his father insists on frugality: “I never thought, my lad, that you were so refined and fastidious. That’s too bad!

We should get used from childhood to eating everything, and liking it.” In addition to food, Pinocchio also wastes his father’s money. When poor Gepetto sells his winter coat to buy Pinocchio an expensive book he needs for school, Pinocchio re-sells the book to see the marionettes, while his father “stayed at home shivering in his shirt sleeves.”

Common sense appreciates the value of all good things and remembers the debts of gratitude.

Common sense also is mindful of the value of time, and makes proper use of it, realizing the dangers of idleness, sloth, and the pursuit of pleasure at the expense of duty.

Pinocchio hears a number of times that he must learn a trade and learn an honest livelihood: “To earn money, you must know how to do it with the labour of your hands, or with your brains.” Begging is dishonorable and shameful, permissible only for the crippled and aged.

As Pinocchio wastes the food on the table, his father’s hard-earned savings, his valuable time for learning, and his natural talents, a squirrel reprimands Pinocchio for this careless way of life:

“For it is written in the decrees above that lazy children who dislike books, and masters, and who spend their time with toys, games, and amusements, must end up, sooner or later, by becoming little donkeys.”

The Cricket counsels Pinocchio, “Remember that children who do as they please and want to have their own way are sorry for it sooner or later.”

Third, common sense always gives priority to health and well-being, and does not take foolish risks that threaten a person’s welfare.

To overeat or to be undernourished, to indulge in pleasures harmful to the body or the soul, to live in a constant state of stress from overwork or over activity, or to invent excuses for avoiding regular exercise or neglecting the basic care of the body all lead to a multitude of problems.

As Pinocchio’s life shows, every violation of common sense brings foolish risks to life and limb. Pinocchio’s reckless idea of adventure finds him pegged on a nail, thrown into a doghouse, tied to a tree, ensnared in a trap, locked in jail, captured in a net, and apprehended by a policeman.

Threatened by the Assassins who demand Pinocchio’s money, the boy is tied to a tree as he hears the dreaded words, “Let us hang him!” Pinocchio more than once imagines it is his last hour as the Assassins flash their knives: “The puppet, feeling that the end was near, began to tremble, so violently that the joints of his wooden legs creaked…” Another time, he was nearly fried as a rare fish. Common sense always means self-defense against enemies notorious for the harm they pose to mind and body.

Fourth, common sense listens to the advice of the wise and elderly and does not continually repeat the same mistakes.

It does not mistake liberty for freedom or obedience for slavery. All people, not just children, can learn from the past and change the course of their life rather than always being fooled, making imprudent decisions, wasting opportunities, and imagining there are no consequences for negligence and sloth.

In the name of independence from authority to do as he wishes, Pinocchio is always losing his freedom by his disobedience to his father, and by his rejection of the common sense taught to him by the Fairy and the Cricket.

He is constantly dominated or enslaved by some master, tyrant, or fierce animal and eventually finds himself in the belly of a shark. Adults too cannot live their lives mindless of universal knowledge, the moral truths enshrined in proverbial wisdom and religion, and the self-evident truths of common sense that never fail to speak as clearly as Gepetto does to his son.

There is no such thing as absolute freedom, only the freedom to do what is wise, moral, and sensible.

The modern world lacks this proverbial wisdom that Gepetto handed down to Pinocchio.

A government that is trillions of dollars in debt, a society that has become a welfare state, public school budgets that lack all sense of economy, many graduates of high schools and colleges ruled by sloth and enslaved by debt for overpriced education, Supreme Court decisions that reject the accumulated wisdom of the whole world about the definition of marriage and the meaning of a family, and the invention of new moralities that legalize the right to do evil under freedom of choice and equality under the law all illustrate a failure in common sense.

The consequences tell the whole story, and “by their fruits you shall know them.”

The test of common sense is that it works, prevents problems, simplifies life, and increases happiness.

It passes the test of time. It is true for all people in all times in all places. It is so valuable that it is transmitted in proverbs, folktales, stories, and oral tradition from one generation to another. It is the chief business of education and civilization.

The common sense Gepetto finally instilled in Pinocchio is not being taught, lived, or transmitted in modern culture, and the results are the same—undisciplined or unmotivated youth, wasteful governments and profligate adults, unwise teachers and judges who do not honor tradition, and the repetition of the same errors that created all the original problems.

Pinocchio finally learned not to run away from his father, from school, from work, from duty, and from promises:

“If I had been willing to study and to work, if I had stayed home with my poor father—I would not be here now in this lonely place, working as a watchdog for a peasant.”

Common sense does not run away, but thinks before it acts, sees before it plunges, and remembers the way life works for all people and makes no exceptions for boys and adults who do not care.