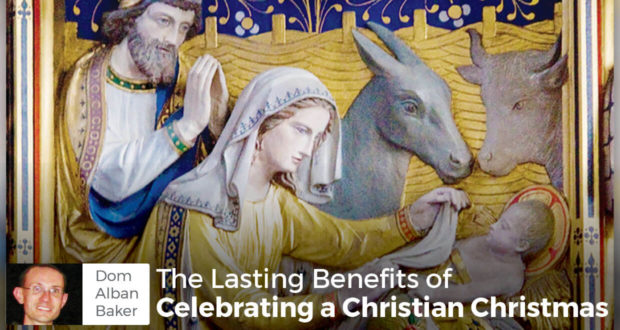 The Lasting Benefits of Celebrating a Christian Christmas

Dom Alban Baker admits that keeping the Christian Christmas in the face of the smothering Santa Claus version is a challenge, but one we should tackle!

As we are all too aware, the world, especially the retail world, begins to celebrate Christmas once Thanksgiving is over, and sometimes even earlier. Somehow, at least in the United States, the Santa Claus version of Christmas has slowly but pervasively smothered the liturgical celebration that commemorates the birth of Christ.

If we are to be firm in celebrating Christmas as the Church intends us to, a celebration that will be the most profitable to us spiritually and culturally, we must know why we as Catholics have the customs we do, which requires a careful look at history and the liturgy.

A simple contrast of the two versions of Christmas, the Santa Claus and the truly Christian, is that the one works up to Christmas in anticipation of material gifts, while the other prepares for Christmas in the hope of spiritual blessings.

Since the object of the former is the acquisition of material things, it is not surprising that once they are possessed, the reason for celebrating ends; after all, the point is not Santa, but what he leaves behind.

In our liturgical celebrations, we are waiting for Christ, and once He is born, we do not lose enthusiasm, but grow in it.

We delight that God has become man and share that joy with one another, both in church and at our homes.

In short, we can say that the world’s Christmas is about things, the true Christmas about God. When human celebrations center on things, they lack character and color; when centered on the divine, they breed further celebration and joy.

In the Church, to rightly mark the birth of Christ, we have a four week period of preparation in which we pray, do penance, and retire from the world.

This period imitates the final month of pregnancy of Our Lady, who retreated from Nazareth social life in order to protect the divine child in her womb.

In union with her, we contemplate the prophecies of the Old Testament about her Son: a virgin shall conceive and bear a son (Isaiah 7); the Spirit of the Lord shall rest upon him (Isaiah 11); Bethlehem shall be the place of his birth (Micah 5); kings shall come from afar to worship him (Psalm 71/72). And in union with her, we focus our attention on that child, earnestly preparing for his birth by cleansing our hearts.

Advent culminates in first Vespers of Christmas on December 24. We then celebrate the birth of our Savior from the evening of December 24 until his Baptism in the Jordan on January 13.

In the Latin Church, this tradition dates back to the 400’s, when the date for Christmas was fixed as December 25. Keeping the Epiphany on January 6 is much more ancient, and in the West, there is a separate feast for the Baptism a week later.

These feasts were always celebrated on their dates, and not on Sundays as they are now in the reformed calendar. This allowed for a certain solemnity and dignity to pervade the Christmas season, since the Church’s celebrations overrode the secular calendar.

The Baptism is part of the extended Christmas celebration because it was the second Epiphany; in the first one (to the kings) he appeared to the pagan world, while in the second one (the Baptism) he appeared to his own people, the Jews, with the Father and Holy Spirit giving testimony to his divinity.

During this three week period, the other significant feasts are St. Stephen, St. John and the Holy Innocents in the octave of Christmas and January 1 (which commemorates Jesus’ circumcision and Mary’s divine maternity).

There is even some reason to say that Christmas continues until February 2. The Marian antiphon is Alma Redemptoris Mater from Christmas until the Purification/Presentation, and first Vespers of the latter feast is taken from January 1, indicating it is a sort of elongation of the Christmas mysteries.

Historically, the Presentation in the Temple and Mary’s Purification according to Jewish law marked a certain end to significant events in Jesus’ infancy; we read no more of Jesus’ childhood until he is twelve years old.

Moreover, in the Jewish mind, the ritual to ‘purify’ a mother of her uncleanness in giving birth closed the legal implications of a childbirth and so would have been important in the lives of the faithful Jews that Joseph and Mary were.

So there is sufficient reason to continue to keep the spirit of Christmas at home during the weeks from January 13 to February 2, even if the Church’s liturgy no longer has that emphasis.

In summary, then, the Church asks us to prepare for the annual commemoration of Jesus’ earthly birth with four weeks of prayer, penance, and deliberate withdrawal from worldly things.

Then we celebrate His nativity for three weeks, marked by his birth in Bethlehem, his circumcision and naming eight days later, his adoration by the three kings, and then his baptism in the Jordan River as an adult.

This is in contrast to the worldly month long preparation in securing gifts and then the exchange of them on or around Christmas Day, and the abrupt end to the season on December 26 or soon afterward.

Given these historical and liturgical facts, how do we, as persons in the world but not of the world, align our wills and lives to the Church’s wisdom and derive spiritual benefit from her manner of celebrating Christmas?

Since Advent is now past, we should focus on celebrating Christmas for three weeks.

This requires a lot more energy than it might seem; experience shows that the six weeks of Lent are actually easier to keep than the seven weeks of Easter. For whatever reason, we have great difficulty rejoicing in good things for a prolonged period of time.

And yet the Church calls us to make the effort—to delight in the story of Christ’s birth and then the visit of the Magi, and lastly His Baptism.

To persevere in these things, we need to have some connection to the liturgy, whether it is in going to Mass more often or in attending Vespers at a local monastery or convent or in reading the Scripture for the day as a family.

We cannot expect to celebrate with perseverance unless we lean on the Church’s ingenuity and not our own. Perhaps the best idea is to consider going to Mass on the significant feast days during the week.

Since the Latin Church as a whole has chosen to observe Epiphany and the Baptism on Sundays instead of their historical days, why not take the kids to Mass on January 6 and 13 to impress upon them the importance of such days?

With diligence, one can usually find a monastery or convent which still celebrates those feasts on the traditional days, and if attending Mass is augmented by a festive meal or games or a day off from school, the children will remember that those days are special and these latter things can be done even when we cannot attend Mass as we might wish.

Keeping the Christian Christmas in the face of the smothering Santa Claus version is a tremendous challenge, but one we should be willing to tackle!

To firmly yet pleasantly resist our retail and secular ‘culture’ is the only way we will be able to pass on our faith in a lasting way.

Since Vatican II, the Church has called upon families to do this, rather than relying upon clergy and religious to do so.

It behooves us to respond to this calling, for it means not only being faithful to our duties as Catholics, but also opening ourselves to rich spiritual benefits for ourselves and our children.

Dom Alban Baker, CRNJ, received his Licentiate in Sacred Theology (S.T.L.) from the Dominican House of Studies in Washington DC. He is a member of the Canons Regular of the New Jerusalem, a monastic community serving the diocese of Wheeling-Charleston in West Virginia.
advent birth candlemass christian christmas christmas christmas about god dom-alban dom-alban-baker mass our lady preparation spirit of christmas 2016-12-24
Contributing Writers