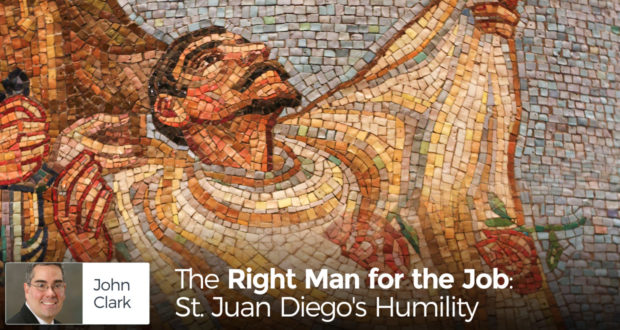 The Right Man for the Job: St. Juan Diego’s Humility

When Mary appeared to St. Juan Diego and requested a church in her honor, he was convinced that he was the wrong man. But he was the perfect candidate.

On this date, December 9th, in the year 1531, a Mexican man left his home and began his daily walk to Mass.

Though he was only a few years shy of his sixtieth birthday and the round trip journey to and from the Catholic Church was fifteen miles, this was still hardly an event which would make the news in any paper.

But on his way to Mass that morning, he met with someone who appeared to be a beautiful young Mexican girl. And because of that meeting, his life would never be the same. And neither would anything else. That day would mark the beginning of one of the greatest evangelization booms in ecclesiastical history.

The man’s name was Juan Diego.

But “Juan” is not what the girl called him. Instead, she called him by a more familiar name, a name that signified the affection by a mother toward her son—Juanito.

The girl asked him: “Juanito, where are you going?”

Juan Diego responded that he was on his way to Mass.

The young girl then introduced herself and her wish:

“Know then, that I am the ever-Virgin Holy Mary, Mother of the True God. I wish that a temple be erected here without delay. Go to the bishop’s palace in Mexico City and tell him what I desire.”

Nervously, Juan followed Mary’s request and met with the bishop—but the bishop was skeptical, to say the least. After all, Juan’s story sounded more than far-fetched; it sounded impossible.

Mary appeared to Juan Diego again the next day with the same request.

During this meeting, Juan did not doubt Mary—what Juan doubted was himself. Specifically, he wondered why he was chosen; in his mind, Juan counted himself among the least and lowliest of men. And so he implored and begged Mary to find someone more important than himself to transmit her heavenly message.

But the Mother of God stood firm in her request to him, saying: “I command that you go again tomorrow and see the bishop. And again tell him that the ever-virgin Holy Mary, Mother of God, sent you.”

So Juan went to the bishop again to inform him of Mary’s message.

Again, the Franciscan bishop was skeptical, asking for proof.

Mary appeared to Juan Diego two days later. This time, Mary had Juan cut roses, which she arranged herself, then wrapped them in his tilma, and said to take them to the bishop, along with her message.

When Juan arrived to see the bishop later that day, Juan opened his tilma and showed the bishop the fresh roses in winter.

The bishop was shocked to see that such magnificent roses had bloomed in winter, but something else amazed him, and this thing made him, and every man in the room gasp and fall to his knees.

Our Lady had left a miraculous, almost impossibly beautiful, nearly-life sized image of herself for all to see on Juan’s tilma.

Though made of a fabric that usually disintegrates within 20 years, the tilma and the image still exist five centuries later. And her appearance to Juan, along with the image, led to the conversion of eight million Mexican people to the Catholic Faith during the next two decades.

Today, December 9th, we celebrate the feast of Saint Juan Diego, the man who considered himself unworthy to speak to Mary, much less be the chosen one to deliver her message—the man who begged Mary to find someone more important than himself to be help fulfill Mary’s wish.

What a wonderful role model for us today!

Today, we live in a world that admires hubris—one that views self-centeredness not as a vice but a virtue; indeed, it is a world that is proud of pride. But 475 years ago, Juan Diego showed us what humility is. Let’s ask Saint Juan Diego for his intercession, that we may overcome the temptations of pride—that we may be graced with the virtue of humility.

Saint Juan Diego, pray for us.

Our Lady of Guadalupe, pray for us.