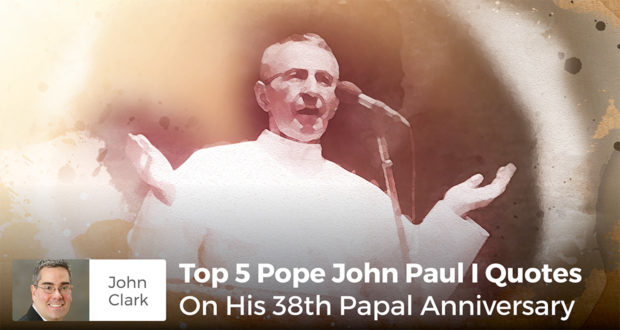 On the 38th anniversary of the election of Pope John Paul I, John Clark looks back at some of this little-known pope’s wonderful writings and speeches.

If the life of Albino Luciani could be summed up in a word, perhaps that word would be “improbable.”

His midwife baptized him shortly after his birth, as she recognized that he was in serious danger of death.

He was confirmed at age 6, entered the minor seminary at age 11, and was ordained a priest at age 22.

In 1973, he was made a cardinal, and only five years later, he was elected pope, taking a double papal name for the first time in history.

But though his Savior walked the earth for 33 years, Pope John Paul I, as the Vicar of Christ, served his Savior for only 33 days.

In the case of Pope John Paul I, we are presented with an historical anomaly and what seems like an ecclesiastical contradiction: an almost unknown pope.

But today, on the anniversary of his election, let’s take the opportunity to look back on his papacy, his genius, and his famous smile.

Below are five wonderful quotes issued during his short papacy. His beautiful words are an enduring smile to the world.

Pope John Paul I explains that trust and humility are essential qualities of Christians.

This message to the world, delivered the day following his election, assures us that God is always with us.

A dawn of hope spreads over the earth, although it is sometimes touched by sinister merchants of hatred, bloodshed, and war with a darkness which sometimes threatens to obscure the dawn. This humble Vicar of Christ, who begins his mission in fear yet in complete trust, places himself at the disposal of the entire Church and all civil society. We make no distinction as to race or ideology but seek to secure for the world the dawn of a more serene and joyful day. Only Christ could cause this dawn of a light which will never set, because he is the “sun of justice” (cf. Mal 4:2). He will indeed oversee the work of all. He will not fail us.

Pope John Paul I expresses that three truths, taken together, provide a powerful source of hope.

You will say further: how can this happen? It happens because one is attached to three truths: God is almighty, God loves me immensely, God is faithful to promises. And it is he, the God of mercy, who kindles trust in me; so that I do not feel lonely, or useless, or abandoned, but involved in a destiny of salvation, which will lead to Paradise one day.

Beautiful in its simplicity, Pope John Paul I offers us a gentle reminder that there is no true happiness apart from God.

God is too great, he deserves too much from us for us to be able to throw to him, as to a poor Lazarus, a few crumbs of our time and our heart. He is infinite good and will be our eternal happiness: money, pleasure, the fortunes of this world, compared with him, are just fragments of good and fleeting moments of happiness. It would not be wise to give so much of ourselves to these things and little of ourselves to Jesus.

When John Paul I expressed his desire to be a priest, his father replied: “I hope that when you become a priest you will be on the side of the workers, for Christ himself would have been on their side.” We can speculate that perhaps Pope John Paul I saw the countenance of his father when he spoke the following words.

Rome will be a true Christian community if God is honored by you not merely with a multitude of the faithful in the churches, not merely with private life that is lived morally, but also with love for the poor. These, the Roman deacon Lawrence said, are the true treasures of the Church.

The last Angelus of Pope John Paul I was delivered just four days before his death.

In his last Angelus, Pope John Paul I related the story of the sixteen French Carmelites of Compiègne who were martyred during the madness of the French Revolution.

During the trial they were condemned “to death for fanaticism.” And one of them asked in her simplicity: “Your Honor, what does fanaticism mean?” And the judge: “It is your foolish membership of religion.” “Oh, Sisters,” she then said, “did you hear, we are condemned for our attachment to faith. What happiness to die for Jesus Christ!”

They were brought out of the prison of the Conciergerie, and made to climb into the fatal cart. On the way they sang hymns; when they reached the guillotine, one after the other knelt before the Prioress and renewed the vow of obedience. Then they struck up “Veni Creator”; the song, however, became weaker and weaker, as the heads of the poor Sisters fell, one by one, under the guillotine. The Prioress, Sister Theresa of St. Augustine, was the last, and her last words were the following: “Love will always be victorious, love can do everything.” That was the right word, not violence, but love, can do everything.

Pope John Paul I concluded his message with this fatherly advice:

“Let us ask the Lord for the grace that a new wave of love for our neighbor may sweep over this poor world.”