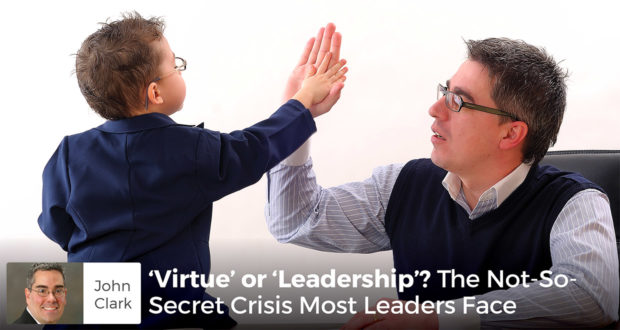 ‘Virtue’ or ‘Leadership’? The Not-So-Secret Crisis Most Leaders Face

Today’s buzzword is ‘leadership’. But most leaders struggle with an inability to lead – largely because of a lack of moral vision. Should virtue come first?

If you go to the websites of many schools, colleges, and universities in America, you will discover that today’s catchword is “leadership.”

Slogans like “Training Tomorrow’s Leaders Today” or “Training Future Leaders” are the clickbait of academic life. It’s easy to see why. Many parents might be wondering: Who in the world doesn’t want his son or daughter to grow up to be a leader?

Yet, if I may be so bold, I wonder if these parents are asking the right question.

Claiming to mold and shape leaders is by no means the exclusive domain of academia; the business world abounds with leadership books. Yet, despite the fact that the word “leadership” might appear in the titles, the main goal of these books often seems to be how to obtain power and money, for the sake of obtaining power and money.

On Wall Street, The Art of War by Sun Tzu was re-popularized for a new generation of three-piece-suited financial leaders. On many shelves, these titles presumably stand alongside the wholesale rejection of Christian ethics that is Ayn Rand’s Atlas Shrugged.

However, and this brings me to what I consider the most important question of leadership: What about virtue? It’s worth considering that Aristotle’s Ethics—in which he systematically outlined a moral philosophy of human action—preceded his Politics.

In other words, it was Aristotle’s intention that one must both learn virtue and practice virtue as an antecedent to governing, and not just to political governing, but to governing men—to leadership. For Aristotle, virtue wasn’t optional for what we could term “leadership.” It was essential.

Following Aristotle, as far as leadership is concerned, we should insist that men and women learn virtue and practice virtue before we teach them how to lead. But is that what we’re doing? In a word, no.

Dr. William Deresiewicz, a former English professor at Yale, made this observation about prestigious higher learning in America:

“…(W)e have constructed an educational system that produces highly intelligent, accomplished twenty-two-year-olds who have no idea what they want to do with their lives: no sense of purpose and, what is worse, no understanding of how to go about finding one.”

Deresiewicz is not alone; Ross Douthat and others have made similar observations.

One thing is certain: someone will lead—vision or not; virtue or not. Some ships of the human soul fail to pack a moral compass, but sail nevertheless. Though they have, in the words of Deresiewicz, “no sense of purpose,” these graduates of these prestigious schools will be the leaders of tomorrow anyway. In fact, their predecessors are the leaders of today.

Why? Why will the leaders from these prestigious colleges lead, even if they fail the vision test? The answer is that, though people lament the two-party system in America, we have a larger problem. In effect, we have a two school system. (It might be more than two schools; it might be four or five, but that fact is, like this sentence, merely parenthetical.) In America, our educational system is an aristocracy at best; at worst, it’s an oligarchy.

In a country with over 3,000 four-year colleges, 24% of the United States Senate is represented by graduates of five colleges. Not twenty colleges (which might seem more “representative” for a “representative Republic”). Five colleges. The current Senate has 54 lawyers, and 20 of those 54 went to one of four law schools: Harvard, Georgetown, UVA, or Yale.

A 2012 study illustrated that among the 500 CEO’s of the Fortune 500 companies, three schools (Harvard, Stanford, and the University of Pennsylvania) had awarded a total of 116 degrees to these executives.

There’s no doubt—if your primary goal is power and money, there are a handful of colleges to consider. Harder to understand is why. Why do these graduates rise to the pinnacles of industry and law?

Broadly, is the classroom education in these schools so much better than other schools? Specifically, is Stanford better than other schools at teaching its students to understand a corporate balance sheet? Are the accounting classes at Harvard so vastly superior, so magnificent, and so wonderful that it seems like they are using an entirely different system of mathematics than the rest of us mortals? Do the graduates of Georgetown Law School have a greater understanding of, say, patent law, than everyone else?

The problem is not that we are lacking leaders; the problem is that we are lacking virtue, primarily because we aren’t supposed to talk about virtue any more; after all, the answers might involve God and eternal law. However, the fact is that any time that we talk about leadership prior to virtue, or instead of virtue, we should expect problems. Leaders cannot convey what they do not have, and what’s more: without vision, are they really leaders at all?

If we really want to teach leadership, it would help to look at the great leaders. All the great leaders of persons—Saint Michael the Archangel, Moses, Alexander, Joan of Arc, Constantine, Cicero, Aristotle, Socrates, Leonidas, Churchill, Washington—communicated an unshakable belief in purpose.

For instance, many papal biographers and historians have observed that one of most admirable qualities of a pope is his reluctance to be pope. And this certainly applies to rulers, kings, and many of those who led well.

As General MacArthur put it,

“A true leader has the confidence to stand alone, the courage to make tough decisions, and the compassion to listen to the needs of others. He does not set out to be a leader, but becomes one by the equality of his actions and the integrity of his intent.”