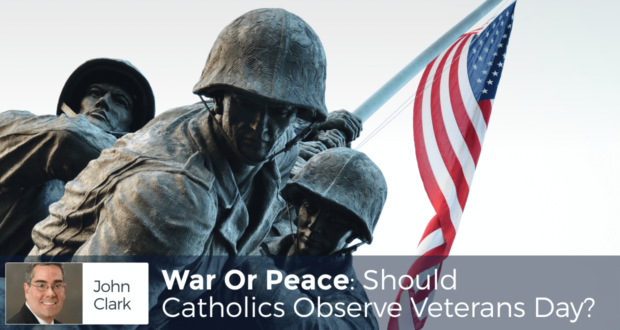 John Clark wonders whether Catholics should celebrate Veterans Day. If so, what should our response be for those promoting and protecting peace?

“Blessed are the peacemakers.”

These words of Jesus are viewed by some Christians as the definitive argument for pacifism (the total rejection of the use of force) and the definitive evidence that pacifism is inseparable from Christianity.

If peace making is good, the argument goes, how can we justify war? For that matter, if peacemaking is a beatitude, where does soldiering rank? And if soldiering is a lamentable career, how could a Catholic endorse Veteran’s Day—the civic celebration of soldiering in macrocosm?

As an answer to these questions, let’s begin by making an observation: nowhere does Scripture condemn soldiering. On the contrary, it outlines the precepts of proper soldiering. Recounted in Luke 3:14, soldiers asked John the Baptist how they should conduct themselves in their profession:

“And the soldiers likewise demanded of him, saying, And what shall we do? And he said to them, Do violence to no man, neither accuse any falsely; and be content with your wages.”

“For he (John) knew that soldiers, when they use their arms, are not homicides, but the ministers of the law; not the avengers of their own injuries, but the defenders of the public safety. Otherwise he might have answered, ‘Put away your arms, abandon warfare, strike no one, wound no one, destroy no one.’“

As Saint Augustine points out, John did not command the soldiers to lay down their arms; for that matter, John does not even offer the same counsel as Jesus did to the rich man; He does not say: “If thou seek to be perfect, lay down your arms and come follow Me.”

Why not? Because there is no inherent contradiction between soldiering and following Christ. In fact, there is no contradiction between perfect soldiering and perfect Christianity. Whereas riches presented a spiritual stumbling block to the rich man, soldiering did not seem to present a similar stumbling block for these men to achieve perfection. Though the profession of soldiering has its share of villains (after all, there are those who fight on the wrong side of just wars), the highest levels of virtuous people can be found within soldiering.

The reason for this is that just and perfect soldiering aims not at violence, but at peace.

“Those who wage war justly aim at peace, and so they are not opposed to peace, except to the evil peace, which Our Lord ‘came not to send upon earth’ (Matthew 10:34). Hence Augustine says: ‘We do not seek peace in order to be at war, but we go to war that we may have peace.’”

Where do good soldiers fit in within the equation of “Blessed are the peacemakers?” They are peacemakers.

Not only is there is no contradiction between peacemaking and fighting justly in a just war, but peacemaking might require taking part in a just war. This is the position of the Church, and She could hardly be clearer in Her official pronouncements. For example, the Second Vatican Council stated: “Those too who devote themselves to the military service of their country should regard themselves as the agents of security and freedom of peoples.”

The Catechism of the Catholic Church states: “Legitimate defense can be not only a right but a grave duty for one who is responsible for the lives of others.” Formally upholding the dignity of soldiering, the Catechism is clear that soldiering is a grave duty that springs from justice and charity. And while not all of us are called to this valorous profession and to this duty, we have a word for many of those who are.

They are called heroes.

Love for the Heroes

Many thousands of American soldiers have died in the course of promoting and protecting peace. It is sometimes said that they died to “further democracy” or to “protect liberty,” but those phrases often fail to properly express and explain the noble motives of the so many American soldiers. They fought for others. They fought and died to protect men, women, and children—laying down their lives for others.

Jesus had a word for that: love.

Thus, love must be our response to them. 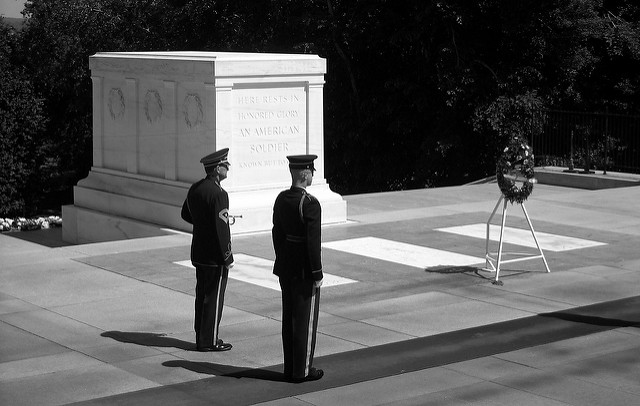 At Arlington National Cemetery, there exists the ‘Tomb of the Unknowns’, or as it is sometimes called: ‘The Tomb of the Unknown Soldier’. For the past eighty years, this tomb has been guarded every moment as a tribute to the fallen. It is a wonderful response by America to her troops, but there is a distinct sadness in this tomb—that many of those who fought and died are unremembered by name. But that does not mean that we Catholics cannot pray for them, nor does it mean that we cannot pray for every soldier who has ever served America.

Today, on Veterans Day, let’s pray for every American soldier who has died in war. Let our response be that love for others that is shown in praying for others.

Let us pray for them today to guarantee that nowhere does there exist a tomb of the unloved soldier.