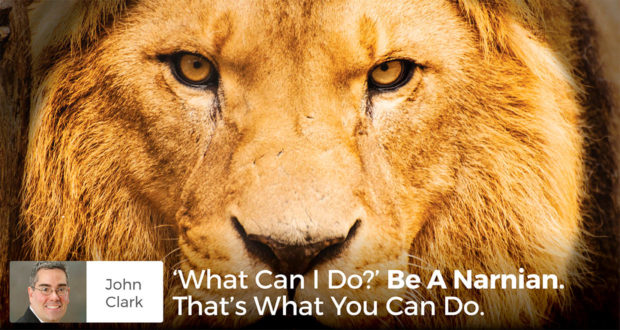 It’s not about big solutions but doing little things with love. John Clark on how to combat the darkness with the light and hope of Christ. Be A Narnian!

Over the past few months, as I have written about many of the troubles in world, I have received some readers’ responses essentially asking the question: What can I do?

As with so many questions, the answers to this question begin with faith, hope, and charity.

After all, He will never look away from you.

Whether you are in green pastures or by still waters or in the valley of the shadow of death, don’t blink.

If we stop hoping because things look bad in the world, we’re sort of missing the point, aren’t we?

St. Thomas teaches that the proper object of hope is not a worldly thing, but a Heavenly one—eternal happiness. Be a person of hope.

The world needs more good works from you and from me.

My friend St. Therese taught me that when I finally decided to listen to her.

We need to listen to her advice to do little things with love. Maybe St. Therese was telling us to beware of the Great Big Thing.

The world abounds with people trying to do Great Big Things that are noticed by the whole world. Today, the Great Big Thing is to “change the world.”

In itself, “changing the world” is hardly a noble goal, and it can be an awfully bad one. After all, Marx, Lenin, and Stalin changed the world.

Last week, as I was doing a lecture for my students, I mentioned that a lot of people talk about “changing the world.”

But I reminded them that there is something they must do first: don’t let the world change you. Don’t let your heart become, as Joseph Conrad put it, a “heart of darkness.”

Instead of changing the world, what if our goal were to do good and avoid evil?

What it lacks in exotic and spicy ingredients, it abounds in being a darn good recipe for living. We want to be Spanish saffron, Madagascar vanilla, or Indonesian cinnamon; but Jesus asked us to be salt—the salt of the Earth.

On a personal note, you know what else is funny?

As I look back on my life thus far, every time I tried to do some Great Big Thing to impress the world, I was doing it for my personal ego.

It was not the Great Big Things, but the little things I did for someone else, that were really important.

It was the little things that made a difference to someone else. And, alas, almost no one noticed these.

As St. Therese taught me, doing little things with love is what matters. A little thing might come in the form of saying a Hail Mary, thanking someone for his or her friendship, or buying him or her a cookies and cream milkshake. Or better still, all three.

For those who are troubled by the troubles of the world, one final thought on the matter: remember who you are. Remember that you and I are citizens of the City of God.

Live accordingly, even if no one else does.

“I’m going to live as like a Narnian as I can even if there isn’t any Narnia.”

In other words, I will live as a patriotic citizen of the City of God, even if no one else does.