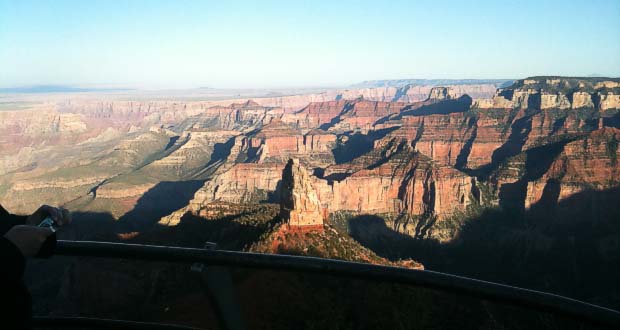 Almost everyone knows about and has seen pictures of the Grand Canyon, but did you know that the Grand Canyon is just one of the many national and state parks which are located on the Colorado Plateau? The Colorado Plateau is an area of about 130,000 square miles of upraised land in the states of Colorado, Utah, Arizona, and New Mexico. This plateau rises several thousand feet over the surrounding land. For example, the elevation of Phoenix, Arizona is 1124 feet above sea level. The elevation of Flagstaff, Arizona, about 140 miles north of Phoenix, is nearly 7,000 feet.

On the Colorado Plateau you will find 10 national parks and 17 national monuments, all of them certainly worth seeing. However, three of these parks in particular are both immensely beautiful and close enough to each other to make for an easy three-day trip. These parks are: Zion National Park, Bryce Canyon, and the Grand Canyon. 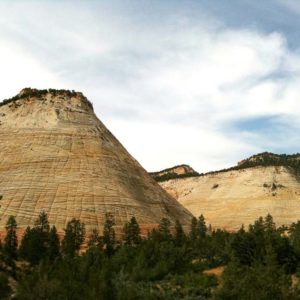 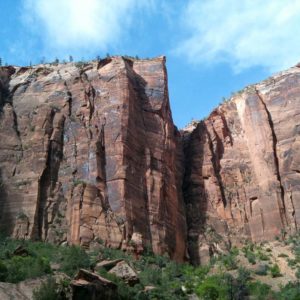 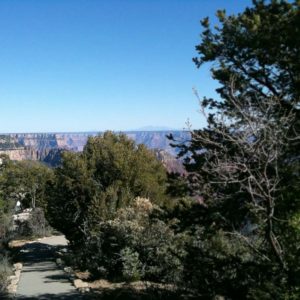 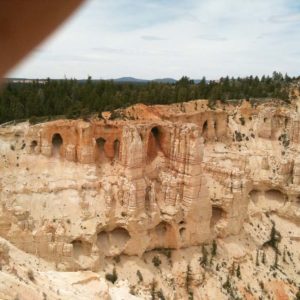 Arches and hoodoos at Bryce 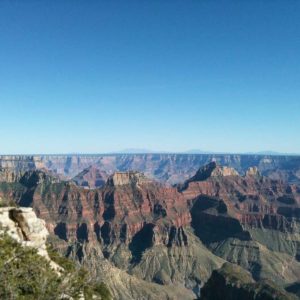 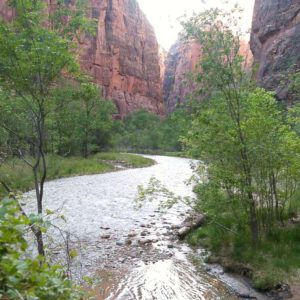 
If you are flying into the area, the most convenient city is Las Vegas, Nevada. If you’ve never been to Las Vegas, it is certainly something to behold. You might not be a gambler, but the spectacular hotels are unlike anything anywhere else. Nothing is done on a small scale in Las Vegas. There is also the added benefit that the Las Vegas hotels are incredibly inexpensive, since the casinos expect to make their money on gambling. Three and four-star hotel rooms are available in Las Vegas for as little as $25 a night. Watch out, though, for a little gotcha called a “resort fee,” which hotels don’t included in their base price and can be as much as $20 per room per night.

From Las Vegas, head east on I-15 toward Mesquite. By the time you cross the Nevada border and enter into the most northwestern corner of Arizona, you will notice that the mountains rise up to incredible heights in front of you. It looks like they will completely block your path, but heading around a corner, you see that the road goes up and over. The highway follows the beautiful Virgin River Gorge. The drive through the Virgin River Gorge is utterly spectacular, with walls of mountain rising thousands of feet all around you. Here and there, you catch sight of the Virgin River itself, which for most of the year is little more than a trickling creek, but for a few weeks a year is a mighty torrent.

Coming through the Gorge, you will pass into the city of St. George, Utah. Not only will you find plenty of hotels in this city of 75,000, but it is also home to a famous Mormon temple. For golfers, St. George offers the Red Rock Golf Trail, which will leave you admiring the scenery even if your golf shots don’t quite find the fairway.

Zion National Park is about 40 miles from St. George, located just outside the little town of Springdale. Zion has a unique system that lets you park your car in Springdale, and then hop on the series of buses that travel back and forth through the park. If someone were to posit that Zion National Park is the most beautiful place in the world, there are few who would scoff. The little Virgin River flows around and through massive canyons, with towering peaks of Navajo Sandstone. The sandstone cliffs let water pass through, ever so slowly, so that water from the top of the cliffs takes more than 1,000 years to filter to the bottom. Just a short hike from the Zion Lodge, a waterfall cascades 100 feet, bringing water that fell as rain upon the plateau a thousand years before. If you hike farther up the trail, two more waterfalls await. But if you don’t feel like hiking upward, then put on your swimwear, and feel free to wade and swim in the Virgin River. Or, if you prefer, take a ride on the pack horses.

If you drive your own car into Zion, you can continue on Route 9 through the Zion-Mount Carmel Tunnel, an incredible 1.1 mile feat of engineering which gives you access to Bryce Canyon and the Grand Canyon. As you drive up and through the tunnel, you navigate a series of switchbacks which take you ever higher up the canyon face until finally you reach the plateau above. You’ll want to stop at every overlook, but you’ll especially want to stop and view checkerboard mesa, a huge rock face with a series of vertical and horizontal fissures.

Once out of Zion Park, head northeast on Hwy 89 towards Panguitch. The distance from Zion to Bryce is about ninety miles, but like everything in Utah, it is a beautiful 90 miles. On the road, not far from Bryce, is Red Canyon, which is aptly named and sports colors that you almost won’t believe are real.

At Zion, you stand at the bottom of the canyon and look up, but at Bryce, you stand at the top and look down. The first thing you will notice is the elevation change. Bryce Canyon is between 8000 and 9000 feet, which is high enough for snow in late spring and early fall. The second thing you will notice is the hoodoos. Hoodoos are red, orange, and white spires of rock that can extend upward as much as 200 feet. In some place, the rocks stand like rows of infantry arrayed against an attacker. At other places, single spires jut up into the sky. In the massive Bryce Amphitheater, visitors can walk about the rim, from Sunrise Point to Sunset Point, and view such rock formations as Thor’s Hammer: a huge rock perched precariously upon a smaller neck of stone. Hikers can also pick their way carefully down into the Amphitheater and looks upwards. But remember that everything that goes down must also eventually come up, and it’s several hundred vertical feet to get back to the top.

From Bryce, heading back down Hwy 89, passing through Kanab, Utah, and Fredonia, Arizona, you will come to the turnoff toward the North Rim of the Grand Canyon. The North Rim is a great way to see the Grand Canyon, because it is much less crowded that the South Rim, receiving only a fraction of the visitors. It’s also cooler because of the higher elevation—but this means that the North Rim is open only from mid-May until mid-October.
The scale of the Grand Canyon is quite literally unimaginable. Relating the facts that it is 277 miles long, up to 18 miles wide, and a mile deep gives an impression of the immensity, but only an actual visit can bring true understanding.

At the North Rim, a number of small cabins are available for rent, but you’ll want to plan ahead to make sure you can get one. You can also stay at the Grand Canyon Lodge, which sits right on the edge of the Canyon, near Bright Angel Point. The views from the Lodge are breathtaking, and even if you don’t spend a night there, you might want to eat your lunch in the dining room, with a fantastic view of the Canyon below. From the Lodge, it is a short drive to Point Imperial, the highest elevation of the North Rim at over 8,800 feet. The Point Imperial overlook extends out into the Canyon and gives a beautiful all-surrounding view of the Canyon and the plateau beyond. For those afraid of heights, though, it can be a little daunting.

These three parks on the Colorado Plateau are each spectacular, and each in a different way. A trip to these parks is something that your children will never forget. And neither will you.

Note about costs: Each of the parks charges a $25 entrance fee per car, which is good for seven days. An annual pass to all US National Parks and Monuments costs $80, and can be purchased either at a park, or online at http://store.usgs.gov/pass.