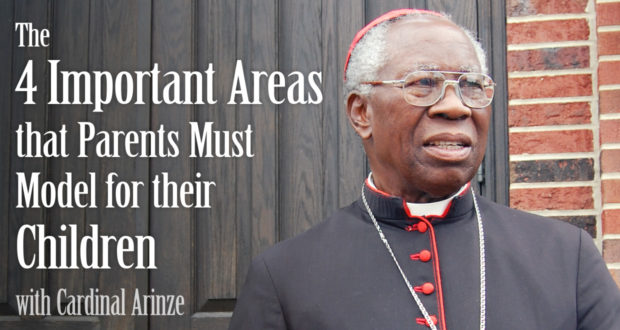 The 4 Important Areas that Parents Must Model for their Children

“Honor your father and mother” (this is the first Commandment with a promise), “that it may be well with you and that you may live long on the Earth” (Ephesians 6:2-3).

Cardinal Francis Arinze, Prefect Emeritus of the Congregation for Divine Worship and the Discipline of the Sacraments, celebrated a special votive Mass on the family at Christendom College on Friday, July 10, 2015. It was a very moving experience, especially in light of the recent attacks on marriage and the family in our nation and around the world.

His Eminence affirmed the constant teaching of the Catholic Church that the family is the domestic church, an integral part of society. The family draws strength from the Holy Family of Jesus, Mary, and Joseph. It is in the family that children receive their first education in the Catholic Faith. Parents are the primary educators of their children.

There are four important areas that parents need to model for their children: faith, prayer, courage, and evangelization.

First, parents need to live out their faith in Jesus Christ, so that their children see, from their own parents, what it means to be a good, holy Catholic and disciple of Jesus Christ. If the children see this faith in their parents, they will catch it.

It is better if faith is caught, rather than just taught or talked. God has entrusted parents with their children. Every child is a gift from God, more important than our bank account. Of course, the bank account can be important too, the cardinal said with a smile, since we need it to support our family. But the children are more important.

Second, prayer is vital to the family. Pray in the morning, even if it is a short prayer. Pray in the evening; this may be a bit longer. Also, families should pray the Rosary. “Where there is a will, there is a way,” the cardinal said slowly.

He asked how long people spend watching TV or reading the newspaper; it probably takes a lot more time than it does to pray the Rosary. “Where there is a will, there is a way,” he repeated with a smile.

Third, families need courage, especially in today’s often hostile world. Parents need to be willing to go against the current of the culture, which is often heading in the wrong direction.

Those in lofty positions, whether they be at the United Nations, in Geneva, or in the highest courts, sometimes tell us things about marriage and the family that are not true. Parents need to have the courage to speak the truth to their children. The Sacrament of Holy Matrimony gives them the grace to have the courage to do this.

Each sacrament confers a special grace upon us. Baptism gives us the grace to become Christians and enter the Church. Confirmation strengthens this in us. The Holy Eucharist nourishes us. And so forth. The Sacrament of Holy Matrimony gives a husband and wife the grace to grow in holiness. Their marriage is the primary means by which they obtain salvation.

The fourth area that parents need to model for their children is Christian evangelization. The parents are the first evangelizers of their children. It is in the family where children first learn the fundamentals of religion. These fundamentals are adoring God, thanking God, praising God, expressing contrition to God, and making supplication to Him. The best way for parents to teach these fundamental principles of religion is to live them out, so that the children see their parents modeling these behaviors for them.

Evangelization begins at home. But it should also spread outside the home. Families should reach out to others, especially those who are marginalized in some way. These may be young families who need help, those who are drifting from the Faith, or others who are struggling in some way. How many bishops are there in our diocese, the cardinal asked rhetorically?

The bishop can’t be everywhere, and when he speaks, some might feel that he is just saying what they expect him to say. But when families reach out to their neighbors and bear witness to their Catholic Faith, they can sometimes have a greater impact. They are facing the same struggles as their neighbors, so their neighbors may see them as being more credible.

Let’s say a person has billions of dollars and decides to purchase his own Jumbo 747 Jet. This person says that he’s not going to listen to the air traffic controllers when he plans the route in which he’s going to fly his jet. He’s also not going to listen to the makers of the jet or the engineers who designed it. The person says, “It’s my jet, and I can do what I want with it.”

Cardinal Arinze wryly remarked: “I am not going to be a passenger on that jet,” and the congregation laughed. In fact, he added, “I do not want to be anywhere along the route where that jet flies, if it gets off the ground at all, because that jet is going to crash.” Likewise, we must follow the Creator’s instructions when it comes to marriage and the family.

May Mary, our Most Holy Mother and Saint Joseph, her Most Chaste Spouse, watch over and protect us, and all families. Amen.