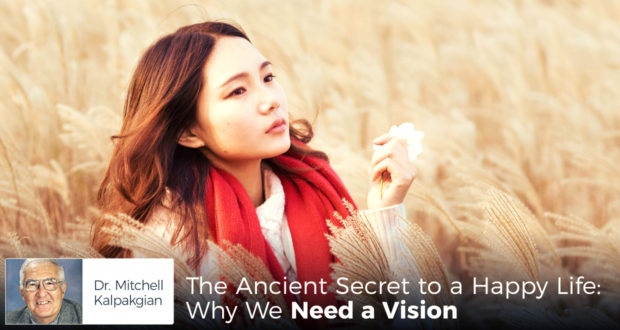 The Ancient Secret to a Happy Life: Why We Need a Vision

People consider the future in many ways. Some attempt to predict it, some prepare for it with foresight and prudence, some live day to day and do not look too far ahead, some look forward with hope and trust, and others foresee the future with anxiety and fear.

However, another approach to the future is to imagine it with a vision—a picture of some beautiful ideal that attracts and inspires a person toward a goal, some shining star that gives direction and purpose so that a person does not just meander or wander through life from day to day with no special destiny or vocation.

The vision gives a glimpse of some noble end or final accomplishment in the distant future. While it resembles a dream because of its uncertainty, it is not some ideal, frivolous wish often named “a castle in the air.”

It embodies a form of moral excellence or great goodness for human beings to attain as they aspire for the best and highest.

The Knights of the Round Table

King Arthur’s Knights of the Round Table committed themselves to a vision of chivalric service and fidelity to their vows. Howard Pyle writes in The Story of King Arthur and His Knights,

Cervantes’ Don Quixote lived according to a vision dedicated to restore the beautiful Golden Age of the past to the crass Iron Age of the sixteenth century devoid of Christian charity, hospitality, innocence, modesty, and justice:

“All then was peace, all friendship, all concord . . . . Neither fraud, nor deceit, nor malice had yet interfered with truth and plain dealing.”

The Romans held in awe the vision of their nation shutting “the grim gates of war” and establishing the famous Pax Romana that established a hundred-year reign of peace in the Roman Empire.

When Aeneas, the Roman epic hero of the Aeneid, visits the Underworld to receive a prophecy of the future of Rome, his deceased father reveals the glorious future:

“But you, Roman, remember, rule with all your power the peoples of the earth—these will be your arts: to put your stamp on the works and ways of peace, to spare the defeated, break the proud in war.”

All great achievements begin with a vision that remains steadfast in the minds of those inspired by the ideals that shine with illumination.

Not an ‘Idyllic Picture’

A vision, then, is not some idyllic picture or vague dream of some unrealistic fantasy but an image of a final achievement or great good that dedication to the vision accomplishes. Every devout married couple begins their life with a vision of the beloved as a dream come true, an answer to a prayer.

They foresee the fruitfulness of love and the blessing of children and commit to the vows of fidelity and indissoluble love. The guidance and light of a vision—what Dietrich von Hildebrand calls “the magnificence of marriage” elevates human life and ennobles all that a person does because marital love serves a great cause, brings happiness to many, and multiplies the good.

While all great accomplishments and fruitful lives begin with a vision of the noble, the good, the beautiful, or the holy, the memory always needs to keep the vision alive and present because the business of life tends to blur the picture of the ideal or reduce it to a dim memory.

However, the vision is not some momentary glimpse of a brief event in the past but a shining light, a beautiful star to gaze at again and again in order not to lose the way or to lose hope.

The ideal glimpsed in the vision requires periodic contemplation lest it lose its clarity, beauty, or wonder.

A Commitment to Inspiration

The Knights of the Round Table who model magnanimity and chivalry never lose sight of their covenant and promise to King Arthur.

Don Quixote upholds his profession of knight-errantry and remains faithful to his beloved Dulcinea despite offers of marriages from wealthy princesses.

Aeneas remembers and keeps his oaths to the gods rather than submit to the temptation of Dido to remain in Carthage rather than found Rome.

Doctors who follow the Hippocratic Oath, political leaders who pledge to honor the United States Constitution, priests who embrace poverty, chastity, and obedience, married couples who promise before God to love, honor, and cherish each other and accept children all witness to a beautiful vision they will follow and recall throughout the pilgrimage of life.

A vision is a light to follow, a beautiful star that inspires wonder, a sublime ideal that awakens the noble and honorable in human beings.

Without visions man’s sight never transcends the economic world governed by self-interest, profits, and the love of money or the realm of popular culture dominated by the idolatry of pleasure.

Without visions men and women never make a gift of themselves to each other and to their children in marriage. Without visions human nature rests in complacency and self-satisfaction, never noticing the beauty of the light or the glory of the stars and never appreciating the presence of the sacred.

Without visions a person has no heroes or saints to imitate, no family name or profession to honor, and no great love to offer to any person or to any cause.

Look at the Stars!

However, with vision man sees heavenly beauty, the purity of the human heart, the wonder of goodness, the mystery of the soul, and the greatness of man.

The gift of poets to their fellow man is the vision they offer. The Psalmist writes, “Praise the Lord from the heavens, praise him in the heights” and “I lift up my eyes to the hills” and “To thee I lift up my eyes, O thou who art enthroned in the heavens!”

In “The Starlight Night” Gerard Manley Hopkins begins, “Look at the stars! Look, look up at the skies! / O look at all the fire-folk sitting in the air!”

In “My Heart Leaps Up” William Wordsworth exclaims, “My heart leaps up when I behold/ A rainbow in the sky; / So was it when my life began; /So is it now I am a man.”

As all these poetic lines illustrate, with vision a man comes alive, looks above and beyond, feels young at heart, rejoices and wonders, and anticipates the future leaping for joy and running like the deer panting for water: “As a hart longs for flowing streams, so longs my soul for thee, O God” (Psalm 42:1).