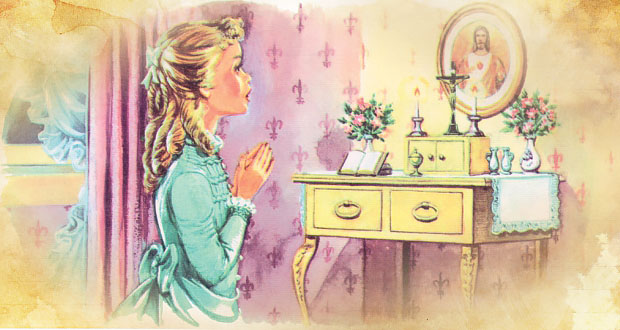 What are the Marks of a Truly Catholic Family?

Editor’s Note: These are selections from a talk given by Archimandrite Father Constantine Belisaurius on June 8, 2002, at the Immaculate Heart of Mary Conference in Washington, D.C.  This article was originally published in the December 2002 issue of Seton Newsletter, Volume 19, #12.

Most of us realize that the twentieth century was a watershed of all kinds for the Church in general, but since the family and families are the very heart of the Church, the disappearance of the Catholic family is quite obviously an assertion of epochal proportions.

By disappearance, I do not mean to say that there are no Catholic families at all, but that they are not at center stage.

What is a truly Catholic family? I have known Catholic families and I know how much light they were in the 1950’s. One family I knew as a seven-year-old boy touched me by the very fact that the father of the family led the Grace of the meal with the Sign of the Cross and the prayer asking for God’s blessing. A small thing, but small things speak to pure hearts.

The Marks of a Catholic Family

The Catholic home is a home set apart. It is a holy place. There is a niche or a small place in a Catholic home which is set aside just to remind us of God. In the great Catholic homes of the past, the center of the manor was the family chapel.

In the more modest home of modern Catholics, there is a family altar or an Icon Corner or God’s Space.  Here can be found the family Bible, the prayer book, the picture of the Sacred Heart, a picture of the Immaculate Heart of Mary, pictures of the patron saints of the family, or scented candles or even incense which makes the family prayer time very special.

There is something very special about the two hearts which consecrate the family as nothing else does. I will never forget the time I visited my Pentecostal aunt.   I was astonished to enter her living room and find two life-sized color prints of the Sacred Heart and the Immaculate Heart of Mary hanging over her couch. I could never think about Aunt Opal in the same way again. She was a very special lady after that day.

The home is so important, that many Catholics refuse to live in any place that has not been blessed by a priest. This is an excellent practice. It shows a supernatural appreciation of the state of affairs that is the fruit of a living faith. It is a family not only of Catholic words but Catholic deeds.

An Outpost of Heaven

The Catholic home—embellished with crucifixes, holy water fonts, statues, and pictures—speaks to even a casual visitor of the presence of the Lord and His kingdom, of which this home is an outpost.

The Catholic family is also embellished with practices that call out to those who have ears to hear. In the Catholic family, Sunday revolves around Holy Mass. And the family dinner together. Much of the cooking would have been done on Saturday after Confession in the local parish church.

There were sung vespers on Sunday afternoons which closed off Sunday with Benediction of the Most Blessed Sacrament.

The children of the Catholic family would have gone to the Catholic school in which the most important thing was the communication of the Faith by religious who had given up everything to teach these children, and to wearing this habit, and to living this life.

Holy days would have been holidays and special celebrations underlining the very great importance of Christmas and Easter and Pentecost, Our Lady’s Assumption, Sts. Peter and Paul.

May was the month dedicated to Our Lady and there was a May altar in every classroom. There was a coronation of Our Lady’s statue in a special ceremony that was celebrated with great pomp and circumstance, and great love.

Nor was this the end! The parish had its yearly mission with the opportunity to go to Confession to priests who did not know you. Sermons called to repentance and renewed fervor to which the whole family went during the parish mission.

There were forty hours devotions which involved a short course on the adoration of the Most Blessed Sacrament. There were special nine days of prayers called novenas, based on the nine days before the feast of Pentecost when the Church asked the Holy Spirit to come upon her. These novenas asked for the intercession of St. Anthony, St. Rita, St. Francis Xavier, St. Lucy, or other saints for which there was a special devotion or special need.

There was a similar pattern of prayer inside the home.  There were times of family prayer, sometimes in the morning or the evening or both. There was always grace before meals, and sometimes reading of Sacred Scripture. There was the Family Rosary with the observation of Father Peyton that the family who prays together stays together.

The father of the Catholic family was not an adulterer. His children were not fornicators. He and his wife did not practice birth control. His daughter never gave a thought to fashion and its immodesties, but rather was known for loveliness, chastity, and good manners.

Sons were known as the pride of their mothers, chaste in speech, chivalrous in their dealings with girls, and honorable in their games, which they did not take to be the most serious thing in their lives.

Should the family be blessed with the special cross of a special child, they gathered around that child and did what seemed to be best, trusting in the power and mercy of God.

The Catholic family was a family of culture. They appreciated music, painting, sculpture, and other kinds of celebration of beauty, which they often found in the parish church. Members of the family usually played musical instruments for the family’s entertainment.

They organized theatricals based on mystery plays and the lives of the saints.

And everyone knew what that meant.

Father Constantine, a counselor for Seton since 1995, obtained his Master’s in Divinity is from St. Mary’s University, Halifax Nova Scotia. Father was ordained as a Melkite (Byzantine Catholic) priest in Cairo, Egypt.