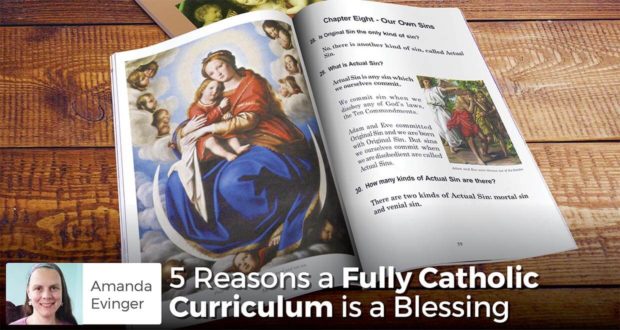 5 Reasons a Fully Catholic Curriculum is a Blessing

Amanda Evinger has five reasons why “keeping it Catholic” is a true blessing for her family when it comes honoring God through her homeschooling curriculum.

When we crack open our Seton textbooks, do we realize we are unpacking powerful armor to fight the battle for souls?

Do we comprehend the tremendous gift that is within their pages and the potential it has to bring the reign of the Sacred Heart into our world today?

By using the divine gift of a curriculum saturated with Catholic content and adherent to a Catholic point-of-view in all things, we can be at peace, knowing we are pleasing Christ, who is thirsting for our children to know the Truth. Here is a list of five reasons such a curriculum is a blessing:

When we use a fully Catholic curriculum that incorporates orthodox Catholic texts for all its main subjects, we know we are responding to the desires of Mother Church for Catholic education. This may seem obvious, but much of authentic Catholic education, in diocesan schools and in home schools, has been lost in the last few decades.

Recently, when I was talking to my mother-in-law about homeschooling, I was impressed by her simple attitude. She homeschooled her own 10 children, and she said her main concern was that they used Catholic texts for nearly every subject and that her children were kept away from the harmful influences rampant in the public educational system.

She remarked that, when she was growing up, she went to a Catholic school and nearly all texts they used were Catholic, and religion was taught daily — that was the norm for Catholic schools in the 1940’s, 50’s, and 60’s. Another article in Seton’s Online magazine titled, Is Seton Too Catholic? explains: “A Catholic curriculum should be a coordinated curriculum that never loses sight of God’s supremacy in all things.

The importance of this was declared by Pope Leo XIII in the 1897 encyclical, Militantis Ecclesiae, ‘The Church Militant’, where he wrote: ‘Religion must not be taught to youth only during certain hours, but the entire system of education must be permeated with the sense of Christian piety. If this is lacking…small benefit will be derived…; instead damage will be done.'”

You know you are using your precious time with your children wisely when you use a fully Catholic curriculum. For homeschooling families, time is a real treasure. We realize we only have a short number of years to make a grand impact on our children, which will likely determine their earthly and heavenly destinies.

By using a curriculum, like Seton, penetrated with the Faith, you know each minute can be given to God clearly and surely and meet a greater purpose. As the encyclical The Christian Education of Youth explains, “Every form of instruction, no less than every human action, has a necessary connection with man’s last end, and therefore cannot be withdrawn from the dictates of the divine law…”

We only have so many minutes in the day, and teaching the Faith should always be a priority, but it is difficult to remember do so without the support of Catholic texts. The Christian Education of Youth declares, “… it is necessary that all the teaching and the whole organization of the school, and its teachers, syllabus and textbooks in every branch, be regulated by the Christian spirit, under the direction and maternal supervision of the Church; so that Religion may be in very truth the foundation and crown of the youth’s entire training.”

You know you are honoring a time-tried tradition of integrating the Catholic faith into education in every way possible. From the origin of Christian culture, followers of Christ were known for their intense catechesis and separation from the world. Why should it be any different, now that our culture is more in need of the light of Christ than ever?

Your hard-earned dollars are going towards a publisher that supports the Church. What a blessing to know that any profit made from your purchases will go towards individuals and families who love Christ and the Catholic Church. As a former Calvinist, I know the subtle Anti-Catholic messages and attitudes so prevalent in both secular and Protestant educational texts, and I want to do whatever I can to give my children other options.

We all need the continual support of faith-based books, including school books. A friend of mine said one time that she loves using Seton textbooks because, as a mother, she needs to glance at images of the Blessed Mother on the pages to gain patience when teaching her children.

Plus, Catholic texts promote family-friendly ideals and present far more wholesome examples of life than secular or Protestant texts. I don’t know about your house, but at ours, “monkey see monkey do” is a popular game! Considering the nature of children, it pays to be on the “safe side” when it comes to what enters the door of your home school.

Born in Ann Arbor, Michigan, Amanda Evinger now lives in rural North Dakota with her husband Michael and their three young children. Together, they have two home businesses, keep a bountiful garden and care take St. Clement's Oratory. Amanda is passionate about being a Seton homeschooling Mom and dedicated homemaker. She also works from home as Senior Writer for Catholic Stewardship Consultants. Although raised Calvinist, she became Catholic in 2001, and then spent several years living with Blessed Mother Teresa's sisters and the Contemplative Sisters of St. John. She holds a Bachelor's Degree from Hope College in Spanish and Theology with minor studies in Creative Writing.
amanda amanda-evinger catholic curriculum education evinger fully catholic homeschool love for christ seton support 2016-11-21
Contributing Writers