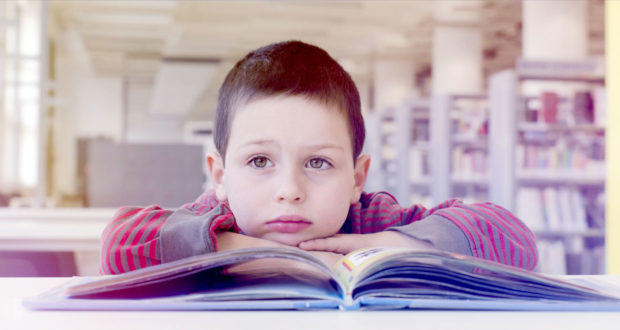 How to Get a Speed-Reader to Remember What they Read

I have a fourteen-year-old daughter who struggles horribly when it comes to reading comprehension.

Not only this, but she also struggles when it comes to retaining anything that she reads. In the past, when I would give her something to read, she would read it, close the book, and say, “Okay, I’ve read what I’m supposed to read. What’s next?” When I would question her knowledge of what she had just read, she wouldn’t be able to answer me.

My daughter’s problem is that she reads too fast. She doesn’t know how to slow down in order to digest and absorb what she is reading.

When you have children who struggle in this area, you have to work a lot harder with them than you do with others who can simply pick up a book, retain, comprehend, and impress you with their understanding. My daughter is not able to read whole chapters of textbooks at a time. She can read them, but she would not be able to fully comprehend or retain anything that she read because of her tendency to “speed read.” Simply reading words is not the same thing as comprehending them or retaining knowledge.

To help her in reading comprehension and retention of material just read, I have to teach her using smaller portions of material and expounding on those small portions. After expounding, I then write out questions for her to answer, forcing her to slow down and digest what she has just read. Instead of having her read, say, six pages of a textbook, I’ll only have her read one page, but I’ll write out questions for her to answer so that she will be forced to slow down and take in what she is reading.

It’s a lot of hard work, but it pays off in the end because she is able to retain and understand material given to her to read. This goes for any subject, whether it is religion, history, science, etc.

Our goal in homeschooling is to educate, not simply to assign our children mountains of books to read. A man who reads one sentence and says, “I have learned” has achieved much more success than a man who has read an entire book, yet asks, “What have I learned?”

Slow Down and Retain

When I write out questions, my daughter then has to write out the answers to them using cursive writing. This is a great way for her to practice her penmanship, and it teaches her proper sentence structure. I make her write out the answers because it’s been proven over and over again scientifically that writing helps you to remember things better. Because I want her to retain information, I make her write out answers to things that she has just read. It may look elementary, and it may sound elementary, but it works.

Since we’ve been slowing down by working with smaller portions and then doing questions and answers that pertain to those smaller portions, my daughter has not only been able to learn more, but she is able to retain what she reads. I also want to remind the reader that this question and answer method is what made (and continues to make) the Baltimore Catechism so successful.

Below is a sample of a religion lesson that I typed out for my daughter. I took a simple verse of Scripture, taught it in such a way so that she would fully understand it, and then wrote out questions for her to answer. The questions seem repetitive, but they help her to slow down in her reading so that she can retain what she has just read. They also force her to think about the lesson. At the end of the questions is a Meditation Question.

By adding this Meditation Question to the lesson, it encourages my daughter to see how this particular Bible lesson relates to her. By meditating on the question, it hopefully places her in a position where she will be open to any corrections that the Holy Spirit wishes to make in her life in regard to what she has just read. It teaches her the practice of praying with Scripture.

If you have younger children, obviously, you won’t have as many questions, and that’s okay! Our goal is to transmit knowledge and to help our children retain and comprehend what they’ve just read – not to bury them beneath a mountain of textbooks that take up their time in reading, but teach them very little at the end of the day. Speed-reading is not what we’re after; what we desire is comprehension of what we have just read. Without comprehension, there can be no education.

I just thought I’d pass this little tidbit of advice on to any of you who might have children who are struggling in the same way that my daughter is. Remember, this method can be used for any subject, not just religion!

“I will greatly increase your pains in childbearing; with pain you will give birth to children. You shall be under your husband’s power, and he will rule over you.”
[Genesis 3:16]

Although the Lord God loved Eve very much, He still punished her for disobeying His command. Just because God punishes us does not mean that He no longer loves us. Truth be told, His punishments are a sign that he does love us, for the Bible teaches that God loves and punishes anyone whom He accepts as a beloved son or daughter when they deliberately sin against Him.

He does this because He loves us and wants to teach us a lesson so that we will remember the painful consequences of our disobedience and not make the same mistake again. Because Eve ate from the tree of the knowledge of good and evil in defiance of God’s command, her act of disobedience had to be confronted, dealt with, and punished.

Eve was punished by God in two ways:

Sin, however, changed this. Although Eve had been blessed with equality, she had used it unwisely. Now, it would be taken away from her. (Let this serve as a lesson to all of us – male or female – that blessings used unwisely will eventually become blessings taken away if we do not repent).

This does not mean that a husband should rule with brute force or as a tyrant, nor does it mean that a woman has no say whatsoever in her own home. A good husband will consider his wife’s opinions, suggestions, and wishes. Not only this, but the husband is commanded by God to love his wife in the same way that Christ loves the Church, which is His Bride. A man who treats his wife in any other way does so because He does not listen to Christ and has chosen to rebel against what God has commanded.

But because the husband is the head of the house, it is he, and not the wife, who has the final say. The only time when a woman should not listen to her husband is if he tries to force her to sin against God. Then, her allegiance to her Heavenly Father must come first, and her husband’s wishes must be ignored. We see this clearly in the fifth chapter of the book of Acts.

In this chapter, we read the story of Ananias and his wife Sapphira. Ananias did something wrong, and his wife went along with it instead of refusing to sin against God. When God punished Ananias, she was punished as well, because she chose to follow her husband’s wishes instead of the Lord’s command against lying. If she had said, “Although you are my husband, my allegiance is to God before it is to you,” her life would have been spared and only her husband’s life taken.

Unfortunately, because of God’s decree that from now on, a man will rule over his wife, some cultures and religions have come to the wrong conclusion that males have greater value than females. But nowhere in the Sacred Scriptures does God declare this. This is a false idea which has been embraced by men who wish to twist the Scriptures to appeal to their own vanity and sense of pride.

A man’s value comes from the fact that he was made in the image of God, and in this, all men are equal. Those who think otherwise do so because they look at life through the cracked lens of man instead of through the eyes of God.

What the man was given was authority over the woman, not greater value. Cultures and religions that do not acknowledge this do so because they are ignorant of God.

To what extent am I yielding to the God-given authority of my father in my own home?