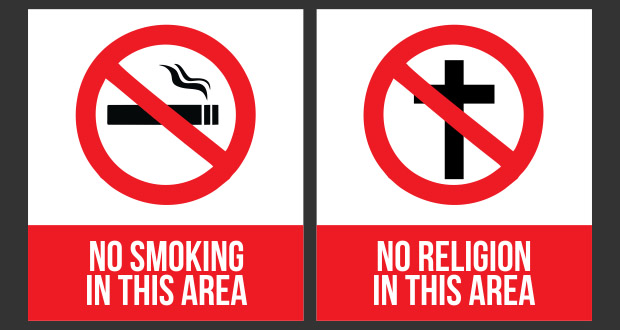 Smoking and Religion: Two Things You Can’t Do in Public

The legislature of Arizona recently passed a law which allows a business to assert a free exercise defense if it is accused of discrimination for refusing to provide a service to a customer. The Arizona law, which has gone to Governor Jan Brewer to sign or veto, closely tracks the wording of the federal Religious Freedom Restoration Act. In order to claim a religious exemption to otherwise applicable laws, a person or business must show they are motivated by a sincerely held religious belief and that compliance with the law would substantially burden that religious belief.

When the Religious Freedom Restoration Act (RFRA) was enacted in 1993, it was passed unanimously by the US House of Representatives and with only three dissenting votes in the Senate. That is about as uncontroversial as a law can be. The Arizona law, which is substantially similar, is about as controversial as a law can be, and has been widely condemned as based upon hatred and intolerance.

When the RFRA was passed in 1993, religious freedom was accepted by almost everyone as a core American value and an important component of a good society. To allow people freely to exercise their religion is to accept them as members of society. Alternatively, to tell them that their sincerely held religious beliefs will not be permitted—and indeed that those beliefs will subject them to legal peril—is to to put them outside of society. To put it more simply, a Catholic can never be a full member of a society which believes that the Catholic Faith is a hate crime.

Religious freedom is not merely a theoretical argument, and it certainly is not something that Catholics can take for granted. The Arizona law was not passed merely to make a statement about some future possibility. It was passed because more and more lawsuits are attacking free exercise, especially whether traditional moral views will be permitted in a society which rejects those views.

The Fight for ‘Equality’

Across the border from Arizona in New Mexico, the court recently decided that a photographer could not refuse to photograph a homosexual commitment ceremony. The court held that being forced by the government to violate one’s sincerely held religious beliefs was simply “the price of citizenship.” (Elaine Photography v. Willock, #92) The New Mexico case is not isolated. All around the United States lawsuits have been filed against photographers, bakers, wedding venues, and other type of businesses in which the proprietors do not want to promote or participate in same-sex marriage.

Same-sex marriage is often portrayed as a fight for equality, but in these cases, it is not equality that is being sought, but rather the right to force other people to violate their beliefs.

If these lawsuits were being pursued only by individuals and not by the government itself, it could bring us some comfort that at least the government is neutral toward religion. That is not the case, however. The federal government is currently doing its best to suppress free exercise of religion, relying on the Affordable Care Act as its chosen weapon. Despite having granted innumerable exceptions and waivers, and feeling no obligation to implement the ACA as written, the federal government has made one thing clear: it will not make exceptions or issue waivers or fail to require religious groups to pay for contraceptives.

Nancy Pelosi said we’d have to wait until the ACA passed to see what’s in it. Well, now we know that attacks on religious freedom are what’s in it.

Regardless of the outcome of these suits in the coming years, religious freedom in the United States will remain under attack. In the circles of power these days, religion is thought about approximately the same as smoking—if it is something to be allowed at all, it must be put off to the side and hidden. Religion, like second-hand smoke, will only be permitted if it has no effect on anyone else. Like smokers, who must go to special area to puff away, religious people might be allowed to practice their religion in their churches; but woe to him who brings his beliefs outside the church door.

This is not good news for homeschoolers, especially Catholic homeschoolers. Raising children is not merely a matter of keeping them alive for eighteen years, but also of teaching them, and especially of passing on one’s beliefs. It is a sacred trust.

Our laws have long recognized the fundamentally spiritual nature of child rearing and education. Homeschooling legal decisions, such as Pierce v. Society of Sisters and Wisconsin v. Yoder, have recognized this as well. Virginia, a state with a long history of strong free exercise protections, has specifically written a religious exemption into its homeschooling law.

But these protections were instituted at a time when religion was generally considered a good thing. Now religious beliefs themselves are considered to be discrimination. In the federal court decision invalidating California’s Proposition 8, Judge Vaughn Walker included this as a finding of fact: “Religious beliefs that gay and lesbian relationships are sinful or inferior to heterosexual relationships harm gays and lesbians.” In other words, if you believe that homosexual relationships are objectively morally wrong, you are harming homosexuals merely by holding that belief. (Download this document here, page 101)

It is a good thing that the RFRA was passed in 1993. It certainly could not pass today in a climate where simply holding to moral standards is judged as unlawful discrimination.

In the face of all this, we can only continue to enunciate the truth. But more and more, it is important to speak out in love and charity. In this, Pope Francis has given us an incredible example, one which we need to follow every day. The more the laws turn against us, the greater becomes our opportunity to show our love for those who hate us.

NOTE: The Becket Fund for Religious Liberty is in the forefront of the fight for free exercise of religion in the United States. They need our prayers and material support.