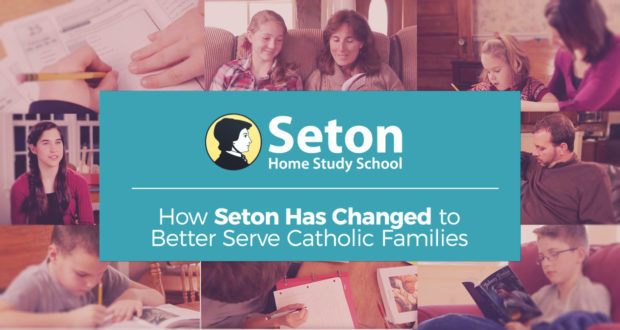 How Seton Has Changed to Better Serve Catholic Families

Today, there are over 13,000 enrolled students, an additional 25,000 students who use Seton materials, and a total of about 50,000 students using Seton Testing Services.

Seton has grown and dramatically changed over the years, but always with an eye toward meeting the needs of more and more Catholic families.

In the 1980’s, Catholic parents, who were faithfully trying to pass on the Catholic Faith to their children, faced a very frustrating situation.

As the moral standards of society at large continued to decline, public schools became more and more toxic to a solid Catholic upbringing. Additionally, Catholic schools began closing at an alarming rate.

From 1965 to 1985, the number of Catholic elementary schools in the United States dropped more than 27%.

In the 1970s and 1980s, many families banded together to form small parent-run schools, where they could have more influence over what was being taught to their children.

One such school was started in Northern Virginia in 1975 by Anne Carroll, the wife of Christendom College founder, Dr. Warren Carroll.

Seton School prospered, but it was able to serve only the families who lived close by. Many other families heard of Anne Carroll’s good work and wanted a Seton education for their children as well.

Some parents even sent their high school age children to live with host families in Virginia throughout the school year; however, this was obviously impractical for many families. To serve a larger community, Seton School needed to expand.

Answering the need to provide a Seton education without making students physically relocate to Virginia, Seton Home Study School was born in 1982, under the direction of Anne Carroll.
In the beginning, enrollment was very small, and the homeschool office was a single room.

When enrollment in the home study division became larger than the enrollment in the physical school, Anne Carroll realized that not only did homeschooling have huge potential, but running Seton Home Study School would be a huge task.

Buying up available copies of solid Catholic textbooks, and spiral-binding some photocopied texts of out-of-print books, for the first ten years or so, Seton was able only to rent out school books. At the end of the year, families were required to send back not only all the lesson plans, but nearly all of the books as well.

However, it was not long before Seton began producing its own books. At first, Seton made books available only to enrolled families, but it quickly became obvious that to serve the greater community of Catholic families, Seton needed to expand by offering books outside of enrollment.

The answer to the desire of parents to purchase Seton books was Seton Educational Media (SEM). The first SEM catalog was printed and mailed out in the summer of 1993. The catalog was 32 pages long and printed on the most economical paper Seton could find.

It turned out that selling our books to families not only helped the families, but was also good for Seton. Because we were selling so many books, we could have larger print runs—in the thousands rather than in the hundreds—which allowed us to improve quality and reduce prices.

Over the years, Seton Educational Media has grown from a small mail-order business to a very large internet-based business, selling hundreds of thousands of books and other educational and religious items every year.

The goal of Seton has always been to serve as many Catholic families as possible. Early on, one of the difficulties we ran into was that some families wanted to enroll but were not sure how to proceed in teaching children with learning disabilities.

We did not want parents of children with learning disabilities to feel that the local public school was their only option, so Seton needed to expand its services to help these families.

We have had several different learning disability specialists over the years, but the department has been helmed for the last decade by Stephen Costanzo. Each year, the Learning Disabilities department counsels hundreds of parents, and provides individualized materials to over 350 students.

From very early on, Seton Home Study School had furnished standardized tests to families. These tests were used both for purposes of placement at the beginning of the year, and also to measure progress at the end of the year.

Testing services were provided at first only for enrolled students, but in order to serve the wider homeschooling community, Seton’s testing work expanded to become Seton Testing Services, which provides tests to tens of thousands of homeschoolers every year.

Seton Testing started out with only the California Achievement Test (which we still offer for some grades), but has now expanded into several different tests, including the Terra Nova and the Iowa Test. Recently, Seton Testing Services has expanded into online testing, which will likely be the direction that testing moves in the years to come.

What Will the Future Bring?

Seton has grown and changed over the years, but one thing has remained constant—our desire to serve Catholic families. Each new area of growth has expanded the number of families we serve.

As we move forward to provide even more services—such as online high school courses—we fully expect to keep and grow this commitment.

What new or expanded educational services could your family use?

Let us know, and you might be helping Seton to write the next chapter of our history!