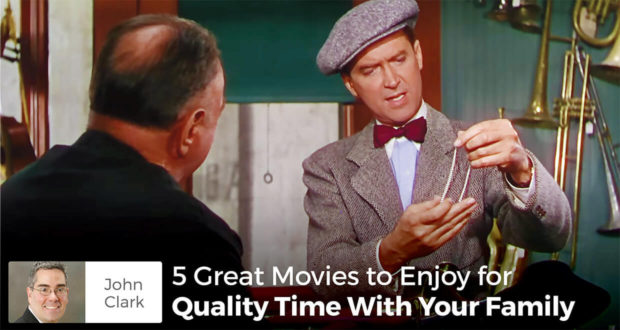 5 Great Movies to Enjoy for Quality Time With Your Family

John Clark looks back at five movies he watched again and again with his family while growing up, reflecting on what makes family movie night so memorable. This article originally appeared.

When I was growing up, on the nights that the Clark family wasn’t playing Pinochle or Whist, or watching Browns, Reds, or Indians games, we watched movies.

We didn’t watch a lot of movies; rather, we watched some movies a lot. Though I couldn’t have explained it as a child, I came to realize that movies are pedagogic—at their best, they highlight and illustrate important truths.

Looking back, I also realize the value of watching movies together as a family. Both the movie itself, along with the joy of watching the movie with someone, can have an enduring effect.

It’s been over thirty years since my six brothers and I watched these movies together with my parents, but we quote them to each other as though we saw them yesterday. Here are five that stand out. (Apologies to my dad for not including anything with John Wayne.)

Jimmy Stewart’s signature movie will always be It’s A Wonderful Life; that is perhaps how it should be. But the downside of this is that it can overshadow his other great movies such as The Glenn Miller Story.

The movie chronicles the life of the famous musician, who struggled for years to write and conduct great Big Band music. Glenn was always convinced that there was a certain “sound” that he wanted to accomplish in his music, and he would never give up on finding it.

Alongside him in this quest is his wife who won’t let Glenn give up on finding that sound, or on himself, either. At its heart, it’s a love story, as we see how Glenn loved his family, his country, and his music.

My love of this movie was largely shaped by my dad. My dad played professional trombone in an orchestra and was also a songwriter and arranger, and explained the technical parts to me when I first watched the film.

He explained to me what “the sound” actually was. In Glenn Miller, I also see my own father, whose love of his wife and love of his music have always been not only complementary, but inseparable.

Helen Miller: “Well, there’s no maybe about it, Mr. Schribman. That’s it! That’s the sound!”

If the Western Canon can be thought to spill over into cinema, here’s a deserving entry. Almost the entire movie takes place inside a jury room where twelve men decide the fate of a young man on trial for murder.

On the first ballot, eleven of them vote guilty, but one man (played by Henry Fonda) isn’t so sure. He has the courage to stand alone and vote “Not Guilty.”

Ranging from indifferent to angry, each of the twelve men argue the facts of the case as they see them. As the drama unfolds, each man learns a little more about why there might be more to this case than first suspected.

Before the final verdict is reached, the jurors also discover much more about themselves, which proves for some to be an unpleasant oracle of truth. They come to realize that in that most important courtroom of conscience, it is they who are on trial.

I talked about great movies being pedagogic, and in that regard, 12 Angry Men delivers on many levels in ways both clear and subtle. When asked for their favorite scene or exchange, ten people might provide ten different answers.

Or they might provide a hundred. When E.G. Marshall, perhaps the most logical of the twelve, finally sees—and accepts—a revelation that he had not considered previously, I still get a lump in my throat.

Most of all, 12 Angry Men urges and begs the viewer to put aside his biases to find the truth; it also illustrates that mercy and justice are easier to reconcile than we might think. I still watch it every year as a reminder of that truth.

Juror 8: “I’d like to ask you something. You don’t believe the boy’s story. How come you believe the woman’s? She’s one of them too, isn’t she?”

Thirty-four-year-old Marty Pilletti has reached a stage in his life at which he has all but given up on finding a girl to marry. We viewers are introduced to Marty on a night on which that is about to change.

Marty isn’t a perfect character; if he were, the movie’s message would be betrayed. Yet he is humble, compassionate, and generous in a world of prideful and spiteful people who are in it for their own enjoyment, even if that means hurting others.

We learn that Marty’s circle of friends is his biggest problem, although the viewer sees that before Marty does. That said, the exchanges with and among his friends provide for some hilarious dialogue.

In a particularly funny scene, one of Marty’s friends expresses his profound admiration for the philosophy of manhood, women, and life contained in Mickey Spillane’s trashy novels. He drones on and on explaining how every woman in Spillane’s novels “throws a pass” at Spillane’s hero, to which his friend concludes: “Boy, that Mickey Spillane. He could really write!”

Of the five movies listed here, this one is the most overtly Catholic. The Catholic Faith is not only a central theme, but plays a role in nearly every scene.

From the Golden Age of Hollywood, this one still glistens. Starring Errol Flynn and Olivia de Havilland, with music by Erich Wolfgang Korngold—that’s what’s called an embarrassment of riches.

Though the movie was filmed eighty years ago, the wave of colors that splashes across the screen makes it look as though the director had finally escaped the cave of monochromatic black and white to see just how beautiful colors could appear on the movie wall with the new Technicolor process.

But as stunning as the cinematography was, the screenplay was equally impressive, and immediately quotable to movie buffs four generations later.

Sometimes on Saturday nights in the 1980s, one of us would pop the movie in the VCR, saying that we would “just watch it for a few minutes,” which was never just a few minutes. Before you knew it, the whole family had gathered once again to watch this masterpiece.

My heroes may not have always been cowboys, but from the moment I hear that wonderful opening theme until the closing panorama of Wyoming, they are.

Prior to Hollywood’s current morbid fascination and frightful insistence on anti-heroes, movies like this were sometimes produced, but rarely as good as Shane. This is the story of a friendship between a man who desperately needs to be part of a family and another man who is desperately trying to save his own. It’s also about love, heroism, sacrifice, and the importance of home.

And as I watch it over the years, I realize how much Shane is about fatherhood and how and why fathers must be heroes to their children.

Shane: “You bought me a drink the last time I was in here. Now I want to buy you one.”
Bad guy: “You ain’t gonna drink that in here.”
Shane: “You guessed it.”

One of the most difficult decisions that Catholic parents make is what movies and shows to allow their children to watch. And as with all movies, parents should investigate these five movies first to determine suitability for their own children.

But I believe that there is a value to watching the truly good and great movies as a family.

As I discovered, movie night can be quality time for families.