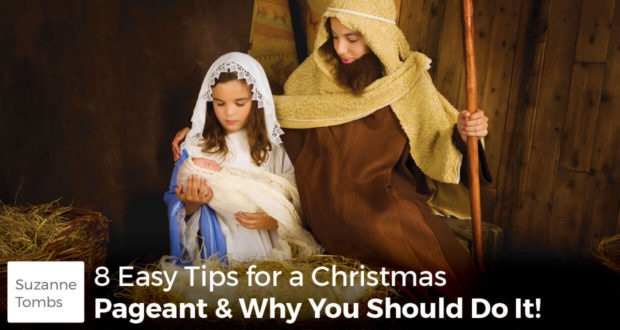 8 Easy Tips for a Christmas Pageant & Why You Should Do It!

If a Christmas pageant seems like a time-consuming extra in an already busy December, Suzanne Tombs offers eight simple steps to make it happen this year.

If there is one time of year that is decidedly busier than all others, it must be December.

And if one person has more than enough to do on even the average day, it must be the homeschool mom.

So, why on earth should a sane homeschool mom add a Christmas pageant to the agenda in December?

Because it can change your advent.

Not that we were thinking about advent on that day in August, on the beach, as our clan of homeschool friends were planning for the upcoming school year. Field trips, holy day celebrations and art projects were debated in the balmy sunshine.

“Okay ladies, I have a request,” I blurted out to the moms. “Homeschooling is great, but one thing I miss from the traditional school year is the Christmas Pageant. Can we please have a pageant?”

“Absolutely!” It was unanimous and enthusiastic.

We envisioned our children adorably dressed up as angels, shepherds and innkeepers, acting out the Christmas story.

I think none of us anticipated what a profound spiritual journey was to come.

2. Putting Ourselves in Their Sandals

As the weeks of late November and early December rolled along, we coached the children through the scenes of the pageant during weekly rehearsals.

While we worked at simple staging and learning lines, however, we brushed up against some profound truths: Mary, Joseph, the shepherds, and the Magi were all regular people. They had real emotions and worries, and yet they all did extraordinary things in response to God’s plan.

Diane, our director (blessed with the gift of infinite patience), prompted our cast to think about Mary’s response to the angel’s announcement. “Can you imagine how Mary felt just then?”
“Afraid.” “Overjoyed.” “Surprised.” “Humbled.”

The children had plenty of ideas about Mary’s state of mind when she accepted God’s plan. Our Mary smiled and gave Gabriel a big thumbs up (though I believe that did not make the final cut in our performance.)

We coached our Joseph, too. He was in a difficult position being law-abiding and just, but not wanting to leave Mary in a lurch. We felt for poor Joseph as we went over his scene. Our actor paced stressfully back and forth, trying to decide what to do. His relief was palpable when the angel assured him it would be okay.

“How would you feel if an angel appeared to you right now?” one of the moms asked our wiggling and giggling shepherds. “What would you say? What would you do?” She helped the children grasp the enormity of the situation; what a shock it was.

They must have been shaking in their sandals! No wonder the angel told them not to be afraid. This took some imagination, as our sweet freckled angel was nowhere near intimidating, but we eventually got the vibe just right.

Then there were the Magi. Diane had to reel in our kings, who were a little too energetic. “It’s a long journey, guys. You’ve been walking for miles and miles. It’s taken months, and you are really tired.

And you only have a star to show you where to go.” Our kings slowed the pace and started trudging. They even worried for a moment they might be lost. Boy, were our kings happy to finally reach Bethlehem!

And so, week by week, our homeschool group got to be part of the nativity story both actively and personally. Reading the Gospels or listening to the familiar narrative might become a passive experience; we’ve heard the story many times, so we know how it turns out.

However, challenging the cast (and the crew of moms, too!) to imagine and emulate the reactions and emotions of the Holy Family, shepherds, and Magi brought the experience to life for each of us.

I will confess, there were a few (okay, more than a few) days when I worried that pageant practice was taking precious time away from the other demands of December. On the day of our performance, however, I realized something.

We were blessed to perform our pageant for the parish’s senior citizen group.

After the performance, one lovely senior lady approached me and, wiping a tear from her eye, said, “Seeing these children perform the play filled me with a true Christmas spirit!”

I had to agree. Pondering the details of the Nativity through our pageant had filled me spiritually, too.

3. Inspired to put on your own pageant? Some quick how-to’s:

Embracing an active participation in Our Savior’s birth can profoundly change your perspective!

Suzanne is a wife, mother of four, jack of all trades and master of cookies. Homeschooling with Seton has been a blessing and an education for the whole family, not just the "students!"
2016-12-17
Contributing Writers