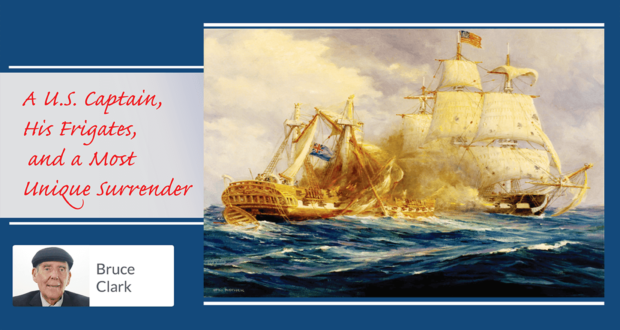 A U.S. Captain, His Frigates, and a Most Unique Surrender

A most unusual wager was made before the famous ship-to-ship battle in America’s War of 1812. Its outcome revealed the true character of an honorable man.

In 1794, the US Congress approved the construction of six frigates, small easy-to-maneuver ships, to parry the thrusts of the Barbary Pirates.

Three big frigates were built, one named Constitution. Each was armed with 44 cannons. The main battery shot 24-pound cannon balls.

Sometimes these cannons were loaded with a canister of 150 musket-sized balls on top of a solid cannonball. In any close action between enemy ships, the canister charges spread out like a kite in flight. That many pieces of shrapnel descending upon the enemy seamen were lethal.

Crews of the powerful, easily-maneuverable American frigates consisted of 450 officers and seamen. The average cost of these frigates was $200,000.

The last of these six frigates was launched during the 1798-1800 “quasi” war, which was an undeclared war between the United States and France and which resulted from disagreements over treaties and America’s neutral nation status. Fought entirely at sea, this “war” was a definite success, a surprise for the untrained and untried US Navy seamen.

Many French warships and privateers were captured, and only one American ship was lost. When the Treaty of Mortefontaine brought the war to an end in 1800, America’s navy had gained a great deal of experience, knowledge, and trained seamen to man their ships.

However, in the American War for Independence, the American fleet was generally no match for the mighty British Royal Navy. After the sea battles with France, however, the U.S. Navy had the most powerful frigates of that time.

One night over dinner, the two captains were discussing the relative merits of their ships. “My Guerriere is swift and as sleek as a hound, and quick to answer her helm,” declared British Captain Dacres. “If our two ships ever meet in battle, I’ll wager a hundred [British] pounds that you will strike your colors,” meaning the American captain would surrender.

“It is my fervent hope,” the American Captain Hull responded, “that such a battle will never take place; but if it does, I believe the Constitution will be victorious.”

“So we have a wager!” Captain Dacres concluded.

“No,” Captain Hull replied. “I will not wager a hundred pounds, but I will wager a hat.”

And it came to pass that on August 19, 1812, the two ships did meet in deadly combat. When the final cannons had boomed and the last wisp of smoke had disappeared, it was the Guerriere that struck her colors in surrender. Later, when the two captains met aboard, the British captain offered his sword to Hull as a symbol of surrender.

“No, James,” said Hull to his old friend. “I will not accept your sword, but I will trouble you for your hat.”