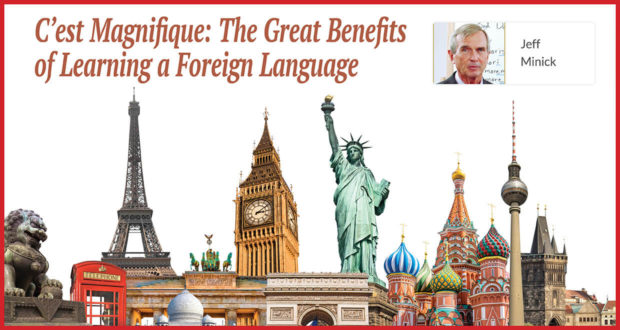 C’est Magnifique: The Great Benefits of Learning a Foreign Language

By learning a foreign language we become more aware of a country’s history, literature, art, and popular culture and able to connect with more people.

Several years ago, when I spent some time in Rome, I asked the concierge whether there was an institution close to the hotel that taught Italian to foreigners. She gave me the information, then added, “But why would you want to learn Italian? Nearly everybody here speaks English.”

She was on target. The British Empire helped spread the use of English to foreign shores, and since World War II, with the emergence of the United States as a world power, English has become the world’s universal language. In addition, technology offers more and more devices that can immediately translate non-English texts and the spoken word into English.

English-speaking students may wonder, why do I need to study a foreign language? What’s the point of spending several years learning something I may never use?

In Latin, for example, declensions and conjugations act as a toolbox for building our skills in other languages. Several Latin students in the classes I once taught to homeschoolers later told me that the French or Spanish classes in which they enrolled in college were made much easier by their knowledge of lingua Latina. They were no longer tadpoles in the rivers and lakes of foreign languages.

And some people continue to supplement this structure of the language they’ve built. Saint John Paul II was a polyglot, speaking at least eight languages fluently, including English, Polish, and German, and of course, Latin. While some of us may be gifted in our linguistic repertoire, it’s also true, as my students and John Paul II both discovered, that learning one language other than our own makes it easier to add to that stock.

A Playground of the Mind

Evidence also suggests that learning a foreign language can hone our intelligence. The online article “10 Benefits of Learning a Second Language” reports that “people who speak more than one language have improved memory, problem-solving and critical-thinking skills, enhanced concentration, ability to multitask, and better listening skills.” They also “display signs of greater creativity and flexibility.”

The same case can be made for higher mathematics. Both these subjects exercise the mind in ways that differ from the study of English literature or history. Their complexity acts as a gymnasium for the brain.

College and the Workplace

Most four-year colleges require a minimum of two years of a foreign language for admission. So if you’re planning to attend one of these institutions, you’ll need credits in French, Spanish, German, Latin, or some other language.

And while enrolled in the university, you might consider continuing your language education. To speak Spanish in the United States is clearly an advantage, and large corporations often look for job candidates who have tucked some foreign language into their résumé.

Moreover, if your university offers overseas study, you have an incredible opportunity to enhance your skills in this department. And if you’re interested in Spanish, you can often find plenty of native speakers in your backyard.

Sometimes there are unforeseen gifts as well. Recently I met an American woman via email who graduated from college with a degree in computer science. Wanting to investigate her Italian family tree before joining the workforce, she took lessons in that language in America and Florence and headed to Sicily to look up her uncles and aunts. Today she lives in Tuscany, is married to a native of that country with whom she has three sons, and operates a successful tour company for visitors to Italy

The Keys to Success

The language programs in our schools, the resources available via the Internet, and access to travel make learning a second language easier than ever.  The keys to success in this venture are motivation and perseverance.

When I was in a military school for my first 18 months of college, I studied Russian. Less than a year after leaving that classroom, all I could say in Russian was “Hello,” ”Good-bye,” “Comrade,” “I love you,” and “I surrender.” Oh yes, and the first two lines of “Silent Night.”

Meanwhile, in graduate school, I faced a situation where I had to pass a basic reading test in French. Without describing the circumstances, suffice it to say I became desperate enough to study

French for 10 to 11 hours daily for three weeks and passed the test with flying colors.

I was definitely motivated.

Citizens of the World

Finally, by tackling a language, we usually become more aware of the country’s history, literature, art, and popular culture whose language we are working to acquire. If we’re learning French, for example, we may learn more about Paris, French cooking and music, the paintings of the Impressionists, and current politics.

Think about it. One of the main ways we connect with those around us is through language.

When we add another language to our store of skills, we’ve expanded our ability to connect with more people.