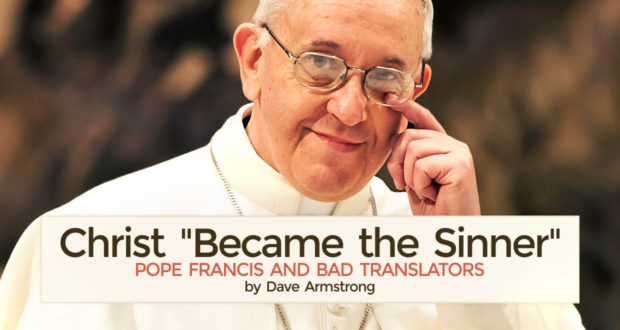 The process of Pope Francis being misunderstood is so common it could easily keep me busy day and night as an apologist. I wrote a book about it and compiled a large collection of links to articles that debunk numerous false charges. I think he is almost always a victim in these matters, based on a number of factors beyond the purview of this article.

I’d like to present one astounding example of the pope being subjected to terrible English translation even from within the Vatican. I don’t know why or how this happens (nor do I care to know), but it clearly did in this case, so that the Holy Father was unjustly blamed and accused in certain cynical Catholic quarters of being a heretic for something he never said.

For our sake he made him to be sin who knew no sin, so that in him we might become the righteousness of God.

Galatians 3:13 Christ redeemed us from the curse of the law, having become a curse for us — for it is written, “Cursed be every one who hangs on a tree”.

Isaiah 53:6 the LORD has laid on him the iniquity of us all.

1 Peter 2:24 He himself bore our sins in his body on the tree, that we might die to sin and live to righteousness.

As the Lamb of God, in biblical analogical thinking, Jesus was completely innocent (just as a lamb is), but took the punishment on Himself, to die for us and redeem us.

The Holy Father’s critics in this instance have pounced upon his phrases (from an article on the News.va/Official Vatican Network website): “He became the sinner for us” and later “become the sinner for us.” This, they claimed, goes beyond the traditional biblical, Catholic terminology (seen above). And they argued that it entailed some heretical elements, whereby Christ actually became a sinner and partook of, or entered into sin.

As always, I gave the pope the benefit of the doubt (very unlike his numerous strong critics), and casually assumed that he knows his theology. These critics apparently think that the pope is ignorant of the basic Catholic theology of salvation, whereas I maintain that this is utterly implausible and absurd on its face.

In my effort to defend the Holy Father, I had, however, momentarily forgotten that, so often, the translations we get out of the Vatican are (to be kind) less than ideal. I had presupposed for the sake of argument that I was working with an accurate translation, but then started wondering if that was the problem in the first place.

Out of curiosity, I took the offending phrases from the Italian version of the “controversial” part of the homily and utilized three online translators. I also consulted with an Italian Facebook friend of mine, Greta Villani (my italics added throughout):

With this bit of information, the alarmist criticism collapsed, and even the person with whom I was primarily disputing, begrudgingly conceded as much. The pope in fact echoed closely – if not identically – the biblical language, and it was yet another tempest in a teapot, much ado about nothing; entirely a “false alarm.”

The pope wasn’t heterodox, nor was he imprecise in language. The Vatican translator was the one who was (inexplicably) sloppy, leading to needless and scandalous suspicions of heresy.

I had to spend an entire day as an apologist dealing with this non-issue. But that’s okay: I’m always happy to defend the Holy Father.

Editor’s Note: If you liked Dave’s take on “Bad Translators” you’ll want to check out John Clark’s article, What If Pope Francis’ Translators Translated Other Stuff In History?