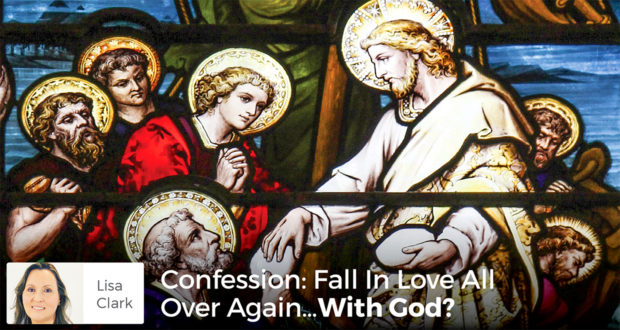 Confession: Fall In Love All Over Again…With God?

Lisa Clark isn’t usually nervous going to Confession. This time, she almost quit. Afterward, she learned something new about herself and ‘happy endings’.

Wouldn’t it be great if you could bottle that feeling you get when you first fall in love?

Wouldn’t it be great if you could save it for those times when you need it most?

One morning last year after weekday Mass, my parish priest went into the confessional to offer absolution to penitents.

Though I had recently gone to Confession, two things spurred me on; first, it was one of those rare occasions in which I had come to Mass by myself, which meant that none of my children had to wait for me to go to Confession, and second, the line was short. So I decided to avail myself of the grace of the Father of Mercies.

I planned on making it brief in case the priest thought I was being excessive. As I waited in line, a funny thing happened: I got really nervous. This is rare for me; perhaps due to a special grace, I’m not the kind of person who gets nervous for Confession. Usually. So when I felt a twinge of nervousness run through me, it caught me off guard.

Doubts ran through my head:

Maybe I am being overly pious?
It’s only been a week since my last Confession. Do I really need to go again?

As the line progressed, I found myself standing under a stained glass window of St. Joan of Arc—one of the bravest souls in history. I asked St. Joan for her help to be brave.

And my prayer was answered.

The anxiety disappeared and was replaced by the feeling that mercy awaited me, and the knowledge that love, indeed, overcomes fear.

With my newfound strength, I went in and made my Confession.

Saying my penance afterwards, I wondered what I had been so anxious about. Driving home, I was in awe of the sounds, the sights, and the fragrances of Creation, coming in the form of the melodious singing of the birds, the bright morning sun, and the smell of the honeysuckle. All the wonders of God’s handiwork were enhanced by the inner peace and joy that I was experiencing.

Yes it was a feeling of peace or serenity, or the lightness of heart when a weight has been lifted; but more than that, it was an elated, happy feeling that is best described as that youthful feeling you have when you first fall in love. And better still, when you know—as sure as the sun rises in the morning—that your love is reciprocated.

And I wished that the whole world could feel that same way.

When I returned home that morning, life was the same; things hadn’t changed. But I had changed. My attitude was different. I was behaving less like an evil stepmother and more like a fairy godmother. Of course, the love of God—the closeness of God—is not the stuff of fairy tales. It is as real as real gets. It is the real presence of the mercy of God.

To you Catholic moms who are reading this, I convey my little “Confessions of Lisa Clark” story to you for the following reason. With the responsibilities of motherhood, it is easy to neglect your own spiritual care.

You are blessed with the duties of wife and mother, but you cannot forget that you have a duty to yourself to foster a personal relationship with God. You need this relationship because every other relationship on earth will be the fruit of that one.

You are beautiful and very much loved by God.

For the past year, I have more often than not gone to weekly Confession. I have felt that joy. Yes, problems arise; but like my Savior, so do I. I rise to meet them.

And that feeling is better than any fairy tale. And it can be yours too.

Living “happily ever after” can start today.

Lisa Clark is a graduate of Christendom College with a degree in English Literature. She is the wife of John Clark and the mother of nine children. She has home-schooled her children for twenty years. Her hobbies include watching Jane Austen movies, drinking coffee, trying to give up drinking coffee, praying, grading papers, and searching for her misplaced cell phone.
augustine cardinal newman chesterton clark conversions fanatic lisa lisa-clark love mind person sane truth 2016-06-18
Contributing Writers