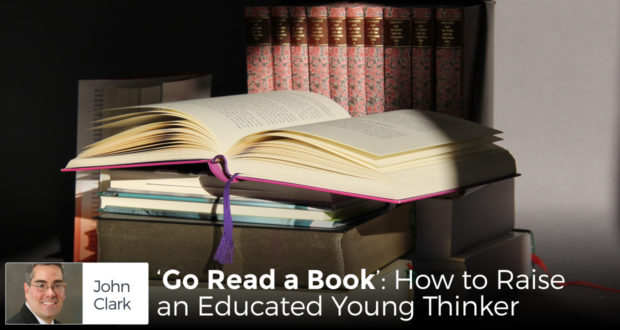 ‘Go Read a Book’: How to Raise an Educated Young Thinker

When he was bored, John Clark’s mother said ‘read a book’. Now, he’s amazed at how that little adage has transformed western culture, and we need it back.

When I was growing up, in an era in which a “tablet” referred to a piece of stone rather than a little glowing handheld television, I often complained to my mom: “I’m bored.”

Little did I know that all the members of my mother’s generation had apparently held a meeting of the increasingly popular Jeckyl Island/Bretton Woods/Oosterbeek secretive fashion, in which a response to this objection was universally mandated.

That response: “Go read a book.”

For many kids, that response often preceded a trip to the library; for me, it necessitated no such excursion. My mother had her own library.

The readers of this column are probably aware that the “Dr.” in Dr. Mary Kay Clark refers to education. But a lesser-known fact is that she also has a degree in library science. And that degree comprises a lot of her character. In fact, she is the only person I’ve ever known for whom the Dewey decimal system is a moral issue.

Perhaps all that time in the library—all that time honing the science of library-ing—wound up by putting many, many books in our family home. We were surrounded by them.

Looking back, I guess my father was faced with several options: trip over stacks of books, politely ask his wife to limit herself to a mere four thousand volumes, or build bookshelves.

My father chose the last option. I still remember helping my Dad build these, and if the word “helping” can be used in a pejorative, accusatory way, that’s how I mean it.

The most productive thing I did was hand my dad nails or open the door to relieve some of the fumes from the wood stain. Nonetheless, when those bookcases were built, I took a little pride that I had been part of the process.

The new bookcases were filled as soon as the varnish dried. And while the bookcases may have been viewed as ornamental, the books were not. We were expected to read them. In fact, we read competitively, and here’s how that worked.

One of my brothers might have read something, then discussed it with my Dad, who had already read it. If you wanted to be part of the conversation, you’d have had to read the book too, or at least enough of it to take part in the discussion.

The impetus to read books also played out in other ways. Every so often, I would mention to my Mom that I had never read a certain book or play, like Pride and Prejudice or Hamlet, to which my mother would respond: “Don’t tell anyone that. Educated people have read that.” There must be five hundred books on the educated-people-have-read-that list.

Looking back, if their goal was to raise educated children, being enveloped by books worked. It’s a trend that we have continued into adulthood. Today, I have my own library. All of my brothers do.

A few years ago, my brother was moving to another city and asked if he could store some books at my office. After I agreed, he proceeded to bring over box after box of books: legal tomes, biographies, books of essays, famous speeches, and lots in between. I shouldn’t have expected anything less.

A funny thing happened when they got there: I read them. Of course, I didn’t read all of them; but I did read enough to open some more literary doors. We all grew up with a respect for the printed word that has continued to this day.

There was a time in America during which what I have just related would have been terribly common. But the sad fact is that people do not read the classic works of fiction or nonfiction or biographies any longer.

Without it, our chances to think clearly are remote. The commodity of clear thinking has been in a bear market for decades. We parents need to be part of a new bull market in meaningful education.

So, homeschooling parents, fill your home with great books.

I know a guy who can help you build the shelves.