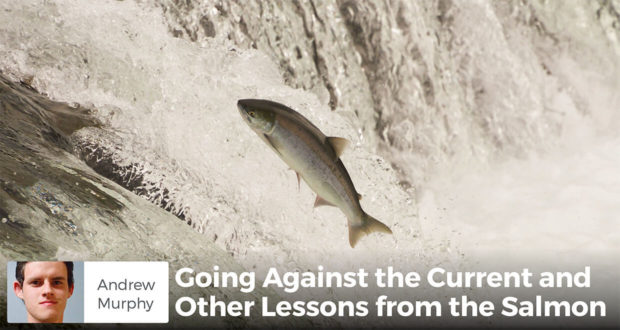 Going Against the Current and Other Lessons from the Salmon

When right is wrong and wrong is right, Andrew Murphy shows what the salmon can teach us about swimming against the current and living the Catholic Faith.

If I asked you to pick an animal with a “characteristic” that you would like to imitate, which animal would you choose?

An owl for its wisdom? A bear for its strength? A lion for its bravery?

Whether owls are really wise, or lions capable of courageous acts, is another matter entirely. As I have not had the great fortune to find my way into Narnia through my wardrobe (not that I never tried), I have not had the opportunity to ask them.

Whichever animal you chose as a worthy role model, it probably was not a salmon. Now I know this fish is not particularly inspiring when it is cut up on your plate and served with veggies, but the live version is quite a different matter. When they are swimming around in the water, flapping their fins and wriggling their scaly bodies, these humble fish are capable of teaching us a very important lesson.

G. K. Chesterton, one of my favourite writers (along with J. R. R. Tolkien and C. S. Lewis), in his book The Everlasting Man, wrote, “A dead thing can go with the stream, but only a living thing can go against it.” Salmon give us a brilliant illustration of this idea, though I doubt Chesterton had them in mind when he wrote it.

These fish begin their lives in rivers or streams; after a time they make their way downstream to the ocean where they feed on other fish and grow much larger in size. Then, when they have reached adulthood, they undertake an amazing journey, swimming back upstream to spawn.

So how can we imitate salmon? There are many trends and fashions today which are contrary to the Faith, and if we are not careful we might succumb to them and be swept along in the stream of the world.

For after all, it is easy to go along with what everyone else is doing and encouraging us to do. It is easy to go with the flow, to fit in. It is much harder to go against it and stand out. Yet in many cases, this is what we as Catholics are called to do.

Where does homeschooling come into all this? Homeschooling is probably the most ideal setting for children to learn how to be “Catholic salmon,” prepared to hold to their beliefs and go against the stream when necessary.

In a regular school (even a Catholic one), the influence and ideas of the world are often present in the classroom; if these ideas are not actually taught, they are likely spoken about and encouraged by other students. On the other hand, homeschooling allows the parents to be in charge of the education and monitoring what parts of the world are allowed in.

This provides a safe environment where the children can learn about their Faith and be properly prepared to face the world. Going out into the world without such training would be like sending a soldier off to battle without showing him how to use a gun.

This training need not be a wholly negative experience. Instead of simply going against “bad” trends, we should try to set good ones for other people to follow. As it is often said, actions speak louder than words. Instead of simply complaining that such and such a movie, book, or song is immoral, why not try to create some good versions of your own, if you have talents or interests in any of these areas?

Living the Catholic Faith often means going against the flow of the world. We are sure to face opposition, and perhaps even wonder if the struggle is worth it. At such times we need to remember that nothing that is really worth doing is ever easy. We would do well to also remember these words of Our Lord, “Blessed are you when men revile you and persecute you and utter all kinds of evil against you falsely on my account. Rejoice and be glad, for your reward is great in heaven.” For, “In the world you have tribulation; but be of good cheer, I have overcome the world.” [Matt 5:11-12, John 16:33]

Andrew graduated from High School with Seton in 2014 . He is the eldest of five children with a brother and three sisters. Some of his interests include reading, (especially Chesterton, Tolkien & C. S. Lewis), film making, bush walking/camping and writing – some which may be found on his blog; Thoughts for the Journey Thoughts For the Journey.He is also working on a short work of fiction (in the style of Tolkien's The Hobbit) which he hopes to publish by the end of the year.
andrew andrew murphy belief catholic faith living the faith murphy salmon upstream 2016-10-23
Contributing Writers