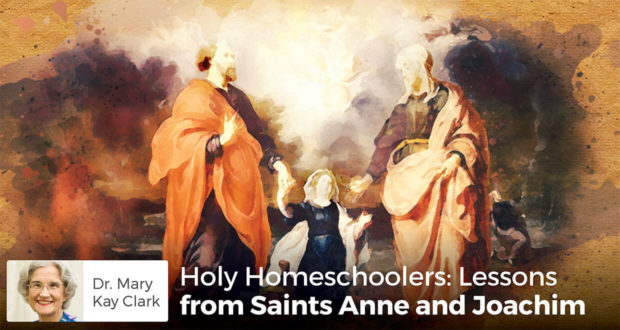 On the Blessed Mother’s birthday, we can look to her parents, Sts. Anne and Joachim, to find valuable lessons on teaching the children God entrusted to us.

On September 8th, we celebrate the birthday of the Blessed Virgin Mary.

It seems appropriate to ask for Mary’s help as we begin a new homeschooling year, which for many of us is a “birthday” of the beginning of our homeschooling some years past.

As we think about the Blessed Mother’s birthday, we should consider also her parents, Sts. Anne and Joachim, who were responsible for educating their Immaculate Daughter.

In The Life of Mary as Seen by the Mystics, published by TAN Books, the author compiled material from several saints about Anne and Joachim and the birth of their daughter Mary.

The Blessed Mother’s parents lived very holy lives, Joachim having regular responsibilities in the Jewish Temple in Jerusalem, and Anne living a life of daily prayer.

While they had inherited considerable land and herds of sheep, they were generous in donating one-third of their money and goods to the Temple, and one third to the poor.

Anne and Joachim lived a life of prayer, but one prayer did not seem to be answered: their prayer to have a child. Both suffered much at the hands of those in the Jewish community who believed they were being punished by God.

Mary was immaculately conceived without original sin; this truth was first explained by several mystics and later promulgated by the Catholic Church as a Doctrine of Faith.

After Mary was born, the Jewish priests came to the house of Anne and Joachim for the ceremony of naming the baby.

Joachim wrote the name Mary on a piece of parchment and placed it on her chest. The Jewish priests gave her the official name of Mary, then literally lifted her up as a gift to the Lord.

Anne and Joachim realized Mary was a miracle from God, yet they were surprised at Mary’s religious understanding.

Some mystics have believed that little Mary could speak, read, and understand the Jewish teachings even as a toddler. Totally free from sin, she was able to understand various doctrines about God at a very early age.

While Anne and Joachim taught Mary at home for the first few years, it is traditionally believed that her parents learned much from little Mary’s insights into various spiritual truths.

Evidently, the homeschooling in the home of Anne and Joachim sometimes included heavenly inspirations from little Mary!

When Mary was quite young, she asked her parents if she could go to live, learn, and pray in the Temple in Jerusalem.

At that time, many young Jewish girls served the priests, worked, and prayed in the Temple. While Anne and Joachim did not know the particulars of the future of their holy daughter who would be the Mother of the Messiah, they did believe that she belonged in the holy Temple of God where she could spend more time in prayer and meditation.

With great sacrifice and obedience to God’s Will, they agreed to their longed-for daughter joining the Temple School.

While it was a sadness for Anne and Joachim to be separated from Mary, they realized that Mary was a special child who had been given a special mission from God.

We can be confident that Anne and Joachim, holy and loving parents, visited Mary frequently at the Temple school. It seems likely that, through prayer and discussion, Anne and Joachim continued Mary’s “homeschooling,” which helped both Mary and her parents to grow in understanding spiritual mysteries.

Some of us homeschooling parents have found ourselves growing in our own spiritual lives, learning as much or more than our young innocent children who provide an example of being open to mystical truths.

May we homeschooling parents follow in the footsteps of Joachim and Anne in having a lively faith in God and His plan. May we, like them, never cease praying for His favor and His graces.

May we stay united in love for one another and for Christ, so that we can faithfully and devotedly teach our children as Joachim and Anne taught the Blessed Mother.

May all of us homeschooling parents receive a special blessing from the Blessed Virgin Mary on her birthday not only to help us to teach our children the eternal truths of the Catholic Faith, but also that our children may help us to learn, and to grow, and to practice our Catholic Faith more deeply as we teach our young ones with words, actions, prayers, and devotions.

Remember, O most gracious Virgin Mary, that never was it known that any one who fled to thy protection, implored thy help or sought thy intercession was left unaided. Inspired by this confidence, we fly unto thee, O Virgin of virgins our Mother; to thee do we come, before thee we stand, sinful and sorrowful. O Mother of the Word Incarnate, despise not our petitions, but in thy mercy hear and answer them. Amen.