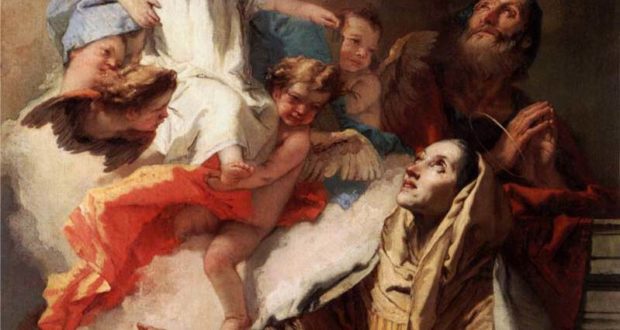 Good Saints Anne and Joachim, Pray for Us

On July 26th we celebrate the Feast of Good Saint Anne and her husband, St. Joachim, the parents of the Blessed Virgin Mary, and the grandparents of Jesus.

Frances Parkinson Keyes wrote several Catholic biographies, including a biography of St. Anne, grandmother of Our Saviour. The author did extensive research and traveling to find out the details of the life of St. Anne. Keyes writes that Anne’s parents and close friends were aware that Anne was to be the mother of the Virgin who would be the mother of the Messiah.

Both of Anne’s parents were told miraculously about the birth of Anne, and once she was born, miraculous healings were performed by Anne even as a baby. A blind man was able to see with the touch of Anne’s hands.

Good St. Anne, pray for our young children and inspire them to be such good Catholic children that those who do not have the truth of the Catholic Faith can be led by the innocence and example of our children to “see” the truth of Jesus and His Mother Mary.

Anne’s family moved near Jerusalem and placed Anne in the Temple school for her to be educated about the teachings of God and about the Ten Commandments. Her father had a prestigious position in theTemple, but Anne and her family did not live there. Her father kept a close eye on his daughter since she was his only child. He owned land in the country and when he went to oversee his pasture land and grazing sheep, little Anne went with him.

Little Anne learned Jewish history and geography. Most of all, she learned the Old Testament at school. She also learned household duties in the home. Both school and home activities involved regular times of family prayer.

Good St. Anne, help us in our homeschooling so that our domestic church provides the kind of education and good example for our children to live holy lives. Help the father of our family to realize his important role in teaching our children by word and example.

After Anne grew up, she married Joachim, a man known for his holiness. Since Anne’s father had no son, Joachim took on the responsibility of helping Anne’s father with his fairly extensive fertile lands and abundant flocks. They lived near the city walls outside Jerusalem, with flowering gardens and near the miraculous healing pool of Bethesda. They lived a quiet life since Joachim was gone all day in the fields, but they both observed the Jewish feasts faithfully. Anne was said, according to the holy books of the time, to have “a great gift of nursing the sick of both body and mind, and those in pain and distress frequently called on her for help, and were never denied.”

The one sorrow of Joachim and Anne was their childlessness. Among the Jews, having no children was considered a punishment from God. When Joachim would go to the Temple, the men would reproach him, even declaring that his gifts to the Temple were unacceptable since it was obvious that God judged him unworthy to have children. This was one reason why Joachim spent so much time in the fields and not in the city.

Good St. Anne, one of the most difficult things to endure is reproach from those who attend church with us but who do not understand our decision to teach our children at home. Help us to forgive those who offend us and speak against us; help us to remain silent while we continue to fulfill our responsibilities to our children.

Since God intended that the child of Joachim and Anne would be the Mother of God, the conception of Mary involved miracles; her birth was announced to Joachim and Anne by angels before it occurred, and the conception itself was a miracle since Anne was past her years for childbearing. An angel appeared to Joachim in the fields, and also appeared to Anne in her garden. The angel told them that they were to have a child. The angel said to Anne, “Fear not… a daughter will be born unto you, who shall be called Mary, and shall be blessed above all women.”