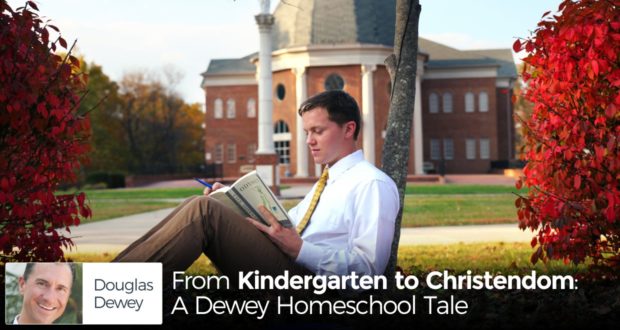 In the early 1990s, Leni and I were a young married couple recently moved from Canada to Arlington, Virginia.

At our parish, St. Agnes, there was a homeschooling family named the Hambletons. At that time, Bob and Amy had only about 7 or 8 children (on their way to 17), but it wasn’t their number that won our admiration; it was their reverence.

We soon learned that Bob and Amy had attended Christendom College. Over the years, I came to know many faculty, graduates, and students, and my early impression grew into an unassailable conviction: Christendom College was in the business of forming saints.

And as far as I could tell, they intended to take over the world that way.

I work in the health care field, managing outpatient surgery centers. I spend a lot of time in my car traveling from center to center, and it gives me time to reflect on my blessings. Leni and I have ten children: the first two are graduates of Christendom, and the next two attend the college now.

All our children are homeschooled from K to C—Kindergarten to Christendom. When everyone’s asleep and the dog isn’t howling, our home is peaceful.

In the year 2000, I was approached by the late Robert Monahan, a very active Catholic in New York and Connecticut and a much-beloved board member of the college, to serve on Christendom’s board.

It was one of the greatest honors of my life, and 15 years later, I still feel unworthy.

I knew the college was, as Pope St. John Paul II said, “doing great things for the Church,” but it wasn’t until 2008, when my eldest daughter, Frances, enrolled as a freshman, that my grasp of the importance of this college began its migration from my head to my heart.

The truth is simple: my family needs Christendom College.

Like many families, we try hard to raise our children to be Catholic, but children grow into young adults; the manageable little pack that can be gathered for a rosary in the parlor or bustled into a van for daily Mass doesn’t last.

They turn 16, 17…18. If they don’t take ownership of their faith, then all we’ve given them is a pleasant childhood. For us, Christendom College is the sure hand that receives the torch lit at home and passes it securely to our children.

But there’s more. And this took personal experience with the college to understand. Students leave Christendom with enduring friendships grounded in shared faith. Friendships that will raise each other up throughout their lives, not regress them to the mean.

And often—very often—they will find a faithful spouse. While the wider culture disdains and abandons marriage as the wellspring of civilization, Christendom is a marriage machine. It is water in the desert, a sign of contradiction.

My eldest two were among those who found their spouses at Christendom. My son- and daughter-in-law are my 11th and 12th children, both raised in faithful families, striving for the same best things. Easy to love, but hard to find.

Like everyone else, whatever money I have earned is by the grace of God. It belongs to Him and is for my prudent use for a little while.

Christendom has protected, polished, and presented “the pearl of great price” for my children’s sake. What I owe the college, I cannot pay, but I gratefully offer what I have.

There are many prudent ways for faithful servants to invest God’s talents for the upbuilding of Christ’s Kingdom.

I have already doubled my money and expect exponential returns for my support of the apostolate conceived and named for that purpose: Christendom College.

Douglas Dewey is the CEO of Murphy Healthcare Group and serves as the Vice Chairman of the Board of Directors for Christendom College.
catholic children christendom dewey douglas douglas-dewey enroll experiecence students 2016-03-23
Contributing Writers