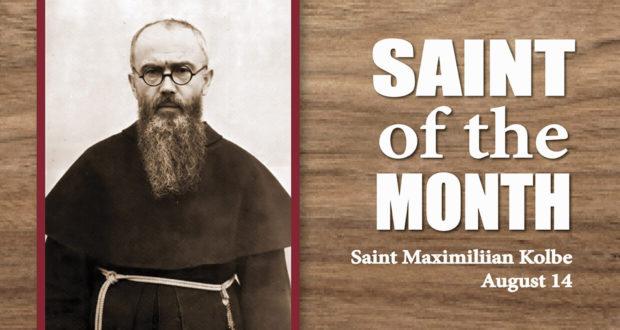 Saint Maximilian Kolbe was born on January 8, 1894, as Raymund Kolbe.

He was born in Poland, part of the Empire of Russia at that time, and was the second of four sons born to his parents. At age twelve, Raymund had a vision of the Blessed Virgin Mary.

“That night, I asked the Mother of God what was to become of me. Then she came to me holding two crowns, one white, the other red. She asked me if I was willing to accept either of these crowns. The white one meant that I should persevere in purity and the red that I should become a martyr. I said that I would accept them both”

The year following his vision, 1907, Raymund and his older brother Francis began at the minor seminary for the Conventual Franciscans in Lviv, Poland, which is now part of Ukraine. He took the religious name of Maximilian, and upon taking final vows in 1918, he added the name Mary to honor the Blessed Mother.

In October of 1917, Father Maximilian, whose devotion to the Blessed Mother was constant throughout his life, organized the Militia Immaculatae (Army of the Immaculate One) to work for the conversion of sinners and enemies of the Catholic Church, specifically the Freemasons, through the intercession of the Virgin Mary.

The Militia is still active today.

In 1918 Father started two evangelization centers in Niepokalanów, Poland, dedicated to the Immaculate Virgin and traveled to Japan and India to establish other centers. He worked with missionary zeal to draw people toward Our Lady and through her to her Son by publishing a magazine and using the most advanced technology, short wave radio.

When the Nazis invaded Poland in 1939, Father Maximilian welcomed thousands of Jewish refugees to Niepokalanów. He was arrested and released but used his magazine to criticize the Nazi regime. He was arrested again in 1941 and sent to Auschwitz concentration camp.

While interred, Father Maximilian witnessed a man sentenced to die who had a wife and children. As an ultimate sacrifice, the Franciscan offered his life in exchange for the man’s life. While the husband and father’s life was spared, the monk’s life was to be taken by starvation. After two weeks, and needing the bunker, the German soldiers injected Father Maximilian with carbolic acid, an extremely painful form of death. He offered his arm for the injection with perfect serenity.

Maximilian Kolbe died on August 14, 1941, and was cremated on August 15, the Feast of the Assumption. Pope John Paul II canonized him as a Saint and Martyr of Charity on October 10, 1982. St. Maximilian is considered a patron of journalists, families, prisoners, the pro-life movement, the chemically addicted, and those with eating disorders.

Saint Maximilian Kolbe, pray for us!

Download the free saint of the month poster designed by Emily Prause using the button below. You can pin it to your classroom wall or place it on your refrigerator to help your children learn more about Saint Maximilian Kolbe .