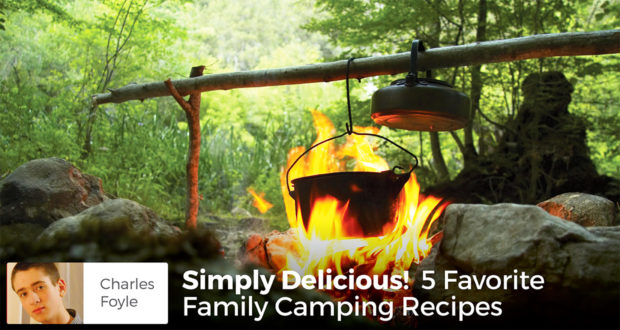 Simple, hearty meals are the best whether at home or in camp! Charles Foyle and his family have five favorite, mouth-watering recipes they use when camping.

Dad, my brother, and I end up camping several times a year, mostly up at The Farm, which is home to ninety acres of assorted trees and most of our camping memories.

Taking full advantage of flexible Seton scheduling, we hunt, trap, and do all sorts of things, thoroughly enjoying ourselves as Dad instructs us in what could be considered a variant of Physical Education.

Of course, a bad meal would dampen down the enjoyment—as it would anywhere else!

Here are five recipes for meals we especially like.

Mom has made these in the past both at home and at the camp. You can modify it easily with canned pumpkin, which adds protein.

This recipe is especially handy because it works without using fresh milk. Adios, Bisquick.

When ready to use the mix, add:

About one large baked potato per person

Directions: Quarter baked potatoes, slice them 1/8 to 1/4” thick, and salt them. Coat the bottom of a well-seasoned heavy skillet with olive oil. Heat it enough to sizzle vigorously when you drop a potato piece in, but be careful so you don’t overheat the oil.

Allow the potatoes to cook until they begin to turn brown, when you can add a healthy coating of paprika, some red cayenne pepper, and onion powder. In a bowl or tin cup, scramble your eggs and season them with salt, paprika, onion powder, red pepper, and a bit of cilantro.

Then, right when the potatoes are well-browned, make a well with your spatula and pour in the eggs, stirring until they cook.

Remove from heat when they are dry—browned eggs gather no compliments. Serve with ketchup, and it will gather compliments, as long as the eaters aren’t too busy!

This dinner is also quite versatile, and is great for meatless Fridays. Cooked with sliced leftover pork chops it serves for another day of the week.

Take your favorite cornbread batter and fry it like pancakes. Usually I use the one from the back of the House-Autry Cornmeal bag, but any cornbread recipe will do.

If you mix the dry ingredients beforehand with powdered milk, you can add water, oil, and eggs to have it ready.

For lack of a better term I am calling this section the filling. It had no name when we first came up with it, standing around the wood-burning stove wishing we had cooked something ahead of time. You will need:

Directions: Caramelize the onion slices in olive oil or butter, over medium heat in a heavy skillet. If you are using an iron skillet, make sure it is well-seasoned so the acid in the tomatoes does not take some of the seasoning off.

Drain the canned tomatoes and beans, add them to the fried onions, and simmer.

The caramelized onion juices will deglaze from the bottom of the pan and infuse their flavors into the vegetables.

When the liquids become rather thick, add the well-drained spinach. Season with oregano to taste, adding some salt. You could also use the same seasonings as in hash browns.

Heat through and serve as a topping for the cornbread, or, as I enjoy doing, put it in between two cornbread pancakes and enjoy.

Grits are good, but when they become cold and glutinous, they aren’t as appealing as they were when fresh. But anything fried is good.

Here is a trick we use to keep from welding grits to a pot trying to reheat them. You will need:

One batch of your favorite cornbread batter
Butter
Leftover grits

Directions: Before you cook the cornbread cakes, mix the grits in with them. These cook at a little higher heat than regular pancakes, as the grits have more water in them to be cooked out.

Cooking times will vary based on the ratio of grits to cornbread, but you still want to cook them rather dark, else they will be full of mush.

Most people, including us, like stewed apples. However, cooking a large potful of them uses up too many dishes for camping.

With our dishwasher permanently out of service, we needed a way to make them without sticking up the bottom of a pot.

So we figured out how to cook them one serving at a time directly on top of the stove.

Directions: The secret of it is using single-wall stainless steel cups, one per person. (Dad explained that double-wall insulated cups will explode.) Core and cut the apples, leaving the peel on if you want.

Put them in the cups with a bit of water, about a spoonful of brown sugar, a pat of butter, and cinnamon. Cook for at least ten minutes, stirring every now and then, or until they look like stewed apples.

These recipes were made without precise measuring, mostly consisting of whatever came handy cooked on some sort of fire, whether from a gas stove, a wood-burning stove, or a hole in the dirt.

Using modern appliances and measuring, you will probably have to compensate by cooking with all your senses, especially smell and taste. Much of our cooking is done mainly with proportions and ratios.

Hopefully, these five recipes will enrich your culinary experiences as much as they did ours.

Easy to prepare and clean up, the meals from this small selection of my family’s camping staples could simplify mealtimes for anyone from outdoorsmen to busy homeschooling parents.

When my family and I cook them at home and in camp, we do more than fulfill our caloric requirements.

Rather, it is a way of making mealtime memories—and getting rid of those cold grits!

If you liked these recipes, please check out these other articles from our authors:

How to Plan for Easy Dinner Times. No Mess, No Stress!

I am a member of the eleventh grade of Seton Home Study School, with my favorite subjects being English, Religion, and History. I serve Latin and English Masses and help my brother with his yard business. In my spare time I read G.K. Chesterton and his contemporaries, collect 78s, hunt, shoot, and fish, and listen to classical music. One day I would like to join the FSSP.
camp camping charles charles-foyle flexibility foyle grit cakes hashbrowns hearty meals pancakes recipes seton stewed apples 2016-05-15
Contributing Writers