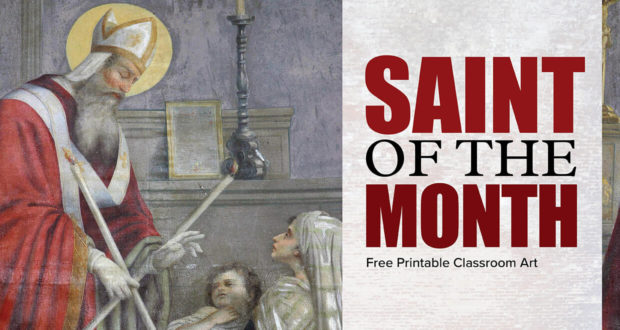 Looking for a miracle? Ask St. Blaise, a popular saint during the Middle Ages, one of the 14 Holy Helpers, and a physician known for miraculous cures.

Much of what we know of St. Blaise has been passed down through tradition and legend. What we know for sure is that he was an Armenian bishop and martyred for the Faith during the 3rd century.

The Legendary Life of St. Blaise

It has long been told that St. Blaise was of noble birth who received a Christian education. He was also a renowned physician before he became the bishop of Sebastea, Armenia. In the early days of the Church, a bishop was appointed a bit differently than how they are today. At that time, the local community nominated the bishop – based on the candidate’s holiness and leadership skills.  His consecration as a bishop depended on an examination by the other bishops and approval by the Pope.

The people of Sebastea chose St. Blaise; thus he became a “physician of souls.” He worked for both the physical and spiritual welfare of his community.

In 313, Emperor Constantine and his co-emperor/alley, Licinius, approved the Edict of Toleration, legalizing Christianity throughout the Roman Empire. However, within five years, Licinius betrayed Constantine and began persecuting the Church in his region. It wasn’t until 324 that Constantine defeated him.

In time, the local authorities started persecuting Christians, and St. Blaise spoke out against the religious freedom denied to them.

The governor, Agricolaus, ordered his arrest, forcing Blaise to flee into the wilderness. He took on the life of a prayerful hermit, with many of the wild animals coming to him for healing.

One day, hunters came upon Blaise kneeling in prayer in his cave. Wolves, lions, and bears surrounded him. They arrested him, and as they were taking him to prison, they came upon a poor old woman whose pig had been stolen by a wolf. She asked for Blaise’s assistance, and at his command, the wolf returned the pig to the woman – unharmed. It is because of this reason that St. Blaise is sometimes called the “Saint of the Wild Beast.”

Later, the woman gave St. Blaise two wax candles to brighten his gloomy prison cell. The significance of this gift of candles would figure prominently in the beneficence of St. Blaise through the ages.

Agricolaus tried multiple times to persuade St. Blaise to renounce his Faith and worship pagan idols. Though he had Blaise beaten and tortured with iron combs, Blaise refused to apostatize and in 316 was beheaded. St. Blaise is the patron saint of throat illnesses, animals, and wool trading. Blaise is often depicted either with two candles, in a cave with wild animals, or with iron combs.

St. Blaise was a very popular saint during the Middle Ages. He is even one of the 14 Holy Helpers. One reason for his popularity may have been because he was a physician known for miraculous cures. In a time when even a cough could lead to something severe or fatal, who better else to ask for intercession than St. Blaise.

A custom that many parishes still practice today is the blessing of St. Blaise. On his feast day, normally during Mass, the priest will hold two candles in a crossed position either over the heads of the Faithful or upon their throats. The priest then says, “Through the intercession of St. Blaise, bishop and martyr, may God deliver you from every disease of the throat and from every other illness.”

The origin of this blessing comes from a tale of one of St. Blaise’s miraculous cures. A mother came to him, begging for him to save her son, who had a fishbone stuck in his throat. St. Blaise blessed the child with two candles in the form of a cross, and the boy was able to cough up the bone.

Just as he cared for his community both physically and spiritually when he was alive, St. Blaise can be a “physician of souls” for us as well. The next time you invoke St. Blaise for his protection against any physical ailments of the throat, also ask for spiritual protection against ailments of the soul, such as profanity, lying, and gossip. Let our voices always bring praise to God.

St. Blaise, pray for us.

O Glorious Saint Blaise, who by thy martyrdom has left to the Church a precious witness to the faith, obtain for us the grace to preserve within ourselves this divine gift, and to defend, without human respect, both by word and example, the truth of that same faith, which is so wickedly attacked and slandered in these our times. You who miraculously cured a little child when it was at the point of death by reason of an affliction of the throat, grant us your powerful protection in like misfortunes; and, above all, obtain for us the grace of repentance, together with a faithful observance of our Church, and avoidance from offending Almighty God. Amen.

Download the free printable monthly saint page using the button below. You can pin it to your classroom wall or place it on your refrigerator to help your children learn more about Saint Blaise.