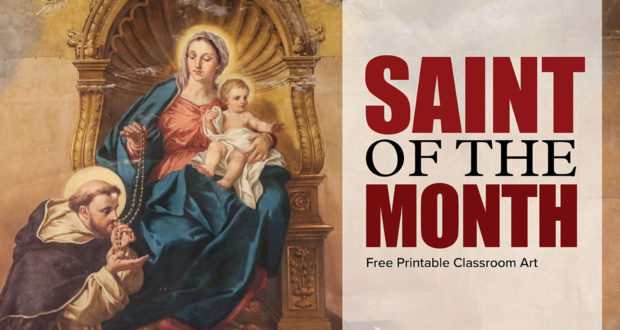 St. Dominic – Founder of the Dominicans

St. Dominic was a dogged defender of the Faith, an enthusiastic promoter of the Rosary, and founder of the Order of Preachers, also known as the Dominicans.

Saint Dominic is best known as the founder of the Dominican Order, but did you know that he and his order were instrumental in the spread of a certain Marian devotion and that he was good friends with another well-known saint?

Dominic de Guzman was born in Castile, Spain around 1170 to a nobleman, Felix de Guzman, and his wife, Blessed Joan of Aza. When he grew older, he went to live with his uncle in Palencia to continue his education, concentrating on theology and the arts. While Dominic was still a student, he joined the Canons Regular of Osma around 1194.

This was a religious community attached to the cathedral of the diocese. After a few years, he became a sub prior, or assistant to the superior, and later the prior of the chapter, the governing body of the Canon.

Dominic and the Holy Rosary

In 1203, Dominic was asked to accompany Bishop Diego d’Azevedo as a royal ambassador to Denmark. It was on this journey that he first became aware of a growing heresy in southern France spread by the Albigenses. They wrongly taught that all material things, including the human body, were evil. Many who followed this heresy went so far as to commit suicide by starvation and were glorified for it.

After they finished their task as royal ambassadors, the bishop and Dominic went to Rome where the pope sent them to southern France to preach against the Albigensian heresy. Dominic had a different style of preaching – the evangelical preaching – and taught it to his growing followers.

He was not forceful or threatening but rather persuasive in his preaching, and lived according to what he taught. He is known to have said: “Arm yourself with prayer rather than a sword; wear humility rather than fine clothes.”

At first, however, they had little success in combating this heresy. So Dominic turned to the Blessed Virgin for help. According to tradition, Mary appeared to Dominic, giving him a powerful weapon: the Holy Rosary.

She said: “Wonder not that you have obtained so little fruit by your labors; you have spent them on barren soil, not yet watered with the dew of Divine Grace. When God willed to renew the face of the earth, He began by sending down on it the fertilizing rain of the Angelic Salutation. Therefore preach my Psalter composed of 150 Angelic Salutations and 15 Our Fathers, and you will obtain an abundant harvest.”

The Angelic Salutation, the Angel Gabriel’s greeting to Mary at the Incarnation, is an early version of the Hail Mary prayer we know today. Her Psalter was split into three sets of mysteries: the Joyful Mysteries, the Sorrowful Mysteries, and the Glorious Mysteries. (The Luminous Mysteries were introduced by Pope Saint John Paul II in 2002.)

Thus armed with the rosary, Dominic traveled throughout southern France, preaching and converting many back to the Faith, while also spreading the devotion of the Holy Rosary.

The Order of Preachers

In 1206, Dominic set up his headquarters and established a convent in Prouille. Here, he was able to properly train his followers, shelter converted women, provide a sound Catholic education for children, and provide a house of prayer.

This was also around the time Dominic began to envision a new order of highly trained preachers devoted to teaching the Word of God.

Dominic went to Rome in 1215 to ask the pope for permission to found a new order. Pope Innocent III, however, recommended they adopt an existing rule to follow. Dominic decided they would follow the Rule of Saint Augustine with added constitutions. Later, the pope’s successor, Honorius III, confirmed his order in 1216. He called them “The Order of Preachers,” also known as the Dominicans.

With his order recognized by the Church, Dominic went to work. For the next few years, Dominic had his men go out to preach and to spread the new order. He set up Dominican houses near major universities in Paris and Bologna, forming a school of theology.

Even with his order rapidly growing, Dominic still continued to travel, preach, and pray for conversions.

Friendship with the Franciscans

During his time in Rome, Dominic became good friends with Cardinal Ugolino, who eventually became known as Pope Gregory IX, and Saint Francis of Assisi. Because of this friendship and their common overall goal, the Dominican and Franciscan Orders have always been very close.

It was St. Catherine of Siena who said, “Truly Dominic and Francis were two pillars of Holy Church: Francis with the poverty that was his hallmark and Dominic by his learning.”

Saint Dominic died in 1221 at about age 51. Before his death, he told his followers to “have charity among you, hold to humility, [and] keep willing poverty.” He was soon canonized by his friend, Pope Gregory IX, in 1234.

Saint Dominic’s feast day is August 8th. He is the patron saint of astronomers, falsely accused, and the Dominican Republic.

Saint Dominic, pray for us.

O holy Priest of God and glorious Patriarch, St. Dominic, thou who wast the friend, the well-beloved son, and confidant of the Queen of Heaven, and didst work so many miracles by the power of the Holy Rosary, have regard for my necessities.

On earth, you opened your heart to the miseries of your fellow men and your hands were strong to help them; now in heaven, your charity has not grown less nor has your power waned.

Pray for me to the Mother of the Rosary and to her divine Son, for I have great confidence that through your assistance I shall obtain the favor I so much desire.

Download the free printable monthly saint page using the button below. You can pin it to your classroom wall or place it on your refrigerator to help your children learn more about Saint Dominic.