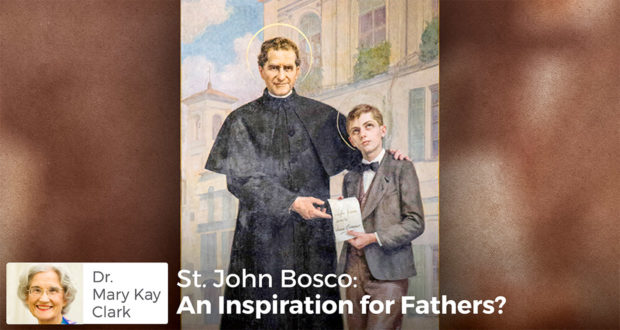 Dr. Clark shares how St. John Bosco is an amazing patron for homeschooling fathers, and we should follow his example through prayer, work, and study.

St. John Bosco is an inspiration for parents in general, and a particularly good example for fathers, who understand the value of practical training and physical work.

Though St. John Bosco lived in Italy from 1815 to 1888, he can give parents today valuable guidance on teaching children in such a way that they become and feel useful in the family and in society while simultaneously being educated in the Catholic Faith.

John Bosco was born into a very poor farm family. His father died when he was only two years old, and his mother and two older brothers struggled daily to keep the family farm going. Though none of the boys went to school, and their mother never learned to read, she had learned and memorized the catechism.

She taught the Faith to her three sons every day and kept them saying their daily prayers along with working the farm. John quickly grew to love learning about his faith, memorized the catechism, and became a pious son.

As a young boy, John was able to spend some time away from the farm with people in the nearest town. He enjoyed running and jumping, climbing trees, and playing various physical games and tricks with the local boys.

Whenever there were any performers or entertainers in town, he would learn the methods of acrobats, dancers, jugglers, and magicians. Soon he was so “entertaining” himself that he attracted a group of boys who followed him regularly.

As he grew older and grew in the practice of his Catholic Faith, John would encourage the town boys to join him in prayers, such as the rosary, promising to perform his stunts or tricks for them afterward.

The boys looked forward to whatever activity John had prepared, and never objected to the prayers he taught them before the fun.

From a very young age, John wanted to become a priest, but he could not even read. His mother always encouraged him in his prayers and in memorizing what he learned in church.

Through his mother’s determination to help him, and her wisdom in sending him to live in town where he could receive daily religious instruction from a parish priest, John was able to learn how to read and to learn more about his Catholic Faith.

He also learned various trades as he worked to make enough money to pay his rent.

At the age of twenty, John Bosco entered the seminary. Because he had not been able to read for many years, he had developed an amazing memory, which helped him overcome the great difficulties of his studies. Continuing to work to pay his tuition, he finally graduated from the seminary six years later.

Almost immediately, Father John Bosco started organizing older boys to be leaders of a group of younger boys, for the purpose of teaching them the Catholic Faith. In order to help more boys, he started the unusual practice of walking the streets after dark, when the poor and uneducated boys and girls were gathering in the streets to rob people or businesses.

It was clear to John Bosco that boys and girls became criminals because they were poor, uneducated, and untrained to do any work.

Determined to save poor boys, and eventually, poor girls, he would entertain them in the streets with various juggling or magic tricks that he had learned when he was younger, and then take them home to give them food, clothing, and a clean place to sleep. Once Father Bosco had provided for their immediate material needs, he would then start teaching them a trade.

Father John Bosco knew that boys and young men want to work and want to live a good life. He recognized that if the wayward boys could be trained in some trade, this would give him their attention, so that they would listen to his teaching about the Catholic Faith. They would become good citizens and good practicing Catholics.

He began asking employers to hire his boys. He asked citizens to help train his boys in operating equipment, in repairing and building, and even in sewing, as tailors were in great demand. Father Bosco was so successful with pulling boys off the streets that donations poured in.

Many miracles happened as the local business owners provided land, equipment, and buildings in which to teach the boys and to house them, and citizens donated money and clothes to provide for the boys’ needs until they could begin working at a paying job.

Father said Mass for the boys every day, and gently led them to the practice of the Catholic Faith.

Father Bosco’s story reminds us homeschooling parents how important it is to provide physical education and practical work for our children. My boys had time outside for football and baseball with their dad. In bad weather, they spent time with indoor physical activities such as jump-rope tricks, and helped with the laundry and other active jobs around the house.

We should never forget the importance of physical activity, even while we work to instruct our children’s minds and hearts.

Seton sells a book for 3rd to 5th graders called A Story of St. John Bosco, and a book for 5th grade through high school students called Saint John Bosco.