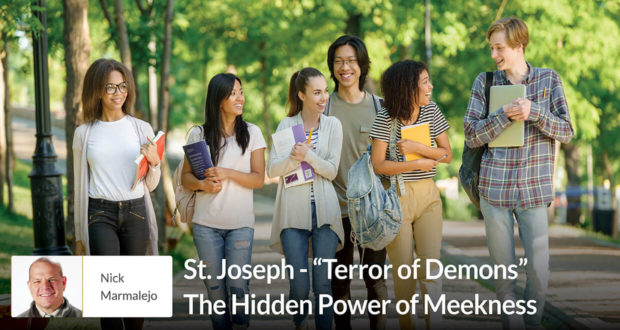 St. Joseph – “Terror of Demons” The Hidden Power of Meekness

College-bound? To witness for Christ in the post-COVID world be meek like St. Joseph, “Terror of Demons”, the quiet and confident professional of Faith.

I began my classes to obtain a Virginia teaching license years ago, I was exposed to a variety of veteran leaders from the public school system.

After a brief introduction one of the most captivating instructors, Dr. Jim, a fellow hockey fan and county level administrator, asked us all some rhetorical questions: “Why are you here? Why do you want to be a teacher? Why are you in education?”

Before anyone could respond, he stated, “If it’s not because of the kids, then get out [now]!”

The class looked at each other. He was serious. Dr. Jim explained how kids and even adults have enough bad things with which to deal than to have another egotistical, self-seeking educator added to the mix.

The class was memorable and an edifying reminder that being a teacher, at least to the mind of this public official, was more about serving others’ educational needs than an educator’s self-interest.

I am sure there are others (aka saints) more qualified than me to talk about meekness. To my mind, meekness really gets a bad rap as a virtue.

At a glance it just doesn’t seem attractive—it rhymes with weakness and brings to mind images of a mouse cowering in a corner or running from a cat. St. Joseph, as we know, is celebrated as being meek yet one of his titles is also “Terror of Demons.”

This invites some reflection.

Perhaps one way to look at the virtue of meekness, when we think of Jesus and the saints, is to consider it as active non self-aggrandizement.

An apt analogy might be that of the quiet professional. He has no need to sell himself as great to anyone. He just is. He goes about his business, knowing his place in the world, the scheme of things, and gets the job done, whatever that might be. This kind of confidence is compelling.

Relate this sort of steadfastness to living the life of faith and truth, and the title “Terror of Demons,” when applied to St. Joseph begins to take on greater color and context. He is indomitable, self-possessed, and completely guided by God.

That sounds like a good recipe for “Terror of Demons” to me.

A Culture of Hatred

It may not come as any surprise to you that meekness is not particularly popular as a virtue right now in our culture. Instead, being with the times means reacting quickly with anger and seeking to overcome one’s enemies with hatred. This abandonment of right reason is now being taken to extreme after extreme. Frankly, it is alarming.

The rub is that schools and universities are now actively implementing anti-religious policies and narratives. Faith, reason, and, common sense are under assault in various ways. Speech is no longer free and Christian symbols of Faith are now besieged due to being considered “offensive.” Take the recent example of the University of Turin telling students they cannot have the cross on their wall or statues of the Virgin Mary nearby when on camera in their homes because they are deemed offensive.

Directives such as this replace the interest of the student with the self-interest of Dr. Jim’s overreaching educators. The days of pluralism and tolerance for differing views in mainstream higher education are seemingly over. Students have several options when faced with these mandates if and when they come: Fly under the radar, resist, leave, or comply.

Seton’s education is designed to build your understanding of Catholicism and Catholic identity. As noted above, however, secular colleges and schools will increasingly contest this identity in the post-COVID world.

So dear students, especially those of you attending secular schools, recognize that you are going to be increasingly challenged. Many adherents to worldly ideology are not willing to engage in an open conversation. This means you will need to use all of your knowledge, skills, and abilities to sidestep the traps so cleverly laid out for you by the Dark One. You must be equally clever, choose your battles wisely, and live by your wits even as you remain steadfast in your Faith and prayer.

Understanding the philosophy of how the pieces are laid on this new chess board gives you an edge in your position and how to move forward. The better news is that we have the Christ and the truth on our side. Being meek like St. Joseph, the quiet and confident professional of Faith, is but one way to be a living witness for Christ in the world. Let us actively call upon his protection and guidance as we consider our futures, in education or otherwise, as we take up the cross of his Son.