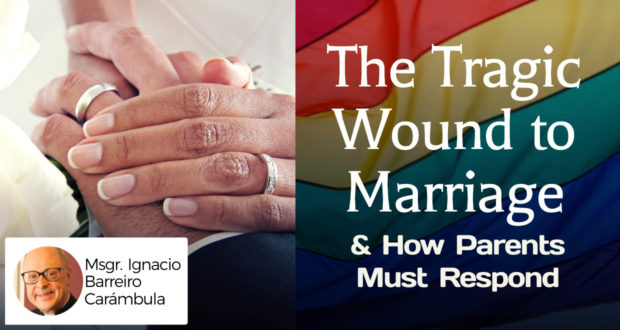 The Tragic Wound to Marriage & How Parents Must Respond

We must understand well the gravity of the wound inflicted to marriage and to families by the tragic decision of the Supreme Court on June 26th, in the case Obergefell v. Hodges.

This ruling states that the U.S. Constitution requires all states to issue marriage licenses to homosexual couples and to recognize same-sex “marriages” performed in other states.

This redefinition of marriage by the Supreme Court is a profound wound against the family because it gives the approval of the positive law to a very serious immoral conduct that disfigures the understanding of marriage and the family.

If we were to remain silent, we would be cooperating in a grave injustice committed against God, Who is the King of the Universe, against the family, and against children.

The Nature of Marriage

We must understand first and foremost that the nature of marriage is enshrined in natural law. We know well that the natural law of God is inscribed in the conscience of every human being at the moment of the creation of his immortal soul.

As a consequence, all men of good will can realize that marriage is the permanent union between a man and a woman, leading to the procreation of children. We must insist that the essential and distinctive element of marriage is procreation.

Obviously, unity and mutual support are very much necessary for the proper growth and maturation of the couple as good educators of their children. However, undue emphasis on unity and companionship opens the door to justifying homosexual “marriage.”

Christ sanctifies marriage as a sacrament for the baptized, enriching this natural union with strong graces that strengthen the couple to be generous in the transmission of life and with graces that fortify their union. Political society should protect marriage and the family because both are basic pillars of society and both are essential to its common good.

Hence the decision to change this truth about marriage in civil law is an affront to human reason and to the common good of society. The Supreme Court decision is mainly an affront against God. We must remember that unnatural vice is one of the four sins that cry to Heaven for vengeance.

Any attempt of political society to change the meaning and nature of marriage is an invalid decision which cannot bind in conscience any person who acts in accordance with natural reason and Christian revelation.

St. Thomas Aquinas defines law as “a certain dictate of reason for the common good, made by him who has the care of the community and promulgation.” (ST. Ia-IIae, Q.90, art.4). In light of this definition, we can clearly see the substantial invalidity of the Supreme Court’s decision. It is neither an ordinance of reason nor a decision that will build the common good of society. Rather, it is an irrational dictate for the common evil of society.

Thus, a person acting in accordance with natural law, when requested to implement this decision of the Supreme Court, should present a conscience objection. Let’s remember that throughout its history, the Supreme Court has made some truly horrible decisions.

We recall the Dred Scott decision of 1857 that denied citizenship to African-Americans, the Buck v. Bell ruling in 1927 that permitted forced sterilization, and in our times, the Roe v. Wade decision that justified a totally non-existent “constitutional” right to abortion.

This recent ruling against marriage wounds the family because it will spread in society the very erroneous notion that marriage is the union between two persons independent of their sexual differences.

It is a tragic mistake to say that a human person has the right to act in accordance with sexual inclinations that are contradictory to biological sex. Positive law, and judicial decisions that function as law, enforce or permit determined types of conduct that are willed by the legislator, even if they are contrary to right reason.

Law has a pedagogical, teaching function. Law tries to educate society on the supposed “goodness” of certain behaviors, mandated or permitted by the law. Consequently, a judicial decision that requires all states to license and recognize “same-sex marriage” teaches society, particularly its most vulnerable members, the children, that this type of “marriage” is equivalent to natural marriage.

This ruling teaches that these unions can and should be considered a form of natural marriage. This decision also teaches that each person is free to choose his sexual orientation. This is particularly serious in the American culture which is grounded in a strong respect for the law. That is why we must fight with all our energies to have good laws in society. Good laws are in agreement with the nature that the Lord has given to us.

Remember that only just laws are valid laws.

Children who attend schools that are ready to compromise with the relativistic ideology, will receive a deformed and anti-natural instruction on the nature of marriage. There is a growing urgency that parents should take full control of the education of their children.

Parents have the right and duty to be the primary educators of their children. Whenever it is possible, parents should be ready to seriously consider homeschooling their children. Parents must instruct their children on the nature of marriage, especially now when society will hold, under the influence of this Supreme Court decision, a totally erroneous view of marriage.

We must be aware that this tragic decision of the Court could be part of the war against religious freedom, so the right of parents to educate their children may be placed in serious jeopardy. Parents must be ready to take a stand against the forces that want to corrupt their children. Parents must use all the means that God has placed at their disposal, using right reason and making all the necessary provisions in their defense of natural marriage.

As Father Shenan J. Boquet, the President of Human Life International, has pointed out recently:

“This is not the first time the courts have rejected the law of nature and nature’s God, but it is perhaps the most flagrant such rejection, and it is time for Christians to realize that if they do not unite and fight now, that their very beliefs will be outlawed.”

Parents, in discharging the difficult task of educating their children to become good and faithful Catholics in the midst of an increasing adverse society, should have the firm confidence that the Lord will grant them all the graces necessary to discharge their tasks.

The grace of the Lord and the intercession of Our Lady will grant them the strength necessary to move ahead in a growing hostile environment. In this adverse environment, I strongly suggest that parents form associations or participate in groups to support each other in this fundamental task.

Parents and all members of society who are outraged by this decision should be moved by the supernatural virtue of hope that the truths about life and family will once again prevail in society because, as St. Thomas Aquinas pointed out many times, “Nothing that is against nature can endure.”