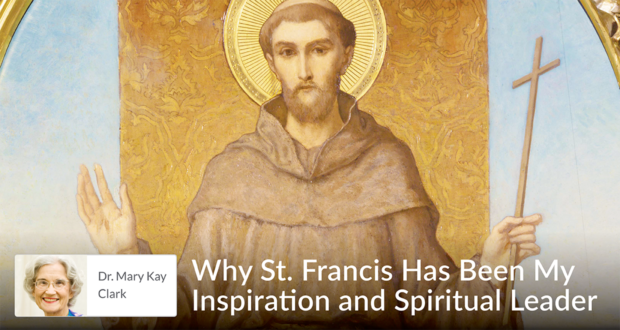 Why St. Francis Has Been My Inspiration and Spiritual Leader

St. Francis is an inspiration and spiritual leader when raising children in the Faith, helping us teach the Faith, live the Faith, and be better parents.

St. Francis of Assisi has had a great influence in my life.

He came into my life unexpectedly when a group of adults decided to establish a Franciscan prayer group headed up by a Franciscan priest at the Josephenum Seminary, just north of Columbus, Ohio where I was living at the time.

I wanted a stronger spiritual life because of my many responsibilities as a home schooling mom of two high schoolers plus being the principal of a Catholic elementary school I established with some other parents.

Life as a Third Order Franciscan

As Third Order Franciscans, we not only prayed daily Franciscan prayers, but also dedicated our lives to being better parents, husbands, and wives. The Franciscan priest was aware of the “changes” that were being made and the difficulties people had to adjust to them. But most of all, he was aware of the confusion among Catholic parents who learned the Faith when they were growing up and now found their children learning something seemingly different than what they were taught.

Many practicing Catholic parents needed to cling to the Faith tighter than ever before. We all agreed to turn to St. Francis of Assisi and said prayers to him daily to help us understand the “changes” in the practice of the Faith. We knew, of course, that Catholic teaching could never change. In fact, the books at the Seminary provided us with strong Catholic teaching.

We Third Order Franciscans realized we needed not only to cling to the Faith and teach it to our children as we had been taught, but also to recognize the importance of daily Mass and daily Communion. In addition, we were encouraged by the weekly prayer meetings with the faithful priest from the seminary.

St. Francis was both our inspiration and spiritual leader during the difficult times of raising our children in the Faith we had learned and were determined to keep. We realized our responsibility as parents was not to leave the teaching of the Faith to others, but to be responsible for teaching the Faith and living the Faith ourselves, as leaders for our children.

I personally can never thank St. Francis enough for his help in understanding and practicing the Faith. I am looking forward to meeting other Franciscan members in Heaven. I know we will have a special “party” with the wonderful, holy, blessed St. Francis!