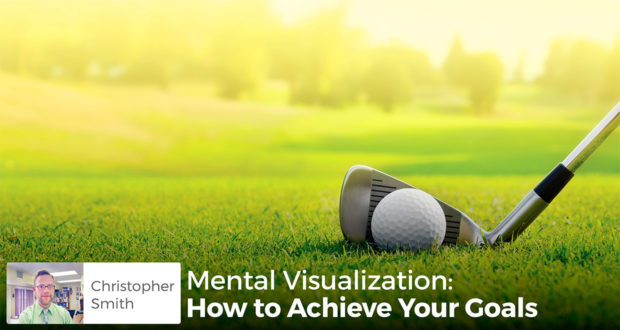 Mental Visualization: How to Achieve Your Goals

Be it virtue or academic success, Chris Smith offers that It’s simple to see why focusing internally on your life’s goals will make them easier to achieve.

When I was a young lad, my father decided it would be a good idea to teach me how to golf.

I am sure he did this out of love, but I still question his decision to this day.

I can think of few activities that are more brutally destructive to the psyche of the beginner, as well as that of the instructor.

The fact that we still speak to each other is a small miracle. Granted, most of our strife had to do with my still uncontrolled temper and general lack of virtue as a 7 year old, but we worked through it.

There was one particular lesson that sunk in between the screaming and club throwing that ultimately led to my grasping the sport (Yes, golf is sport, so stop snickering). My father told me to visualize where I wanted the ball to go, to stare down the fairway to the actual point.

His reasoning was not a practice in New Age meditation, but a belief that by focusing on that point in my mind, going through the steps I would physically need to accomplish for my ball to hit that exact spot, the body would naturally follow suit.

And by golly, it worked! And I believe this principle works not just in sports, but in all aspects of life.

Again, this act of visualization is not some bizarre and foreign concept. As humans, what we practice internally manifests itself outwardly.

A good example would be living a life of virtue. The more we habituate good acts, the easier it becomes to remain virtuous.

And many of the instances of practicing virtue are internal exercises, a visualization of reaching the goal of virtuous action. With this view of human nature, it is not hard to see why focusing internally on any life goal will make that goal easier to achieve, be it virtue or academic success.

With many of you students returning to your schooling in the next few months, I would suggest that you take my dad’s advice and apply it to the upcoming year.

Wherever you are in your schooling, there are always goals to achieve: increasing your GPA, crushing the SAT, getting that scholarship to your dream college. These are the points you should be focusing on now, down the fairway so to speak. Think out the steps you will need to take to achieve these goals, go over them in your mind regularly.

I guarantee that this will be beneficial in actually carrying out the steps needed to meet these goals.

Christopher Smith is the Director of Guidance at Seton. He has an M.A. in National Security and Statecraft from the Institute of World Politics in Washington D.C. He received a B.A. in Philosophy from Christendom College and is currently working on an M.S. in Education from Franciscan University.
academics activities christopher christopher-smith goal golf good acts gpa habits sat smith visualization vurtue 2016-08-10
Contributing Writers