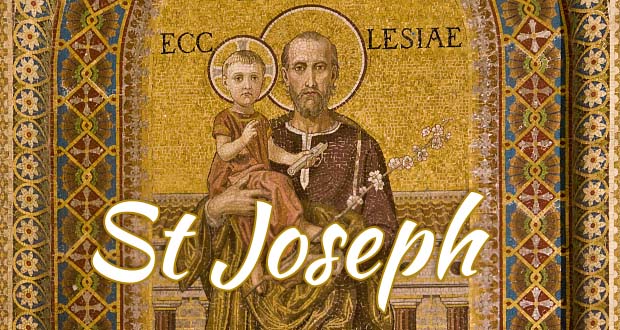 The month of March is dedicated to Saint Joseph.  Chosen by God to be the foster-father of Jesus, Saint Joseph is perhaps the greatest saint, the one person, after Mary, closest to the Heart of Jesus.  Scripture refers to him as a “just man.”  Saint Joseph’s justice is clear in his relationship with God, with his family, and in his work.

A Model of Trust

Joseph showed great trust in God and faithful obedience to His Laws.  He trusted God’s messenger, the Archangel Gabriel, when told to take Mary as his wife.  Joseph probably did not understand God’s plan fully, but he trusted and obeyed without question.  He trusted God again when he was told to take his family to Egypt to save Jesus from Herod.  Joseph was also faithful to the law of Moses.  He took the Baby Jesus to be presented in the Temple, “as it is written in the law of the Lord” (Lk. 2:23).

Saint Joseph’s actions are meant to be imitated.  Fathers, ask yourselves, “Do I trust God to help me provide for my family, even when I don’t see His Will clearly, and when my family’s security and livelihood are in danger?  Am I faithful in obeying God’s Laws, down to the small details?”

Saint Joseph is a model of justice in his relationship with his family.  He had an incredibly demanding vocation: to protect and provide for the Son of God and His Mother.  Which father would not tremble at such a responsibility?  Today, our society and even our nation’s laws deny the value of fatherhood.

It is hardly surprising that men listen to what is told them—that they are unnecessary in the lives of their children—and act accordingly.  Our world is full of irresponsible fathers and broken homes.

Today, more than ever, men need to turn to Saint Joseph for inspiration.  Joseph accepted his responsibility as head of the Holy Family.  He had free will; he could have said “no.”  He could have said that the Child was not his, and refused to spend all his energy and money to provide for Him.  Many of us in Joseph’s position probably would have made the excuse: “I didn’t choose this; it is not my responsibility; I want to live my own life, with children that I can call my own.”  But he did not.  Saint Joseph did what God asked of him and took Mary and her unborn Child into his home.

Heading up the Holiness

There is another lesson here.  As good as he was, Joseph was not as holy as Mary.  Yet, God chose him to be the head of the Holy Family.  Mary and Jesus followed him and submitted to him.  God has ordained that the husband should be the head of the family.  This is not because men are better or wiser than their wives.

God gave men and women different strengths and different roles.  He chose men to be leaders, not to fulfill their own selfish desires, but that they might serve those entrusted to their care and even be willing to die for them, as Christ died for His Bride, the Church.  We can be sure that Saint Joseph would have died for his Family.

Finally, Joseph is the model for all workers.  He is Saint Joseph the Worker.  Often, work can seem like mere drudgery.  The Catechism of the Catholic Church, however, tells us that work is not only necessary, but good and even sanctifying.

The Catechism says, “Work honors the Creator’s gifts and the talents received from him.  It can also be redemptive.  By enduring the hardship of work in union with Jesus, the carpenter of Nazareth … man collaborates in a certain fashion with the Son of God in his redemptive work” (2427).

Saint Joseph certainly made good use of the talents God gave him.  The items he made in his carpentry shop must have been valued for their quality craftsmanship.  Joseph endured the hardship of work, as well.  His hands must have been rough and covered with cuts and scrapes.  He was a poor man, but he labored honestly.

We homeschooling families should pray to Saint Joseph for guidance and protection.  Fathers especially should take him as their model.  When faced with poverty, unemployment, temptation, or doubt, turn to Saint Joseph.

Saint Joseph the Just, pray for us!

Sarah Rose is Copy Editor for Seton Magazine. She graduated from Christendom College in 2008 with a B.A. in Philosophy. She and her husband Matthew were married in June 2013, and their first baby was born in April.