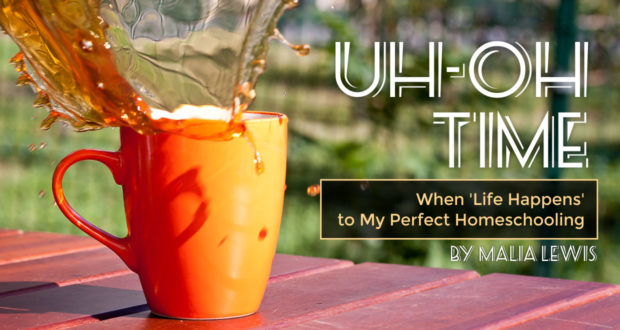 Uh-Oh Time: When ‘Life Happens’ to My Perfect Homeschooling

People often assume that homeschoolers must be really disciplined and have everything on a perfect, tight schedule. How else can we get it all done?

I have a confession. My son recently took over a month to write a book report. Not to read the book and write the report, just the writing part.

Oh, and my daughter stayed on the same math problem for an entire day.

We also skipped some days of planned school. And I am okay with this.

Recently, my son got pinkeye and, according to him, he couldn’t do his work that day. This was even after we spent three hours going to the doctor and getting a prescription. He seemed to have no problem seeing when he wanted to play a video game, so I guess the eye drops were working. (No, he didn’t get to play.)

Then there was the day my daughter was really nervous about a piece for the string orchestra. She wanted to practice her violin before the concert that evening.

My other child had a rough night with allergy issues, so I let her sleep in the next morning. (I secretly wanted to also, because guess who was up with her the night before?). And I am okay with this, too.

My first year homeschooling, I had it all planned out. My kids would wake up at a certain time, get ready for “school,” and we would learn in the perfect environment. Then we would break for lunch and do chores or crafts.

Then there would be free time while I cooked a dinner from scratch for my husband. I wouldn’t answer phone calls before a certain time, and all appointments and activities would be limited to after school hours.

Yes, there are people who do this. But I am not one of them. To be honest, I don’t know any of these people. I just hear about them. They are mythical like unicorns and the ‘perfect hair’ day.

Don’t get me wrong, we have a basic schedule and we try to stick to it. But then stuff happens. Let me rephrase that: Life happens. Proverbs 16:9 reads, “The heart of man plans his way, but the Lord establishes his steps.”

I always took that to mean, “Man makes plans and God laughs.”

My husband is a soldier, so our schedule is subject to change at any minute. That alone forces me to be more flexible than some. But, just being a parent requires flexibility.

Every parent can probably empathize with trying to leave the house with kids. You know the problems: the diaper that started leaking, the kid who has on one shoe (or two different shoes) or the one who decides now is the time to actually get dressed to go.

When leaving with the kids, I try to give myself an extra ten minutes for these incidents. I call it “uh-oh” time.

I had been a mom for a while when I started homeschooling, so I knew to plan for these mishaps. Then one day I realized that kids need “uh-oh” time in their learning. Some concepts don’t catch on in the forty-five minutes you allotted for history or science.

So my son taking a month to finish his book report? It’s because I made him go back through the book, a chapter at a time, to really understand what he was reading.

The math problem my daughter stayed on for an hour? We stopped to review a concept that she missed somewhere along the way. I began to focus more on them learning the concept and not just getting the work done.

The joy I saw when it clicked was so much more fulfilling than being able to say they finished by a certain time.

Of course, stopping to finish these things meant we were thrown off our schedule. But you know what? It was okay. After that first year, I stopped feeling stressed when something threw off our schedule. I also planned for more breaks and “uh-oh” time.

So when something came up that required us to skip a day, I was less stressed about catching up and able to focus more on the event at hand. Things like spending time with my husband before or after deployment, being able to visit with grandparents who live far away, and attending Holy Day services as a family, all were more pleasant for me.

My Baptist grandmother would often say that those little issues that come up before church (torn stockings, missing shoes, clothes not fitting) were the devil’s way of trying to keep you from going to worship the Lord. Even if you attended anyway, you were frazzled and not in the right state of mind when you got to church.

She would always remind me to focus on the finish line instead of the bumps along the way. Those bumps that I call “uh-oh” moments can either be stumbling blocks or stepping stones.

As much as possible, I try to apply that same logic to homeschooling and my family life. Don’t get me wrong, I have mini nervous breakdowns here and there. Some things are truly frustrating, and no amount of positive thinking makes them better. But each experience, each bump, is a learning lesson.

If we keep hitting the same bump, then maybe we didn’t learn the lesson the first time around. Even though I cannot possibly plan for every possible thing, I can plan to handle it with as much grace as possible.

So when life throws bumps my way in the form of disorganization, last minute plans, and worse, I can sometimes say, “Uh-oh.” This is followed by a quick prayer for peace and then, “It’s okay.”